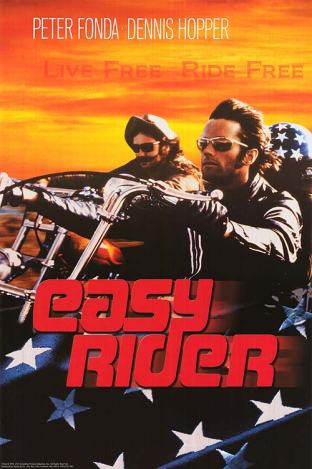 At the beginning of the 1969 independent cult classic film “Easy Rider,” the lead characters meet with a high-rolling drug dealer to sell him a large quantity of cocaine, after which they take the money, hop on their California-style Harley choppers and head out on the open road.  Accompanying these scenes are two iconic hard rock songs that perfectly complement the story:  “The Pusher” and “Born to Be Wild” by Steppenwolf.

Music and movies have gone together like oil and vinegar since, well, pretty much ever since there have been movies.  From Al Jolson’s “The Jazz Singer” (1927) through the many dozens of big-screen musicals of the ’30s, ’40s and ’50s, songs played a pivotal role in moving the plot along, usually sung on screen by actors as part of the story.  In the modern era, film makers increasingly used popular songs over the opening and closing credits as well.  And when rock and roll music arrived in the mid-’50s, rock tunes and cinema began a marriage that has only grown stronger and more pervasive with each passing year.

Film historians point to the 1955 drama “The Blackboard Jungle,” starring Glenn Ford and a young Sidney Poitier, as the first use of rock music in the movies.  It depicts a teacher in an inner-city high school coping with “juvenile delinquents,” as gangs and troublemakers were called at the time, and the director chose to use a little known B-side by Bill Haley and His Comets called “Rock Around the Clock” during the opening and closing credits.  This helped send the song to the top of the pop charts as the first classic rock and roll song and led to a huge teenage audience at the film’s box office.

Seeing dollar signs in their eyes, producers rushed to release dozens of cheaply produced flicks attempted to capitalize on the hot new musical craze (“High School Confidential” and “Go Johnny Go,” among many others), using performances by popular R&R artists like Little Richard, Chuck Berry, Jerry Lee Lewis, Gene Vincent, Eddie Cochran and others to spice up the crummy stories and wooden acting.  There were a few decent films, like 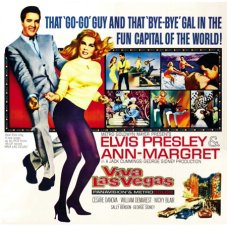 the Jayne Mansfield vehicle “The Girl Can’t Help It,” but most are forgettable and unintentionally hilarious in retrospect.

And let’s not forget Elvis Presley, The King of not only rock ‘n roll but some of the lamest B-movies of the period that existed solely as an excuse to let him showcase his latest songs on film.  Again, there were a few notable exceptions, like “Kid Creole” (1958) and “Viva Las Vegas” (1964), which offered passable scripts and big-name stars like Ann-Margret in supporting roles.  But clearly, the rock music was the best thing these flicks had going for them.

Some say the beginning of incorporating rock music into successful, critically acclaimed films was in the early James Bond movies with Sean Connery.  The electric guitar riff that dominates Monty Norman’s “James Bond Theme,” arranged by John Barry, anchored the

debut film, “Dr. No,” and has been used in one form or another in every Bond film since. I’m not sure if Shirley Bassey’s “Goldfinger,” Tom Jones’ “Thunderball” or Nancy Sinatra’s “You Only Live Twice” qualify as rock music per se, but they were a far cry from the strings-laden ballads that served as theme songs for most films of that time.  (The first use of a true rock song in a Bond film would have to wait until 1973 with Paul McCartney’s “Live and Let Die.”)

Maybe it’s better to peg the beginning with The Beatles’ well-received 1964 documentary, “A Hard Day’s Night,” and its zany sequel, 1965’s “Help!”  These were relatively flimsy screenplays that served mostly to feature the Fab Four on the silver screen, playing their latest batch of irrepressible tunes.  By 1966, bonafide rock songs showed up in serious films like Michelangelo Antonioni’s award-winning thriller “Blow-Up,” where The Yardbirds (with Jimmy Page and Jeff Beck in the lineup) were seen in a pivotal nightclub scene bashing through a rendition of “Stroll On.” 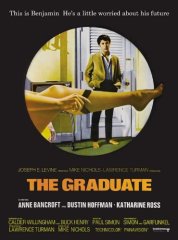 Director Mike Nichols’ use of Simon & Garfunkel’s songs “The Sound of Silence” and “Scarborough Fair” and particularly “Mrs. Robinson” in the soundtrack of the seminal coming-of-age film “The Graduate (1967) was an important milestone in rock music (or at least folk rock) playing a significant role in capturing the mood of the film in which it’s featured.  Similarly, Nilsson’s folk rock tune “Everybody’s Talkin'” made an indelible impression in the early moments of the Oscar-winning drama “Midnight Cowboy” in 1969, and BJ Thomas’ #1 hit “Raindrops Keep Fallin’ On My Head” was the music behind one of the more memorable scenes from “Butch Cassidy and the Sundance Kid” the same year.

But many critics believe the marriage between rock music and film truly began with the previously mentioned “Easy Rider,” with a soundtrack that also included Jimi Hendrix’s “If 6 Was 9,” The Band’s “The Weight,” and The Byrds’ “The Ballad of Easy Rider.” These and other counterculture tracks offered ideal background music to complement the ultimately tragic story of two hippies on motorcycles out to find America.

By 1970, the floodgates opened with the hugely successful rock festival documentary “Woodstock” (and its #1 soundtrack album), which pushed the boundaries established by 1967’s minor classic “Monterey Pop” in showcasing the top rock music artists of the day. These were the forerunners to the high quality concert films of the ’70s and ’80s, most notably Martin Scorsese’s “The Last Waltz” (featuring The Band, Bob Dylan, Eric Clapton, Joni Mitchell, Van Morrison, and Neil Young) and Jonathan Demme’s extraordinary 1984 Talking Heads tour de force “Stop Making Sense.”

Try to imagine George Lucas’s 1973 classic “American Graffiti” without its soundtrack. You can’t do it.  Forty different songs from the late ’50s and early ’60s helped paint a vivid picture of what life was like on that Southern California night in the summer of ’62, and 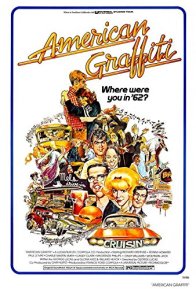 the soundtrack LP sold many millions of copies.  The same goes for the 1978 frat comedy “Animal House,” also set in 1962, which brilliantly used great R&B tracks like “Twistin’ the Night Away,” “Tossin’ and Turnin'” and particularly “Shout” in the toga party scene.

The momentum continued to build for movies that made rock music an integral part of the plot.  Disco was the whole point of 1977’s “Saturday Nite Fever”; Bette Midler starred in “The Rose” (1979) as a rock singer in the Janis Joplin mold;  legendary animator Ralph Bakshi’s criminally underrated “American Pop” (1981) ambitiously used rotoscope technology to tell the evolution of rock ‘n roll up to that point; Sean Penn’s debut as Spicoli in the teen classic “Fast Times at Ridgemont High” (1982) made liberal use of great ’80s rock songs by Jackson Browne, Sammy Hagar, Joe Walsh, The Cars and the Go-Go’s; the reunion of former campus radicals for a friend’s funeral depicted in 1983’s “The Big Chill” was complemented by a smorgasbord of Motown and other Sixties classics; and Rob Reiner’s mockumentary “This is Spinal Tap” (1984), a deliciously wry parody of ’80s hair bands and arena rock, featured fake (but not all that bad) hard rock songs written by Reiner and actors Christopher Guest and Michael McKean.

At the same time, celebrated directors began recognizing how effective certain specific rock tracks could be to create or sustain a mood or drive home a key plot point.  Francis Ford Coppola struck gold when he selected The Doors’ ominous “The End” to underscore

devastating scenes from the 1979 Vietnam epic, “Apocalypse Now.”  One of the funniest moments in the Lorne Michaels production “Wayne’s World” (1992), which turned a popular Saturday Night Live sketch into a full-length movie, is when Wayne and Garth are driving around, aggressively grooving to the strains of Queen’s operatic “Bohemian Rhapsody.”

Newer generations of writers and directors are getting ever better at weaving great rock music into the flow of their movies.  Quentin Tarantino bizarrely juxtaposed the 1973 ditty “Stuck in the Middle With You” against a shocking torture scene in his landmark “Reservoir Dogs” (1992), and his use of cultural touchstones like Chuck Berry’s “You Never Can Tell” and Neil Diamond’s “You’ll Be a Woman Soon” in his Oscar-winning “Pulp Fiction” is indelibly etched in the minds of all who saw it.  Cameron Crowe also deftly used rock songs in two of his best efforts.  In the climax of the romantic comedy “Say Anything” (1989), John Cusack’s character holds up a boom box outside the house of the girl he loves (Ione Skye), blasting Peter Gabriel’s

“In Your Eyes” because the lyrics say what he is unable to articulate.  In “Almost Famous” (2000), Crowe’s brilliant autobiographical flick about rock journalism and debauched rock tours, Elton John’s “Tiny Dancer” becomes the glue that reconnects the feuding band members as it plays on the sound system of their tour bus.

Naturally, there are many, many examples of excessive or ineffective use of rock music in cinema, which we needn’t go into here.  But more often than not, rock in all its forms (vintage, psychedelic, country, R&B, folk, punk, disco, new wave, hip hop, Americana, electronica) seems to be an excellent companion for movies, and for television shows as well.  It looks like it’s a marriage meant to last.