vocalist Freddie Mercury in the Queen biopic “Bohemian Rhapsody,” and the movie itself won for Best Drama, it’s high time I address this film and the mixed reaction to it among the press and the public.

First, though, I want to make a point about biopics and how they differ from documentaries.

A biopic, by definition, is a biographical movie.  It offers a director’s subjective retelling of a real person’s life story using actors and a screenplay to produce a finished work of cinematic entertainment.

In a documentary, on the other hand, the director uses actual film clips of the subject, interviews of those who knew the subject, and some sort of narration, assembling all these pieces to tell the person’s life story more like a news feature.

The most important difference between the two is that a biopic’s primary purpose is to entertain, while a documentary is meant to inform.  Biopics sometimes tell only a portion of the story, glossing over or even omitting certain elements in order to focus on what the director feels are the most dramatic or crowd-pleasing aspects of the subject’s life.  Because of this, biopics have sometimes been (fairly or unfairly) dismissed as Hollywood fabrications that fail to tell the “warts and all” characteristics that producers fear will alienate mainstream audiences.  If you want all the unpleasantness, they say, go 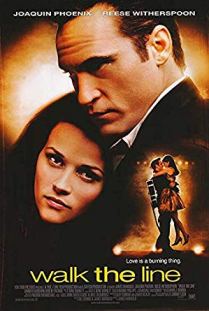 find a dreary documentary on the subject.

But if you take a look at the history of biopics of popular music artists, you’ll find that many of the best films hold back nothing, giving us the good and the bad in an attempt to tell the whole story.  In recent years especially, there have been many fine examples of biopics that avoid sugarcoating the subject’s life in favor of a more truthful exploration:

“Get On Up” (2014), with Chadwick Boseman’s riveting performance as The Godfather of Soul, James Brown

All of these films offer unflinching views of their subjects’ difficult stories, and all of them were nominated for, or won, Oscars or Golden Globes.

So this brings us to director Bryan Singer’s “Bohemian Rhapsody.”  It’s beautifully shot, it’s well acted by a top-notch cast, and it includes a dazzling in-concert sequence at film’s end.  Many people I know, including family members and music-loving friends, have raved about it, and they were consequently puzzled to learn a classic rock music fan like me had only a lukewarm response to it.

Indeed, at first I wrestled with this, trying to put my finger on what it was about the movie that didn’t quite sit right.  Then I took a look at some of the film critics’ reviews, and I happened upon an especially perceptive one in Variety, written by Owen Gleiberman.  It was like he was channeling me and putting into words exactly what I liked and didn’t like about the movie.

In a nutshell, it’s this:  Malek delivers a truly astonishing performance as Mercury, but 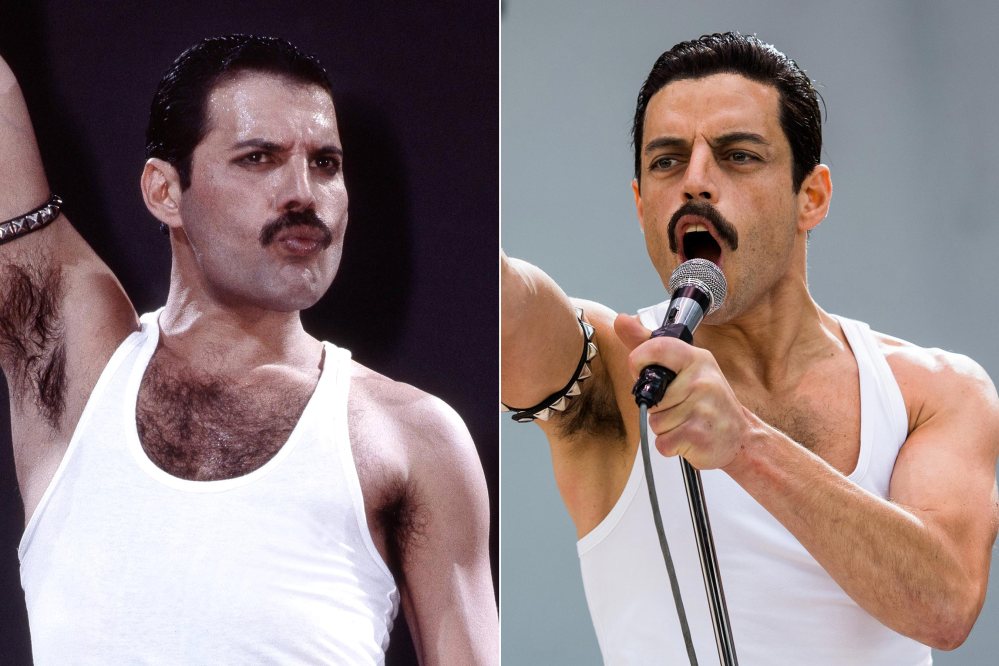 director Singer missed a golden opportunity to give us a truly authentic, penetrative look at what made Queen, and Mercury, tick.  As Glieberman put it:  “The movie, despite its electrifying subject, is a conventional, middle-of-the-road, cut-and-dried, play-it-safe, rather fuddy-duddy old-school biopic, a movie that skitters through events instead of sinking into them.”

Even more to the point is Glieberman’s view (and mine) that,  “It treats Freddie’s personal life — his sexual-romantic identity, his loneliness, his reckless adventures in gay leather clubs — with kid-glove reticence, so that even if the film isn’t telling major lies, you don’t feel you’re fully touching the real story either.”

It’s fairly remarkable that “Bohemian Rhapsody” took the Golden Globe for best drama, because it received the lowest score on the Rotten Tomatoes review-aggregate website (62% approval rating out of 335 reviews) of any film winner in nearly 40 years.  The majority of critics found Malek’s acting performance extraordinary but the film no better than average.  They described it as “sanitized,” “self-indulgent revisionist history,” and “a bit of a mess.”  The British film mag Empire said the flick was “a safe, competent, decidedly non-scandalous biopic.  It treats the life of Freddie Mercury with cautious affection, happy to play within the rules while depicting a man who did anything but.”

I’ve even read some comments from hard-core Queen fans who concede that, though they enjoyed the film, they felt it wasn’t entirely honest in the way it told us (or, more accurately, didn’t tell us) about Mercury’s conflicted sexual identity, which he kept hidden from the public and that ultimately led to his illness and premature death.

The movie takes artistic license by showing Mercury informing the band of his debilitating disease just prior to their monumental appearance at Live Aid, which makes his triumphant performance there seem more dramatic to the moviegoer.  In fact, Mercury wasn’t even officially diagnosed with AIDS until several years later, in 1988, and 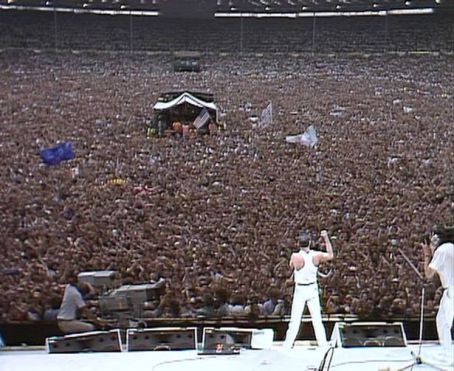 the audience learns nothing of Mercury’s slow, private demise in his final years because Singer chose to end the film following the Live Aid sequence.

That’s too bad, because Singer had an opportunity to show how incredibly heroic Mercury was as he soldiered on in the studio even while he was suffering mightily, producing some amazing vocal recordings on latter-day Queen tracks like “These Are the Days of Our Lives” and “The Show Must Go On.”

Brian May has said Mercury was increasingly ill and could barely walk during the 1990 sessions for the “Innuendo” LP.  “I was concerned whether he was physically capable of singing his parts, but he went in and killed it.  He completely lacerated the vocal.  He would come in for maybe an hour at a time, and he kept saying, ‘Write me more stuff.  I want to just sing this and do it, and when I’m gone, you can finish it off.’  He had no fear, really.”

Wow, what powerful, poignant scenes these would have been in the movie, but for reasons unknown, Singer neglected Mercury’s last chapter and how he withheld official announcement that he was suffering from AIDS until November 23, 1991.  He died the next day.

This is probably a good place to point out that there are at least a half-dozen documentaries about Queen and Mercury that delve far more deeply into the particulars of the singer’s quasi-mysterious private life and tragic end.  You might want to check out “Freddie Mercury:  The King of Queen” (2018), “Queen: Mercury Rising” (2011),  “Queen:  Days of Our Lives” (2011) or “Freddie Mercury:  The Great Pretender” (2012).

As a student of rock music and how great bands have made great recordings, I was disappointed that “Bohemian Rhapsody” didn’t spend more time showing us just how Mercury and Queen worked 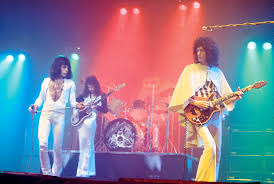 together in the ’70s to create their unique heavy metal/pop echo chamber wall of sound.  Together with producer Roy Thomas Baker, they were sonic experimentalists when they came up with the vocal acrobatics in “Killer Queen,” their 1974 breakthrough hit, and then took it all to stratospheric heights the following year with “Bohemian Rhapsody,” by all accounts a monumental, game-changing recording.

But no, this biopic offers almost nothing about any of that.  As Glieberman put it, “The merging of Mercury’s vaudeville jauntiness with Brian May’s guitar-god power, backed by the insane multi-tracking of the group’s voices into an infinitely mirrored chorus — that’s the invention of Queen’s singular sound, but it’s barely an afterthought in the movie.”

It rightly lavishes attention on the title track, but focuses more on the arguments with record executives regarding its length and suitability as a single than in how it came to be written and created in the first place.  The songwriting contributions from May, drummer Roger Taylor and bassist John Deacon are also given short shrift, an unforgivable omission given the key role their songs have played in Queen’s success (“You’re My Best Friend,” “’39,” “Keep Yourself Alive,” “Fat Bottomed Girls”).

“Bohemian Rhapsody” also fails to spend any time discussing Queen’s huge role as pioneers in the art and commerce of music videos.  Their “short film” released to coincide with the release of the “Bohemian Rhapsody” single in 1975 came out years before the birth of MTV or VH-1.  “It’s not an overstatement to say that video revolutionized the way music would be consumed in the 1980s and beyond,” said music journalist Paul Gambaccini.  “Every band suddenly started looking at how they could

make a video of their new single.”

Quite frankly, I’m not sure “Bohemian Rhapsody” might even be worthy of an entry in my blog if it weren’t for Malek’s jaw-dropping depiction of Mercury.  Queen’s surviving members May and Taylor insisted on approving the selection of actors who would play the key roles, and they were enthusiastic in their green-lighting of Malek as Mercury. From the stage strutting to the prosthetic overbite to the very convincing singing, Malek does a superlative job of channeling Mercury’s flamboyant, rock-god bravura.  As Peter Travers in Rolling Stone put it, “Malek digs so deep into the role that we can’t believe we’re not watching the real thing.”

Speaking of the real thing, Queen was indeed a mega-popular band from roughly 1975 to 1990 or so, particularly in their native UK, where 15 of their 17 LPs reached #1 or #2.  In the US, their five albums in the 1975-1980 period went multi-platinum before their popularity waned somewhat in the Eighties.  Even after (and perhaps because of)

Mercury’s death in 1991, Queen’s popularity surged, and seems to be stronger than ever today.  The use of “Bohemian Rhapsody” in the hit 1992 comedy “Wayne’s World” certainly didn’t hurt.

But I must confess that I was never much of a fan during their heyday.  I thought individual songs were compelling (the hard rock of “Keep Yourself Alive,” the rock-guitar-meets-cabaret of “Killer Queen,” the haunting, lovely “You Take My Breath Away,” the way-cool collaboration with David Bowie on “Under Pressure”), and I was drawn in by the broad appeal of their best LP, 1975’s “A Night at the Opera.”  As the band’s popularity grew, though, I found their material grew more pretentious and annoying.

I would be a very happy man if I never again have to hear “We Will Rock You,” “Bicycle Race” or “Another One Bites the Dust.”  Singles as irritating as those kept me from exploring their albums any further, which, in retrospect, was perhaps foolish on my part, because I could have discovered bonafide jewels like “Spread Your Wings,” the blues shuffle “Sleeping On the Sidewalk,” “It’s Late,” “Don’t Stop Me Now,” “Dragon Attack,” “Life is Real (Song for Lennon)” and “Man on the Prowl.”

I have come to respect the successful manner in which Queen dabbled in multiple genres, from progressive rock and glam rock to baroque pop and rockabilly.  It’s not every rock band that can pull off convincing forays into opera, gospel, ragtime and disco, and do so with professional theatricality.

Zanzibar had ambitious dreams and a ton of musical talent.  He developed uncommon confidence that he might one day be a larger-than-life singer in a rock band, and he knew he wasn’t going to get there with a name like Farrokh Bulsara.  He adopted the name Freddie while still in high school, and then when he joined the group that would become Queen, he completed his personal re-invention by choosing the last name Mercury (“the messenger of the Gods”).  He took to wearing a red robe and crown, projecting a decidedly regal authority on stage.

So, actually, from the very beginning of Queen’s career, this wasn’t his real life.  It was just fantasy.