To tell a story in a compelling way is an art; to do it to a melody is a wondrous thing.

For probably a thousand years or more, great stories of myth, legend and history have been told in song.  In the past century, the country, folk and blues genres have told hundreds and hundreds of tales of heartbreak, tales of war and famine, tales of love and tradition.  These story-songs had characters, a plot, and a message, much like a well-crafted short story in literature.

Not surprisingly, these ballads tended to last five or six minutes or longer, which largely prevented them from making the pop charts, where the average song lasted no more than three minutes, which is hardly enough time for the lyrics to say much of anything beyond “It’s my party and I’ll cry if I want to” or “I want to hold your hand.”

Still, some songwriters  — country, pop, rock — through the decades have shown a fine talent for telling riveting stories in a succinct enough way that they ended up as chart successes, with a beginning, middle and end, even if they went a little beyond the conventional song length.  I’ve selected a handful of tracks that offer a healthy cross section of story-songs from the ’50s, ’60s, ’70s and ’80s.  Some topped the singles charts, some were far more obscure tracks by major artists, but all are fascinating stories set to song.

Great story-songs paint an aural picture, a visual place where we can understand what’s going on with the lead characters.  In the case of this remembrance from Chapin’s real past, there’s Harry, the taxi driver, and Sue, the wealthy lady who was once his lover.  They meet again by chance when she hails his cab, and they share an uneasy moment.  “She was gonna be an actress, and I was gonna learn to fly…”  Neither one achieved their dreams, evidently, but as they part, he appears to be content just driving a cab, while she seems unhappy in whatever wealthy enclave she ended up.  Chapin’s debut single reached #24 on the pop charts in the fall of 1972.

The entire “Bat Out of Hell” album was worthy material for a Broadway stage play, with multiple stories about the exploits of numerous characters conjured up by lyricist Jim Steinman for his pal, Mr. Loaf, to sing.  None was more cinematic than “Paradise By the Dashboard Light,” the vivid story of a teenage boy hoping to seduce his girlfriend.  They volley back and forth until she asks for his undying love in exchange for a night of passion (“What’s it gonna be, boy, yes or no?”  “Let me sleep on it”).  It’s still acted out all these years later by boomer men and women at bars and parties across America. 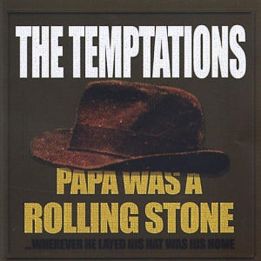 Motown artists were known for short, punchy dance tunes, but they weren’t opposed to taking a stab at the story-song.  The Temptations hit it big with this urban tale of a family who struggled to move on after their deadbeat father flew the coop and then died (“on the Third of September, a day I’ll always remember”).  It was originally recorded as an epic 12-minute track with multiple instrumental passages (including a nearly 4:00 introduction), and even the Top 40 version clocked in at nearly seven minutes.  The vocal group’s final #1 single set the tone for many more soul records that told stories over the next decade.

This song goes on and on with thirty (30!) triplets that tell the amusing story of a hippie from California who’s stuck in Mississippi with a flat tire and has to do some fast talking to avoid a beating from a gang of rough rednecks.  Standard country fare, perhaps, but it ended up on the mainstream Top 40 at #9 in the summer of 1973.  It helped expand the appeal of country rock beyond the confines of the Deep South, with numerous country-rock groups hitting the Top Ten over the next several years.

By the time of the “White Album,” the Beatles had tried just about everything in the way of song structure, so it was only a matter of time before they (actually Paul McCartney) came up with a story-song.  “Rocky Raccoon,” with an arrangement dominated by acoustic guitar and jangly piano, is basically a country-western yarn with McCartney front and center singing about South Dakota rivals Rocky and Dan, and the object of their competing affections, a girl named Magill (“who called herself Lil, but everyone knew her as Nancy”).

The late great Johnny Cash was deeply rooted in country music but periodically crossed over into the pop music scene, most notably with his #2 hit “A Boy Named Sue” in 1969.  The tune tells the story of a boy whose father left his family but not before naming his son Sue to make him strong and defiant in the face of adversity.  The boy hated the name, naturally, and eventually learned why his father had done this, but vowed to name his own son “Bill, or George, or any damn thing but Sue!” 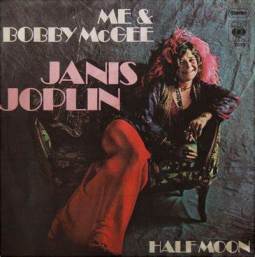 In 1969, songwriter Kris Kristofferson wrote this poignant story of two drifters (male and female) trying to make something of their hardscrabble lives.  It was first recorded by Roger Miller (a #12 hit on the country charts), then by Kristofferson himself, and then Gordon Lightfoot, and in those versions Bobby (Bobbi?) was the woman.  But then it was recorded by Janis Joplin in 1970 only a few days before her death, and Bobby became the male character.  Her version went to #1 on the pop charts in the spring of 1971 and remains the definitive rendition.

“The Wreck of the Edmund Fitzgerald,” Gordon Lightfoot, 1976 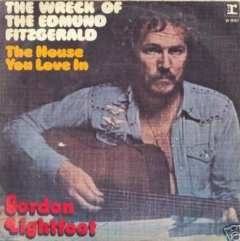 Canada’s folk hero had been recording and touring for more than ten years when he scored his biggest chart success with his ode to the sunken freighter.  It resonated with Americans and Canadians alike, especially those who lived near the Great Lakes and know all about the ferocious storms that have laid claim to dozens of vessels through the years.  It’s a great story artfully told but, frankly, one of Lightfoot’s more boring songs, featuring only three chords stretched out over seven verses.

Not so much a story as a historical treatise, “American Pie” took listeners on a journey, told in enigmatic language, through the evolution of rock and roll from its birth in 1955 to 1971, when the song was written.  It has earned a place as one of rock’s true anthems, with its veiled references to icons like Buddy Holly, Bob Dylan, The Beatles, The Byrds and The Rolling Stones, and events like Woodstock and Altamont, and how they changed both popular music and popular culture.

This sleepy, sultry number about a fictional Deep South tragedy would’ve worked perfectly in the soundtrack to “In the Heat of the Night,” the Oscar-winning movie from the same year.  As it is, the song was a big #1 hit on the pop charts for then-newcomer Gentry, who wrote it with sensitive, descriptive lyrics.  It tells the tale of a rural Mississippi family’s reaction to news of the suicide of local boy Billie Jo MacAllister at the Tallahatchie Bridge, the subsequent passing of the family patriarch, and the effects of the two deaths. 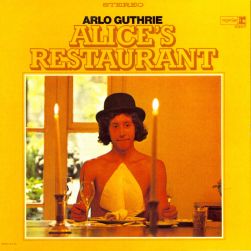 Perhaps the longest story in popular music (and subsequently made into a feature film), “Alice’s Restaurant” is an 18-minute rambling account (apparently true) of what happened to songwriter Guthrie in Stockbridge, Massachusetts, one Thanksgiving Day during the Vietnam War protest years.  It’s mostly comic and whimsical in the telling, although the underlying message is one of sadness and disbelief at the folly and absurdity of war as well as the justice system’s overreach.

This tale tugs at the heartstrings, as many Fogelberg songs do.  The narrator runs into his old girlfriend in the grocery store on Christmas Eve, and they end up drinking a six-pack in her car while recalling the good old times…but they say their goodbyes and, presumably, never cross paths again.  It struck a chord with many people who recall past flings and relationships, and Fogelberg deftly weaved in a few bars of “Auld Lang Syne” as the song concludes.  It reached #9 on the charts and still gets plenty of airplay during the Yuletide season. 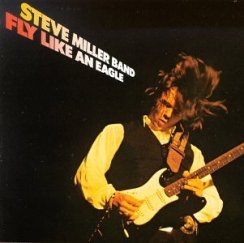 “This is the the story ’bout Billy Joe and Bobby Sue…”  For his hugely successful LP “Fly Like an Eagle” in 1976, Steve Miller came up with this tale of two young outlaws on the run from their various crimes, kind of a modern-day Bonnie and Clyde.  It reached #11 as the first of three hits from the album that year.  Film director Quentin Tarantino has said he modeled the depraved murderers in his movie “Natural Born Killers” after the felonious couple Miller described in the song.

“Little ditty ’bout Jack and Diane…”  John Mellencamp was still Johnny Cougar when he wrote this commercial story-song about another down-and-out  couple who just didn’t have what it took to succeed in life.  Allegedly based on the Tennessee Williams play “Sweet Bird of Youth,” Mellencamp sexed it up a bit and gave it a more contemporary bent for the ’80s audience.  With a catchy guitar riff and stutter-stop rhythm, it turned out to be one of the biggest hits of 1982, and still gets a ton of exposure today.

This 11-minute opus, found on Young’s sprawling “Zuma” album, tells the story of Hernan Cortes, the Spanish warrior who fought the native Aztecs to conquer Mexico for Spain in the 16th Century.  Young had been reading historical biographies during this period of his life and was moved to write about Cortes and his exploits.  The turmoil of the many battles won and lost is symbolically represented in the fiery guitar solo that dominates the track.

Like Dylan, The Boss has written many story-songs over the years, but perhaps none as dramatic as “Incident on 57th Street,” an under-the-radar saga from his “The Wild, the Innocent and the E Street Shuffle” in late 1973.  It tells the tragic tale of Johnny and Jane, a couple who live in a New Jersey walk-up with a minimalist view of New York City, and how they try to make do in a rough-and-tumble world in which Johnny feels an undeniable need to prove his manhood in the streets.

Writing a story-song was not the exclusive domain of American composers — witness this minor classic by British rockers Bad Company.  Found on their “Straight Shooter” LP, “Shooting Star” tells the story of Johnny, the kid who is inspired by The Beatles to become a rock star, has a hit single, becomes famous, and then dies as a victim of the excesses of the rock and roll lifestyle.  Singer Paul Rodgers has said this is among his favorites in the Bad Company repertoire. 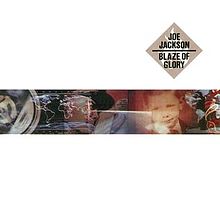 This one, from Jackson’s extraordinary but underrated 1989 song-cycle “Blaze of Glory,” tells the story of a young musician named Johnny (so many Johnnys in these songs!) who made it big, but then “the ride started to go too fast and Johnny conveniently died.” Jackson, a New Wave iconoclast who was only briefly a mainstream artist (1982’s “Steppin’ Out” in particular), has produced some incredible work in the ’80s, ’90s and beyond, even though no one has seemed to notice.

Dylan has written so many story-songs through the years that I could do an entire column just on his work.  Perhaps his most notable is the one about real-life boxer Reuben “Hurricane” Carter, who, though far from a saint, got unjustly caught up in a homicide rap, and Dylan was sufficiently outraged to write this lengthy piece that told Carter’s story.  It’s a sordid tale of institutional racism at its worst, and Dylan is almost libelously specific in his accusations about the prosecutor and his questionable testifying witnesses.