I’m going to come right out and say it.  By and large, live albums just aren’t very good.

In my conversations with friends and family during the COVID upheaval, when I ask what everyone misses the most, one of the things mentioned most often is the opportunity to attend a concert and hear live music.

Listening to great music performed right in front of you at a small club or street fair, or even at an arena or stadium, can be extraordinary.  It’s potentially thrilling to hear and see them offer their live versions, perhaps with subtle or major changes in tempo, arrangement or length, therefore making it a unique experience that you share with the others in attendance.

That’s what we miss:  Seeing and hearing live music simultaneously.

Live albums, on the other hand, attempt to recreate the concert experience without the crucial visual component.  They’re immediately handicapped by that shortcoming, which is the main reason why they are so often disappointing.

Ever since the introduction of concert DVDs, it seems to me the live album should be a dead concept.  What’s the point?  Why merely listen to a band in concert when you can listen AND watch a band in concert?

In the formative years of the ’60s and ’70s, though, virtually every band eventually released a live album, sometimes two or three or more.  It was considered something of a bellwether, an indication that the artist had become a Big Deal and was justified in putting out an in-concert LP.

So what was wrong with that?  Several things.

Too many live albums came with way too much applause and crowd craziness.  It’s so boring, and annoying, when a live track begins and/or ends with 30 seconds, 45 seconds, maybe a whole minute or more of clapping and whistling.  Some even interrupt the flow of the track with crowd noise during the song.

Many live LPs were shoddily produced and hurriedly released to capitalize on a band’s popularity.  Even the packaging was substandard.

Some live albums were fraudulent.  They actually took studio recordings and grafted on some concert applause to make the track appear live to the undiscerning listener.  Others included substantial dubbing of re-recorded guitar or vocals to cover up errors or so-so performances.

Still, they could be fun to listen to, they’re part of rock music history, and lots and lots of people bought them.  So I’ve compiled my list of a dozen live albums from the ’60s, ’70s and ’80s that bring back fond memories for me for their indelible performances and their ability to transport me to their concerts. 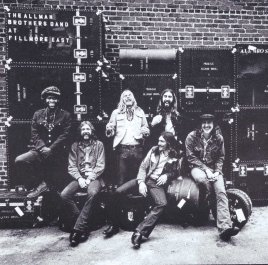 I would argue that this is rock’s finest live album.  The Allman Brothers’ first two studio albums had great original songs but the limp production gave the tracks a hollow sound.  This was a band that sounded far better in concert than in the studio, so they recorded a few nights at the Fillmore East in March 1971 and released this ferocious double album.  Original tracks like “In Memory of Elizabeth Reed” and “Whipping Post” were transformed into magnificent extended versions with Duane Allman and Dickey Betts both showing off their best licks.  Just as impressive were their renditions of such blues classics as “Stormy Monday,” “You Don’t Love Me” and “Statesboro Blues.”  A very “alive” sound with minimal crowd intrusion.

This talented band never really got past cult status, but that cult was sizable and fiercely loyal.  Most of their six studio LPs sold respectably, and they filled small halls when they toured, but widespread acceptance seemed out of reach.  Their record label sought to change that with this gorgeously produced double live album, promoted the hell out of it and had it serve a dual purpose as a greatest hits collection.  It’s a solid effort that is widely praised as one of rock’s best live LPs, although it was revealed years later that Lowell George wasn’t happy with some of his guitar parts and later overdubbed them in the studio.  Another way that live albums are sometimes not as “live” as they seem. 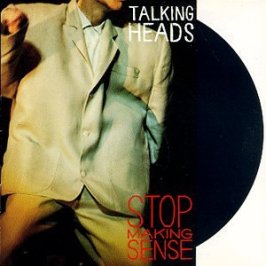 Another sonically superior concert LP is this soundtrack from the Talking Heads’ “Stop Making Sense” concert film, directed by the great Jonathan Demme.  Critics raved: “A perfectly measured snapshot of a widely loved and respected band playing at the height of their powers,” said Neil Jeffries of Empire.  “No other music movie soundtrack sounds this good.”  Leader/songwriter/singer David Byrne retained control of the recorded musical product, and it shows.   Such a fine selection of songs from their catalog:  “Psycho Killer,” “Girlfriend is Better,” “Take Me to the River,” “Burning Down the House,” “Once in a Lifetime”…  It’s one of very few live albums to be included among Rolling Stone‘s Top 500 Albums of All Time.

Unique among live albums is this entertaining release by one of L.A.’s best singer/songwriter of the Seventies.  He conceived a collection of new songs about being on the road, and recorded all of them live.  Half were recorded on stage in various U.S. venues, while others were recorded as little more than demos in various locations:  on a tour bus (“Nothing But Time”), in a hotel room (“Cocaine” and “Shaky Town”) and  a backstage rehearsal room (“Rosie”).  One of the best tracks is “The Road,” whose first half was taped in a hotel room and grafted to a second half from a stage show.  It was a novel idea that worked remarkably well; the album peaked at #3, spawned two hit singles and stayed on the charts for more than a year.

Early on, The Dead quickly realized they sounded much more like themselves in concert than in the studio, so they released an unprecedented seven double live LPs in their long career.  One of those was actually a triple album, “Europe ’72,” a fantastic sampling of music they performed during their tour of England and continental Europe in the spring of 1972.  European audiences tend to be more restrained and polite in their crowd response, which makes for a better listening experience here.  Check out their 13-minute “Truckin'” and the medley of “China Cat Sunflower/I Know You Rider” to see what I mean.  I personally think the band never sounded better, on stage or in the studio, than they do on this LP.

“The Concert in Central Park,” Simon and Garfunkel, 1982

As a huge fan of this iconic duo during their 1965-1970 heyday, I was thrilled when they announced they would reunite for a free benefit concert in Central Park in September 1981.  It ended up attracting half a million fans and became a defining moment in the rock and roll pantheon when a film of it was shown on HBO the following year.  The concurrently released double album (#3 on the charts) featured smartly produced performances of the duo’s unparalleled vocal blend, with five songs from Simon’s solo works and one new Garfunkel tune (“A Heart in New York”), but the rest was a fabulous look back at the songs that tantalized a generation, from “The Boxer,” and “Homeward Bound” to “America” and “Mrs. Robinson.”

While Cream came up with some pretty great studio tracks on the four LPs they made in their two years together, it is the recordings of their live performances that really define what Cream was all about.  Eric Clapton, Jack Bruce and Ginger Baker were each virtuosos on their respective instruments, and when they embarked on extended jams of some of their songs, look out.  If Cream had put all their best live tracks on one album, it would’ve been a slam dunk, but instead they’re spread out among several LPs.  Still, I’m going to include the live Disc 2 of “Wheels of Fire” on my list because of the phenomenal production which captured the improvisational brilliance of “Spoonful” and “Crossroads.”

This one’s a big, glorious mess of a live album — six vinyl sides of performances, both sharp and ragged, by an all-star cast of bands from the summer of ’69 — Joe Cocker, The Who, Ten Years After, Sly and The Family Stone, Santana, Country Joe and The Fish, Crosby, Stills and Nash, and Jimi Hendrix.  There’s plenty of crowd noise, dialog, stage announcements, occasional feedback, flat notes and whatnot, but that’s part of what made the triple live LP and the film into award-winning documentaries of a watershed event in rock history, warts and all.  The sound quality of the album is, frankly, hit or miss; some bands sound muffled or distant, while Santana, a new band to many in attendance, comes across better than most. 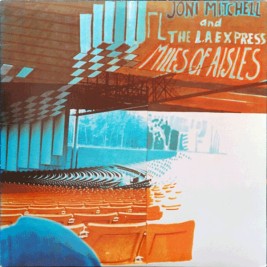 This wonderful record captured one of rock’s most wondrous artists at her commercial peak just as she was ending one period and embarking on another.  Joni had been a folk singer whose own songwriting matured by leaps and bounds throughout her first five albums, and with “Court and Spark,” she began to use a full band (the jazz-infused L.A. Express) in the studio and on tour.  These live performances offered a cross section of old Joni, basically just her voice with guitar or piano, and new Joni, with the band, showing hints of the full-blown jazz material she’d be doing within a couple of years.  Almost all tracks were recorded at Universal Amphitheatre, and the sound is pretty damn good. 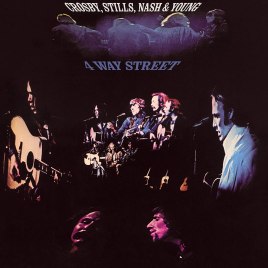 These hippie gods were so talented, and yet so maddeningly egotistical, that they were doomed to break up less than a year after they got together.  There simply wasn’t enough space on an album for all the great songs these four musicians were cranking out in this incredibly fertile period, but they put one tour together, and recorded most dates.   A year after the breakup, they selected 16 performances and assembled “Four-Way Street,” where the crowd noise is a bit loud for my taste, and the vocals aren’t as pristine as we had come to expect from their studio tracks.  But the album made it to #1 and makes my list because there are wonderful acoustic tunes new to the audience at the time (Crosby’s “The Lee Shore,” “Nash’s “Right Between the Eyes” and Young’s “Don’t Let It Bring You Down”). 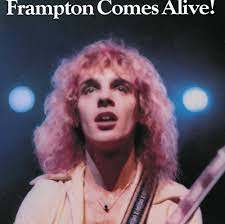 If there’s a live album you can blame for the glut of double live LPs that cluttered the record stores in the late ’70s, it would be this one.  Frampton had intended “Frampton Comes Alive!” to be a single LP, but A&M Records actually encouraged him to make it a double, and it ended up soaring to #1 in the US, where it sat for 10 weeks in 1976 and became the biggest-selling live album ever.  There’s way too much intrusive crowd noise here (it’s particularly annoying during the talk-box guitar solo on “Do You Feel Like We Do”), but the production is crisp and pure throughout, and Frampton and his band are in fine form on “Something’s Happening,” “Lines on My Face” and the hit single “Baby I Love Your Way.” 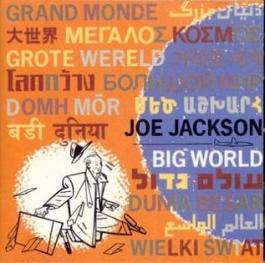 This final selection offers another unique take on how a live album could be recorded.  In this case, Jackson wrote 15 great new songs, thoroughly rehearsed them with his touring band, and then booked a concert hall — Roundabout Theatre in New York City — for three nights.  But here’s the kicker:  He requested that the audience refrain from any response until each song’s recording had been completed.  The intent was to capture the intensity and spontaneity of a live performance, but without the distraction of noise from the crowd.  “There was plenty of applause,” said Jackson, “but they were asked to hold it until they were sure a song was finished.  They understood this, and it all went surprisingly smoothly.”