Several weeks ago, I recounted my very favorite rock concert experience — Bruce Springsteen at the Allen Theater in Cleveland in August 1975.

There was so much going in the popular music scene in 1969 that it’s almost overwhelming to contemplate.  The high-water mark of Woodstock and the nightmare of Altamont; the Beatles’ swan song, “Abbey Road”; Motown acts the Temptations and Supremes dabbling in “psychedelic soul”; the debuts of Crosby, Stills & Nash and Joni Mitchell; the one-off Clapton/Winwood project, Blind Faith; Bob Dylan’s countryish “Nashville Skyline”;  the horns-heavy bands Chicago Transit Authority and Blood, Sweat and Tears; “Tommy” and “Let It Bleed” from the Who and the Stones; Creedence Clearwater Revival’s swamp rock; “Easy Rider” and the beginning of rock music in film; and, regrettably, bubblegum pop like The Archie’s “Sugar Sugar,” which, believe it or not, 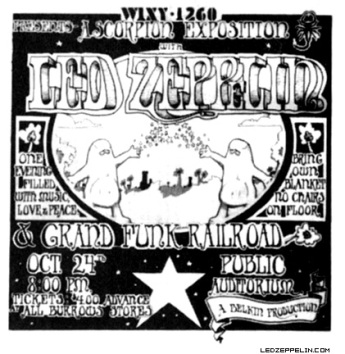 But perhaps the biggest story was the arrival of the British band that set the stage for the 1970s, and heavy metal, and lengthy solos, and arena-sized concerts, and larger-than-life tours, and private jets and non-stop #1 albums, and the seismic shift from buying singles to buying albums.  I’m speaking, of course, of Led Zeppelin.

In early 1969, at age 13, I went to my local record store, where, amongst the usual fare of popular artists and movie soundtracks, they had a bin labeled “Progressive Rock,” a mixed bag of LPs by strange new bands that hadn’t yet earned their own bin.  One album cover in particular grabbed my attention, with its graphically treated B&W photo depicting the infamous Hindenburg airship explosion.   What’s this? I thought.  I’m not sure why I felt intrigued enough to buy Led Zeppelin’s astonishing debut, but I did, along with the albums I had gone there to buy, Cream’s “Wheels of Fire” and Jimi Hendrix’s “Are You Experienced.”