Periodically, I plan to use this space to pay homage to artists who I believe are worthy of focused attention — artists with an extraordinary, consistently excellent body of work and a compelling story to tell.  In this essay, I salute one of the songwriting giants of the last half-century — Paul Simon. 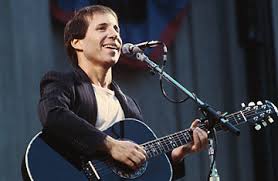 I’d say there are less than a dozen true geniuses of song craftsmanship in popular music, and among that rarified club, Paul Simon is my personal hero, because essentially, he’s the reason I wanted to learn how to play acoustic guitar — so I could sing his songs around the bonfires and on back porches with friends and family.

From the delicate melodies and wistful lyrics of his early days with Art Garfunkel through his use of an ever-broadening palette of musical styles and rhythms and vocabulary-rich lyrics as a solo artist, Simon continues to astonish and impress critics and the public alike as he marks his 50th year as a composer, as well as guitarist, singer and recording artist. Perhaps the best indication of his nearly universal acclaim in the songwriting community was his selection as the very first recipient of the Library of Congress Gershwin Prize for Popular Song, established in 2007 to honor the titans of 20th (and 21st) Century popular songwriting.

He has not been a prolific composer. While contemporaries like Bob Dylan and Van Morrison have each released upwards of 40 albums of new material since their debuts in the mid-‘60s, Simon has only 16. He has tended to labor a long time between records, struggling with his perfectionism and occasional writer’s block issues. Consequently, his work has, in my view, been more consistently excellent than his peers who, while capable of monumentally strong songs and albums, have numerous duds in their catalogs.

Born and raised in Queens in the late ‘40s and ‘50s, Simon claims to be essentially a rock ‘n roll kid, cutting his teeth on ‘50s rhythm and blues, doo-wop, Buddy Holly and Woody Guthrie. With his middle school pal Garfunkel, he worked on tight harmonies in The Everly Brothers mold and even won a modest recording contract while still in high school, and the duo had a minor hit as Tom and Jerry called “Hey Schoolgirl” in 1957. That was essentially a “one-hit wonder,” however, and the two eventually parted ways to pursue their own paths in college and elsewhere.

By the time he was 22, he was starting to emulate Dylan’s penchant for writing meaningful lyrics that expressed much more emotion and weight than the standard pop songs of the day. He and Garfunkel regrouped in 1964, now under the auspices of Columbia Records, and released their debut album, a mix of traditional folk songs and promising Simon originals. The duo’s perfectly blended voices were their key attribute, and critics noted the depth and sophistication in songs like Simon’s “The Sound of Silence,” but the album stiffed.  Once “folk rock” became a thing in 1965, when lyrically relevant material was recorded by bands playing electric guitars and rock arrangements, a producer at Columbia took the quiet recording of “The Sound of Silence,” grafted on some electric guitar, bass and drums, and voila! Simon and Garfunkel went to #1.

By 1967, they already had two strong albums and a half-dozen successful singles, all written by Simon: “Homeward Bound,” “I Am a Rock,” “Scarborough Fair,” “April Come She Will,” “For Emily, Whenever I May Find Her,” “Hazy Shade of Winter,” “Fakin’ It.” These and others clearly proved he was a composer worth taking seriously.  And yet, he had only barely scratched the surface of his songwriting abilities. In 1968 and 1969, masterpieces like “America” and “The Boxer” demonstrated an entirely new level of musical maturity and lyrical storytelling. The song cycle on the first side of the “Bookends” album (including “America” and “Old Friends”) is an incredible achievement, with songs that depict the human condition from childhood to old age, and “The Boxer” includes a verse (deleted at first, but restored in concert ever since) that is unusually prophetic for a man still in his 20s: “Now the years are rolling by me, they are rockin’ evenly, I am older than I once was and younger than I’ll be, that’s not unusual, no it isn’t strange, after changes upon changes, we are more or less the same…”

He and Garfunkel truly became household names when Simon’s music was used as an integral element of the seminal coming-of-age film “The Graduate,” including the #1 hit “Mrs. Robinson.”  But it was the game-changing, Grammy-winning “Bridge Over Troubled Water,” acclaimed worldwide as a picture-perfect example of gospel songwriting, that elevated Simon to membership among the elite composers of his time.

I was among the many diehard S&G fans who protested loudly when the duo chose to part company following the “Bridge” concert tour in 1970. Just as The Beatles dissolved amid the tension of being together 24/7, Simon and Garfunkel had also grown apart, eager to pursue separate passions. Simon in particular felt constrained by what he felt was a limited format. “I was fascinated with the idea of exploring other musical genres,” he said. “I was eager to write music that wouldn’t have worked in the S&G context.” Savvy listeners saw this coming in the final S&G singles – the use of Peruvian instruments and rhythms on “El Condor Pasa” and the bold, raw percussion that dominated “Cecilia.”

Simon’s first two solo albums offered a veritable cornucopia of rhythms and textures far removed from the typical S&G songs: the reggae influences in “Mother and Child Reunion” and “Was a Sunny Day,” the Hispanic street beat of “Me and Julio Down By the Schoolyard,” the doo-wop/gospel hybrid of “Loves Me Like a Rock,” the blues of “One Man’s Ceiling is Another Man’s Floor,” the jazz of “Tenderness.” And the lyrics continued to provide uncommon insight. Consider how beautifully he captured the angst and malaise of the mid-’70s in “American Tune”: “Well, we come on a ship they call the Mayflower, we come on a ship that sailed the moon, we come in the age’s most uncertain hour and sing an American tune, oh but it’s all right, it’s all right, we can’t be forever blessed, still tomorrow’s gonna be another working day, and I’m trying to get some rest…”

Simon’s Grammy awards continued with 1975’s “Still Crazy After All These Years,” which chronicled the dissolution of his first marriage with extraordinary melodies and lyrics that were simultaneously heartbreaking and whimsical. In the album track “You’re Kind,” he offered this:  “So goodbye, goodbye, I’m gonna leave you now and here’s the reason why, I like to sleep with the window open, and you keep the window closed, so goodbye, goodbye, goodbye…”

This is a crucial point about Simon’s work — the balance between poignancy and whimsy.  Many critics pigeonholed him (at least at first) as a man obsessed with loneliness and depression, but his catalog also includes dozens of songs full of lighthearted, effervescent words and rhythms:  “Feelin’ Groovy,” “Baby Driver,” “Duncan,” “Kodachrome,” “50 Ways to Leave Your Lover,” “Punky’s Dilemma,” “Late in the Evening,” “You Can Call Me Al,” “Proof,” “So Beautiful or So What.”  Far from a buzzkill, Simon has composed many tunes that overflow with joy and delight.

He fell out of favor for a period in the early ’80s with two projects (the 1980 film and soundtrack “One Trick Pony” and the somewhat flat “Hearts and Bones” in 1984) that, while well worthy of attention, seemed not quite up to snuff.  But Simon’s restlessness sent him searching for new inspiration, and he found it in the compelling rhythms coming out of South Africa.  He found himself embroiled in controversy at the time by dancing around the boycott of the country’s repressive apartheid government, but he firmly resolved to expose the world to the insistent beat of the African artists he was working with.  The result, 1986’s phenomenal “Graceland,” won widespread praise, chart success, and still more Grammys.  “Diamonds on the Soles of Her Shoes,” “The Boy in the Bubble,” “Under African Skies” and the indelible title track firmly reestablished Simon as one of the crown jewels among American songwriting musicians.

“Rhythm of the Saints” (1990) used West African and Brazilian instruments and rhythms to build on “Graceland’s” momentum and produce a thoughtful, nuanced record that, while less commercially successful, maintained Simon’s stature with irresistible tracks like “Born at the Right Time,” “The Obvious Child” and “The Coast.”  From there, he made the bold move to immerse himself for nearly five years in the dark story of a Puerto Rican teenager known as The Capeman who was convicted of two 1959 murders, and he wrote an entire song cycle (interesting but repetitive) and spearheaded an ambitious Broadway play about it all.  Sadly for him, it debuted to disastrous reviews in 1997 and closed within weeks, and left him bruised and unsure of himself.

Stung by this experience, he retreated from view for a while, but re-emerged in 2000 with “You’re the One,” a triumphant return to form with classic Simon songs that offered a vibrant mix of pathos, intricate melodies, understated elegance and wry observations:   “Love, we crave it so badly, makes you want to laugh out loud when you receive it, and gobble it like candy…”  The industry and the buying (downloading) public had moved on to other things, for the most part, but the LP still managed to break into the Top 20.

In the fifteen years since then, Simon has managed only two new releases — the experimental “Surprise” (2006), on which he partnered with cutting edge producer Brian Eno, and the delightfully spiritual Top Five album “So Beautiful or So What” (2012).  But he also relented to nostalgic requests from fans and critics who clamored for a reunion with Garfunkel for a huge world tour and accompanying CD/DVD, “Old Friends,” in 2004, which won rapturous notices in every city and country in which they appeared.

He may be in his 70s now, but the passing years have only made his lyrics wiser and more fascinating.  For example, his musings about life after death in “The Afterlife” provide a quintessentially Simon viewpoint about what we might all expect when we die:  “I thought it was odd there was no sign of God just to usher me in, then a voice up above sugar-coated with love, said ‘Let us begin:  You got to fill out a form first, and then you wait in the line…'”

Who knows how many more years, and songs, Simon has in him before he finds out if “The Afterlife” is fact or fiction.  But the legacy he will leave behind in his life’s work rivals anyone who has ever pursued the compositional muse.  To those who are familiar with only his most familiar hits, I urge you to delve deeper into the five decades of recorded songs written by this superbly gifted man.