Periodically, I plan to use this space to pay homage to artists who I believe are worthy of focused attention — artists with an extraordinary, consistently excellent body of work and a compelling story to tell.  In this essay, I examine the on-again, off-again assemblage of singer-songwriter talent known worldwide as Crosby, Stills and Nash (and Young).

In 1968, after four years of dizzying chart success with The Hollies in his native England 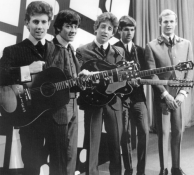 and in the US, Graham Nash was unhappy.  He was writing amazing new songs, stretching his horizons, trying new things, but his bandmates didn’t like it.  It didn’t fit their image, they said.  Why upset the apple cart, they said.  We’re huge just the way we are.  But Nash felt he was destined for more.

Meanwhile, in Southern California, David Crosby had become estranged from his bandmates in the seminal folk rock group The Byrds, and they basically kicked him out.  And Stephen Stills, the wunderkind guitar wizard, was

looking for something new after the implosion of his group, the great Buffalo Springfield.  He and Crosby hooked up and started thinking about doing something together.

Enter Cass Elliott, the mother figure from the Mamas and Papas who was something of a mentor and comforting persona in the Laurel Canyon community up in the hills from Hollywood in LA.  She had met Nash and knew of his unhappiness in The Hollies, and thought the time was right for him to get to know her friends Crosby and Stills.  The Hollies were in town on tour, and Cass picked him up at his hotel in downtown LA and took him to Joni Mitchell’s house in Laurel Canyon.  Stills and Crosby were there, finishing dinner, and then broke out their guitars to try out some new son

Stills started “You Don’t Have to Cry,” with Crosby providing a perfect second vocal part beneath Stills’ lead.  Nash was blown away by the melody and the two-part harmony.  He asked them to sing it again.  Bemused by this, they sang it a second time, and Nash listened intently.  When they were done, he said, “Okay, humor me here.  Please sing it one more time.”

They shrugged and did as Nash asked, and when they reached the first verse, “In the morning, when you rise…” Nash joined in with a third-part harmony above the other two, and the room froze.  They continued the song, with Nash chiming in above them.  By the time they reached the chorus, “…you don’t have to cry-y-y-y…” they all fell down laughing.  “Holy shit, what was THAT?!”  they said.

What to call themselves?  They’d been Hollies, and Byrds, and Buffalo Springfield.  They liked the egalitarian idea of using their own names, almost like a law firm, so no one could be replaced by a su

bstitute.  They went back and forth as to the order of names, and ultimately “Crosby Stills and Nash” seemed to roll off the tongue just right.

They found a condemned house off Santa Monica Boulevard and took a series of photos by famed photographer Henry Diltz.  The next day, they realized they had been sitting in the wrong order — Nash, Stills, Crosby — so they went back to reshoot.  But the house had been torn down.  So they went with the photo we all know and love, and the whole world soon became Crosby Stills & Nash fans.

And not just because of the cover art.  Everyone’s ears stood up on end when they first heard the compelling opening track, “Suite:  Judy Blue Eyes,” a seven-m

He offered an opinion.  “What you need is Neil Young.”

Stills immediately objected.  He had dealt with Young’s fiery temperament during their Buffalo Springfield days, and as much as he admired Young’s songwriting, singing and guitar playing, he was very wary of his volatile mood swings and unreliability.  Crosby, always the maverick willing to try anything, thought it was a cool idea.  Nash, the British gentleman who had given up so much to relocate to LA for this trio, had never met Young and insisted on a one-on-one meet.  Young proceeded to charm the pants off Nash with his humor and unusual manner, and the trio became a foursome, just in time to head off to upstate New York

and become the surprise sensation at the Woodstock Music and Arts Fair.

Sadly, the threesome-now-foursome suffered from the malady that afflicts so many “supergroups” — ego.  Four singular talents, four great songwriters, four veterans of the cutthroat music business were all vying for space on stage, on albums, on the public forum that had opened up for them, thanks to the wondrous music on “Crosby, Stills and Nash” and the incredible CSNY follow-up, “Deja Vu,” released in March 1970, with the charming Nash tunes “Teach Your Children” and “Our House” and the cover of Joni Mitchell’s anthem “Woodstock.”

The problem was, there simply wasn’t enough space to include everything they had to share.  Young had already released two solo albums with iconic songs like “Cinnamon Girl,” “Cowgirl in the Sand” and “Down By the River.”  He wasn’t about to settle for only two tracks on a CSNY effort.  Crosby, Stills and Nash, too, each had more songs in the pipeline than there was room for on a group effort.  They had always said they might splinter off and do solo projects, or twosomes, and then come back together after a while.

And that’s exactly what happened.  After a tour in Spring 1970, marked by the release of the incendiary Young track “Ohio” in response to the shootings at Kent State University, CSNY went their separate ways…for a while.

Stills’ solo debut had a Top Ten hit, “Love the One You’re With,” and tracks featuring guest appearances by Jimi Hendrix (“Old Times

Good Times”) and Eric Clapton (“Go Back Home”).  Nash’s “Songs For Beginners” offered a treasure trove of beautiful songs like “I Used to Be a King,” “Military Madness,” “Sleep Song” and the politically charged single “Chicago.”  Crosby’s extraordinary “If I Could Only Remember My Name” had no commercial hits, but it

charted well, with his brand of unusual chord changes and ethereal harmonies.  Young, meanwhile, had the biggest

So the biggest sensation of 1969-70 worked as solo artists by 1971.  Atlantic Records released the double live LP “Four Way Street” that year, which included some amazing performances (“Right Between the Eyes,” “The Lee Shore,” “Don’t Let It Bring You Down”),

but also some truly ragged vocals on “Carry On” and “Southern Man.”  But it went to #1 and kept the band in the public eye despite the fact they didn’t care to be in each other’s company.

Nash and Crosby were the first to try again to work together, with a Nash/Crosby combined effort in 1972 and the minor hit “Immigration Man.”  By 1973, the foursome decided to give it another go, meeting at Young’s Marin County ranch to attempt to record a new album.  But egos continued to muddy the waters — Stills had his well-regarded band Manassas, Young was jazzed about his partnership with Crazy Horse — so they again parted ways. 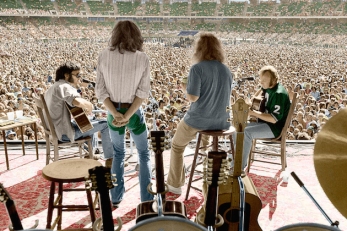 By August 1974, the foursome was convinced of the money to be made if they would reunite for a massive stadium tour, with multiple acts warming up the crowd before CSNY took the stage to offer three hours of classics and new songs.  I saw them in Cleveland that year, with Jesse Colin Young, Santana and The Band.  I still get chills from that show.  You can now buy an amazing multi-CD package called “1974,” released last year, that features all the familiar tunes along with many previously unreleased songs of that period — “Fieldworker,” “Don’t Be Denied,” “Hawaiian Sunrise,” Long May You Run,” “My Angel,” Carry Me,” “Revolution Blues.”

And then, in 1977, the original trio got back together for “CSN,” a glorious collection of fabulous songs by Crosby (“Shadow Captain,” “In My Dreams”), Stills (“Dark Star,” “Fair Game,” “See the Changes,” “I Give You Give Blind”) and Nash (“Just a Song Before I Go,”

“Cathedral”).  The album peaked at #2 and sold five million copies.

They toured incessantly over the next several years, cementing their status as one of the best supergroups of all time, even in the era of disco and punk.  But it was a fragile relationship between these three.  Stills had always been self-absorbed, sure of his instrumental talents even as he abused cocaine and alcohol.  Crosby in particular was a California free spirit, prone to excessive drug abuse, freebasing coke and doing whatever he pleased, all caution to the wind.  Nash enjoyed recreational drugs as well but maintained a healthy center, keeping his equilibrium amidst his cohorts’ unravelling.

Through the ’80s and ’90s and beyond, these titans of rock only occasionally surfaced.  CSN released “Daylight Again” in 1982, with the hit singles “Wasted on the Way” and “Southern Cross,” but Crosby, deep into a freebase addiction, was barely present.  He hit a harrowing bottom with his arrest and imprisonment in Texas in 1985, but emerged victorious, and Young made good on his promise to reunite with CSN if Crosby shook his addiction.  The 1988 album “American Dream” fell far short of its lofty expectations, with only two or three decent tracks  (“Got It Made,” “Shadowland,” “Compass”). 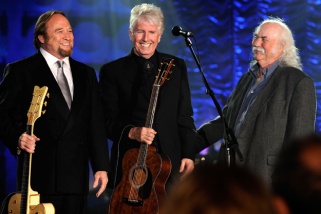 The 1990 CSN debacle “Live It Up” is best left alone.  Most of the songs were written by others, and not at all noteworthy.  The 1994 album “After the Storm” was also a disappointment, and left CSN fans wondering if the trio’s songwriting strengths were behind them, even if there were a few worthy tracks (Crosby’s “Camera,” Stills’ “Panama” and Nash’s “After the Storm”).

In 1999, the foursome convened one more time, for the album “Looking Forward” (which offered a few good songs but, again, far too much filler), and a fabulously successful tour.  They showed once again that they were not really a group at all, but four separate songwriters who appreciated each others’ company every so often, and thrilled the public by getting together on the same stage to share their superlative older songs with us.

There are books you should read that share inside stories about these four very different characters, how they merged, and why they couldn’t seem to stay together for more than a few months at a time.  Graham Nash’s recent “Wild Tales” is probably the best of these, mostly because he’s by far the most articulate and balanced of the four.  But Crosby’s “Long Time Gone” provides keen insight into his troubling tale of drug abuse, imprisonment, and rehabilitation, with input from his many musical colleagues.

As far as recent CSNY material is concerned, I recommend the 2013 CD “Croz,” a remarkably strong collection of new material, bolstered by Crosby’s son James Raymond on keyboards and production. Young, meanwhile, is by far the most prolific of this group, continuing to pump out an album every year or two, but much of his output is not my cup of tea.  “Prairie Wind,” from 2006, is my favorite from his catalog of the last 20 years…