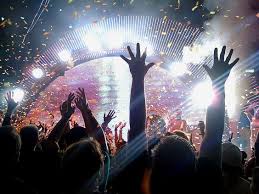 Fans of rock music tend to start at an early age — listening, buying, downloading, sharing — but they don’t truly join the rock and roll community until they attend their first rock concert.

It can be, and should be, and often is, exhilarating, draining, even life-changing.  But it can also be frustrating and ultimately unsatisfying, for a wide variety of reasons.

If you asked a rock concertgoer in, say, 1970 what he disliked most about the experience, he would most likely complain about the sound system, or the venue’s miserable acoustics.  Today, those two problems have largely been eliminated, thanks to better technology and sound engineering.  But another list of pet peeves (some old, some new) have reared their ugly heads to mar the concertgoing experience.

An informal poll of my many concertgoing friends and acquaintances, from age 16 to age 65, about the pet peeves that drive them crazy about the concerts they attend reveals interesting results.  Some things bother everybody, regardless of age; other things are not a problem for younger fans but irritate the over-50 demographic, and vice versa.

Let’s take a closer look at the top five reasons why going to a rock and roll show is not as fabulous as it could be.

By far, this is the biggest gripe.  A teenager in 2016 who wants to see a sensation like Taylor Swift will likely be looking at tickets priced at $250 apiece or more.  Even the boomers who want to see The Eagles will have to pay about the same.  Is that right?  Is that fair?  In what world is it right that a fan should have to fork over that kind of money for one evening’s entertainment?  On Broadway, maybe, but in the heartland, it’s insane.

Well, artists make virtually NO money anymore on their recorded material, thanks to free or virtually free downloading of songs/albums.  They must make all their money from concert tickets and/or merchandise (t-shirts, etc.), and therefore they have to jack up the concert ticket prices to make up the difference.

Part of the problem is the way we buy tickets nowadays.  In the ’70s, you went to a box office or a ticket-selling location, you bought your ticket, and that was that.  But beginning in the mid-’80s, the evil monster known as Ticketmaster showed up, claiming to offer “convenience” while adding on various fees that significantly increased your bottom-line cost.  Now, in 2016, if you go online to buy a ticket (because that’s the way it’s typically done now), they extract a ridiculous $10 fee per ticket, plus this, plus that, plus this, plus that, and suddenly your $100 ticket actually costs $145.  Yesterday, I bought two tickets here in LA for a concert in Pasadena in February.  They were $45 each.  Okay, $90.  Not bad.  But by the time I was done, my credit card was billed not for $90, but for $145.  WTF??  Did I buy three tickets or two?  If this isn’t customer rape, I don’t know what is.

You really can’t complain about traffic.  It is what it is, depending on what city you live in.  Sporting events, rock concerts, the circus, whatever, if there’s a crowd, you have to deal with traffic.  My suggestion:  Leave home earlier, research the best routes to get to the venue, find a parking area further away and walk a half-mile.  But still, why must we deal with parking prices that go from $5 in a given downtown lot to $35 just because there’s an event nearby?  Seems like gouging to me.  This is especially true when you drive to some remote venue where there is no other parking except what they provide, and they screw you royally.  (Cleveland friends:  Remember the middle-of-nowhere Richfield Coliseum?)  In my view, it’s all about greed, once again…

Where do we begin?

Those who attend rock concerts cover the gamut, from teenagers who are psyched to see the hot new band take the stage, to older folks who just want to see their favorite act crank it up in person one more time. Sometimes the two can co-exist peacefully, but too often, they clash, and the results aren’t pretty.

Most rock fans remember (or, more accurately, don’t remember) attending a show where they over-imbibed and largely missed the concert they’d paid to see.  They might have screamed “I love you!!” or yelled out song requests at inappropriate moments.   They might have incessantly held up their cellphones to take photos or videos, thereby blocking the views of fans behind them.  They might have loudly carried on an unrelated conversation with their companion during a quiet moment in the show.  They might have chosen to sing along to whatever song was being performed, subjecting you to horrendous karaoke-type vocals at exactly the wrong time.  They might have even passed out and thrown up on your shoes.

Some younger fans insist that rock shows are not meant to be experienced sitting down.  (Indeed, some shows don’t even offer chairs; fans on the floor near the front are expected to stand for hours before and during the gig.)  They are so enthusiastic that they feel compelled to stand and dance, even if they’re blocking the view of those behind them, and they chide those older fans who stayed seated.  “It’s a friggin’ rock and roll show, not an orchestra concert,” they say.

Regardless, it’s unacceptable to be subjected to selfish behavior by others when you’ve forked over considerable dollars to see a band in the flesh and have to endure that kind of thing.

I love hearing unknown artists warming up for the headliner, but many concertgoers don’t share my enthusiasm.  They treat them with disdain and rudeness (I heard one girl scream out “Who are you??” during one warm-up set).  I don’t understand why people ignore them, chatting and moving around and drinking their beers.  It’s a shame, for the up-and-coming band you could see today might very well be a superstar two or three years later.  I went to see Led Zeppelin in 1969 at age 14, and I was blown away by the warmup act, a little-known Michigan band called Grand Funk Railroad.  A year later, they were one of the biggest draws of all.  Considering what you’re paying for tickets, why not give the opening act a chance?  You might really enjoy them.

But also, promoters should not publicize a starting time of 7:30 (or whatever) when the concert doesn’t begin until 30 or 40 minutes later, and the headliner doesn’t come on until after a ridiculously long intermission.  Don’t keep your fans waiting.  They tend to get restless, boisterous, and drunk.  And older fans will stop coming in the future.  Many of my friends haven’t attended a rock show in years, even though they’d like to.

Some artists are incredibly, exasperatingly self-indulgent.  They give you a decent show of two hours or more, but they don’t play any of the songs you really wanted to hear.  Bob Dylan and Van Morrison, for example, have been notorious about this kind of thing.

Or they play the songs you want, but they call it a night after only 80 or 90 minutes, and you feel shortchanged. (Kenny Loggins and Chuck Berry come to mind.)   Or even worse, they’re drunk and clearly are not giving you the performance you deserve.

Worse yet, there’s not a damn thing you can do about it, except maybe badmouth them to your friends and urge them not to attend their show the next time they come to town.

Your chances of truly enjoying a rock show will be greater if you arrive with the right attitude, knowing your patience and tolerance will likely be tested.  Let’s face it, these and other pet peeves aren’t going to go away, so grin and bear it, go with the flow, and groove to the music!