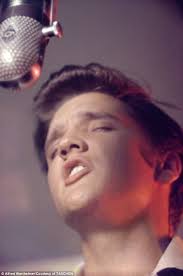 When you mention Elvis Presley‘s name, so many things may come to mind.  The extraordinary voice.  The iconic songs.   The hips and the curled lip.  The “Yes Ma’am” demeanor.  The lame-o movies.  The comeback TV special.  The Vegas years.  The downward drug spiral.  The premature death.

For me and those of my age, born in 1955, Elvis was before my time, so I didn’t learn to appreciate him until many years later.  As a passionate student of rock and roll, I have since read a great deal about Elvis and immersed myself in his music, particularly the amazing, groundbreaking, trailblazing singles and albums he recorded in his first four years in the business (1954-1957).

The sessions he did at Sam Phillips’ Sun Records in Memphis in 1954-55 are simply phenomenal, among the very best in rock music history.  Similarly, the body of work he recorded under his RCA Records contract in 1956 and 1957 still sends chills up the spine.

Once you’ve heard and listened to what he was capable of doing, it’s absolutely heartbreaking to observe what happened to him over the next 20 years until his death in 1977.

Taken as a whole, Elvis’s career can be summed up in four words:  Gross mismanagement.  Failed potential.

And the blame for that falls primarily on the shoulders of one man:  His manager, “Colonel” Tom Parker.  If you were to compile a ranking of rock and roll’s most notorious villains, Parker’s name would surely be right at the top.