I’m an Ohio kid, born and raised in Cleveland, which lays claim to the title of “rock and roll capital,” and is home to the Rock and Roll Hall of Fame and Museum.

Thanks to great radio stations there — WIXY-1260 on AM in the ’60s and WMMS 100.7 on FM in the ’70s — I was exposed to the very best that rock and roll had to offer, from Motown to the British Invasion, from country rock to progressive rock, from The Stones to The Boss.  I absorbed it all, and I loved the power that rock music had to take me to faraway places, real or fictional, better than anything.

One of those real places was California.  The West Coast.  The Left Coast.  I live here now — in Santa Monica, a mile from the beach — and in many ways, it’s been a dream come true.  Decades ago, this Ohio boy was thoroughly mesmerized by images of this magical place, immortalized in hundreds of songs about California, many from my (our) childhood and young adulthood.

In the early ’60s, thanks to The Beach Boys, Jan & Dean and others, I could be transported to the beaches of Southern California, with its surfers, girls in bikinis, hot rods and spectacular scenery.  “If everybody had an ocean across the USA, then everybody’d be surfin’ like Californi-a…”

In the ’70s, Los Angeles usurped New York as the epicenter of the rock music scene.  Many dozens of artists descended on established and start-up recording studios alike to produce just about every genre of music imaginable:  the confessional acoustic rock of Crosby, Stills and Nash and Joni Mitchell;  the brazen hard rock of Van Halen;  the inventive R&B/funk merger of Earth, Wind & Fire;  the Tex-Mex rock of Los Lobos;  the shiny pop of Toto and Mr. Mister;  the heavy metal of Metallica, Motley Crue and Quiet Riot;  the immaculately sardonic jazz rock of Steely Dan; the psychedelic folk pop of Love;  the country rock of The Eagles; the eccentric progressive rock of Frank Zappa and the Mothers of Invention;  the squeaky-clean pop of Bread and The Carpenters.

Not all of these artists wrote songs with lyrics specifically about California, its cities and its culture.  But many did, simply because the imagery, for better or worse, was so rich.  Carefree lifestyles.  Freedom.  Decadence.  Progressivism.  Meditation and yoga.  Recreational drug use.  Trailblazing trends.  Excessive behavior.  Chasing dreams.  Beaches, mountains, deserts, canyons, valleys.  It seemed that California had it all.

Brian Wilson’s iconic tribute to the pretty ladies who populate the beaches where he grew up may very well be the quintessential rock song about California.  He rather courageously claimed that West Coast girls are superior to those from other parts of the country, and nobody dared argue with him “I been all around this great big world, and I seen all kinds of girls, yeah but I couldn’t wait to get back in the states, back to the cutest girls in the world, I wish they all could be California girls…”  Wilson has said he is particularly proud of the gorgeous 30-second intro, with its subtle use of horns and layered production techniques.

This veteran jam band served as ambassadors of the San Francisco counterculture for four decades or more, offering a tasty repertoire of feel-good songs like this ode to California from their “Terrapin Station” LP:  “Rainbows down that highway where ocean breezes blow, my time coming, voices saying they tell me where to go, California, a prophet on the burning shore, California, I’ll be knocking on the golden door…”

Burt Bacharach and Hal David conjured up some wonderfully carefree songs about life and love in California in the ’60s, and Dionne Warwick, Jackie DeShannon, The Carpenters, Dusty Springfield and others made them into international hits.  Warwick’s Grammy-winning recording of “Do You Know the Way to San Jose” tells the story of a hopeful who heads to L.A. with dreams of stardom but soon returns to her home town:  “All the stars that never were are parking cars and pumping gas, you can really breathe in San Jose, I was born and raised in San Jose, I’m going back to find some peace of mind in San Jose…”

Newman is famous for satirical lyrics, and there’s a slight edge to his celebration of the City of Angels, hinting at the homeless and the superficiality there, but mostly, it’s party time all the time:  “Crank up the Beach Boys, baby, don’t let the music stop… Everybody’s very happy ’cause the sun is shining all the time, looks like another perfect day, I love L.A…”

, focusing instead on funk and R&B.  Their 1973 album “Wild and Peaceful” spawned two huge successes on the singles chart, “Jungle Boogie” and “Hollywood Swinging.”  The latter, written collectively by the band, celebrated the vibrancy and excitement of Hollywood:  “Here I am in this Hollywood city, the city of the stars, movies, women and cars, well I guess, I guess I have to stay, hey hey hey, whatcha got to say, yeah that’s what they’re doin’, Hollywood, Hollywood swinging…”

One of singer Jim Morrison’s final masterpieces is this title song from his last album with the group.  It has a relentless beat, driven by bass and keyboards, and the lyrics take the listener on an exhilarating car ride (“driving down your freeway, midnight alleys roam”) with an enigmatic L.A. woman (“the lucky little lady in the City of Light, or just another lost angel in the City of Night”).  It’s also the song that gave birth to Morrison’s anagram-based nickname, Mr. Mojo Risin’.

Written by John Phillips in the Spring of 1967 expressly to promote the Monterey Pop Music Festival, he gave the optimistic song to his friend McKenzie, who had a #4 hit with it (#1 in England).  It captured the public’s imagination about what was going on in the hippie culture there in that Summer of Love, painting an idealistic picture that downplayed the eventual fallout of drug overdoses and lost lives:  “For those who come to San Francisco, summertime will be a love-in there, in the streets of San Francisco, gentle people with flowers in their hair…”

British hard rockers Jimmy Page and Robert Plant were quite vocal about their love of and respect for the music of Joni Mitchell.  This acoustic track from their popular “Untitled/IV” LP is a nod to her and the free-spirited California lifestyle they so admired:  “Someone told me there’s a girl out there with love in her eyes and flowers in her hair…they say she plays guitar and cries and sings…”

The 1971 album “Blue” — the first third of Joni’s confessional manifesto trilogy (with 1972’s “For the Roses” and 1974’s “Court and Spark”) — is overflowing with amazing melodies and deeply personal lyrics that resonated with a generation of people seeking solace in music.  Although born in the prairies of Canada, Mitchell became enamored (for a while) with the Golden State, and her simple cottage in the Laurel Canyon area of Los Angeles.  In “California,” she realizes how much she misses it when traveling in Europe:  “My heart cried out for you, California, California I’m coming home, oh make me feel good, rock and roll band, I’m your biggest fan, California, I’m coming home…” 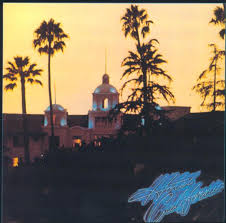 The biggest selling song about California explores the dark side of fame, fortune and decadent excess, as examined (and lived) by The Eagles in the later ’70s.  As lyricist Don Henley put it, “We wanted it to be a weird, vaguely mysterious scenario, kind of like an episode of ‘The Twilight Zone’ where the guy feels tempted and then trapped.”  It’s indeed quite a damning commentary on that era:  “You can check out any time you like, but you can never leave… They’re livin’ it up at the Hotel California, what a nice surprise, bring your alibis…”

This tragic teen anthem to drag racing includes several specific references to streets along the Sunset Strip in West Hollywood and Beverly Hills:  “I flew past LaBrea, Schwab’s, and Crescent Heights, and all the Jag could see were my six tail lights, he passed me at Doheny, then I started to swerve, but I pulled her out and there we were at Dead Man’s Curve…”  Over the years, the song has come to refer to virtually any dangerously designed roadway where people die in auto crashes.  Brian Wilson and Jan Berry teamed up to write the tune, which reached #8 on the charts.

The members of this coed singing group were all East Coast-based, struggling to make ends meet in various groups doing the occasional gig.  While dealing with the freezing, grey weather of New York City, they pondered the idea of heading to the West Coast, where the music scene seemed to be migrating.  The lyrics John Phillips came up with
are all about how miserable he is to be in the New York cold, and imaging the warm breezes that await him if he can just get to California:  “I’d be safe and warm if I was in L.A., California dreamin’ on such a winter’s day…”

L.A.’s undisputed king of eccentric experimentation came up with this scathing satire of the vapid teen girls who roamed the malls of the San Fernando Valley in the early ’80s.  He recruited his 14-year-old daughter Moon Unit to record the various “Valspeak” catch phrases of the period she overheard them saying:  “She’s like, ohmygod!”  “Barf out!”  “I am so sure!”  “That’s so bitchin’!”  “I’m like freaking out totally!”  “Gag me with a spoon!”  It caught on, and became Zappa’s only appearance on the Top 40, peaking at #32.

This rough-and-tumble band from Manchester, England, who gave us such rock classics as “House of the Rising Sun, “It’s My Life,” and “We Gotta Get Out of This Place,” toned things down considerably for this rather delicate ode to the City By The Bay.  Once you get past the obnoxious spoken intro, this song, written by Burdon and the band, offers a complimentary description of San Francisco’s psychedelic music scene and its evening weather (which is actually mostly chilly):  “Strobe light’s beam creates dreams, walls move, minds do too, on a warm San Franciscan night, old child, young child, feel all right, on a warm San Franciscan night…” 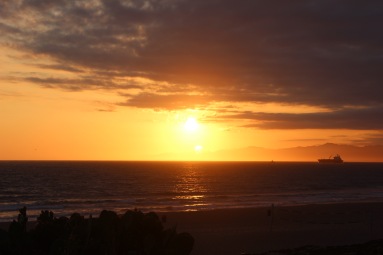 The basic rock and roll structure, the twangy guitar, the Farfisa organ — all the elements that help evoke mid-’60s California are in evidence on this classic slice of West Coast surf music:  “Well, I’m going out west, out on the coast, where the California girls are really the most… Well, they’re out there a-havin’ fun, in the warm California sun…”

Note:  Just thought I’d point out that most of the photos accompanying this post were taken by me between 2001-2016.  It’s pretty hard to take a bad photograph here with this kind of scenery…

And here’s my honorable mention list, which includes entries from more recent decades: