What makes a hit song?  A catchy melody, of course, but also, typically, an indelible chorus with a repeated catchphrase and memorable lyrics you can sing along with.

Well, not always lyrics, as it turns out.  Back in the ’50s and ’60s especially, and well into the ’70s, you can find almost 50 entries on the Billboard singles charts of instrumental songs that made the Top Ten.  Nearly 20 of those reached the #1 position, sometimes for multiple weeks. And another 50-60 at least made the Top 40, bringing the total number of instrumental hits to well over 100.

How did that happen?  Doesn’t a hit single need lyrics to become the kind of “earworm” song that stays in your head all day long after hearing it?  Not necessarily; a compelling instrumental passage can be as addicting as a vocal hook.  Take Edgar Winter Group’s “Frankenstein,” for example.  That monstrous main riff is arguably every bit as mesmerizing as a repeated lyric like “I’d like to hear some funky Dixieland…”

These instrumental hits came in a number of sub-categories.  Theme songs from movies and TV shows make their way into the Top 40 from time to time; surf music and disco sometimes offer irresistible instrumental riffs that don’t need words; and jazz artists who play sax or trumpet have been known to have a Top Ten hit or two without lyrics to carry the songs.

I’ve selected a baker’s dozen Top Ten instrumental songs that should be familiar to most of you — if not by the title, then by the first 15 seconds of the song itself.  A Spotify list at the end will allow you to sample the songs as you read.  Enjoy! 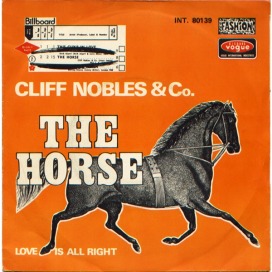 Anybody recognize this title?  Didn’t think so…but I’ll bet you recognize the main riff, because it reached #2 in June 1968 and sold a couple million copies.  This track was released as the B-side of a song called “Love is All Right,” which is the same song with vocals and lyrics.  Radio stations preferred the instrumental version (called “The Horse” for no discernible reason), and the hit was attributed to singer Cliff Nobles, even though his vocals were removed.  Listen to both versions on the Spotify list below.

Hailing from The Netherlands, this progressive rock band majored in instrumental pieces with plenty of Jethro Tull-like flute by Thijs van Leer and histrionic guitar solos from Jan Akkerman.  Very few tracks (if any) on their early ’70s albums had any vocals; could be they didn’t know any English, but I’m not sure about that…  In any event, in the spring of 1973, “Hocus Pocus,” a hard rock track from their 1971 album “Focus 2:  Moving Waves,” reached #9 on the US singles chart.  It was technically an instrumental if you don’t count the incessant yodeling and high-octave vocalizing heard throughout the song.

This #1 hit from the summer of ’68 was written as an instrumental by an African composer named Philemon Hou, and made famous by South African jazz trumpeter Hugh Masekela, who was among the surprises at the 1967 Monterey Pop Festival.  His version, which was #1 for two weeks, has a reggae flavor and features a prominent cowbell (!) throughout.  A year later, a group called The Friends of Distinction recorded another version with lyrics (“Grazing in the grass is a gas, baby can you dig it…”) written by member Harry Elston, with a faster, funkier arrangement, and it reached #3 in the summer of ’69.  Both versions are on the Spotify list.  You decide which is better.

It takes guts to lift a 250-year-old classic hymn by Johann Sebastian Bach (“Jesu, Joy of Man’s Desiring”) and turn it into an instrumental piece of pop confection, but a British band called Apollo 100 did exactly that, and sure enough, it went to #6 on the US charts (but made no appearance on UK charts).  Played to a straight 4/4 beat, dominated by organ, harpischord and lead guitar, “Joy” probably exposed huge sections of the US radio audience in 1972 to the music of Bach, even if it certainly was not how he intended…

Coffey was a guitar prodigy out of Michigan who quickly became known for innovative techniques, which caught the ear of Berry Gordy and Norman Whitfield at Motown Records.  Coffey became a regular in the Funk Brothers, the Motown house band, and was responsible for most of the guitar work on the latter day Temptations hits (“Cloud Nine,” “Ball of Confusion,” “Psychedelic Shack”), Edwin Starr’s “War” and Freda Payne’s “Band of Gold.” In 1971, he recorded his own guitar-laden instrumental track, “Scorpio,” which became a US hit at #6.

Williams was both a musician and a comedy writer, and was head writer for the CBS variety show “The Smothers Brothers Comedy Hour” in the late ’60s.  He was given several opportunities to showcase his instrumental acoustic guitar number “Classical Gas” on the program, which gave it valuable exposure and helped it reach #2 on the charts in the fall of 1968.  The song, originally titled “Classical Gasoline,” won multiple Grammys.  Mason went on to write comedy for “Saturday Night Live” as well.

Here’s another track originally issued as a B-side (this one to a forgotten song called “Behave Yourself”) that went on to become one of the most popular instrumental tracks in rock/soul history.  Written by Booker T. Jones, the track prominently features Jones’s Hammond organ on a spooky 12-bar blues structure, interrupted periodically by Steve Cropper’s fine guitar work.  It reached #3 in the US and #7 in the UK.  Evidently named after the cat of one of the M.G.’s, the track has been used in several major films over the years, including “American Graffiti,” “The Flamingo Kid,” “Happy Gilmore,” “The Sandlot” and “Get Shorty.”

As disco was just getting started, Kenny Gamble and Leon Huff of Philadelphia International Records wrote an instrumental piece to be used as the theme song for “Soul Train,” the Chicago-based TV show featuring R&B/soul/disco music that was about to go national.  Their label’s house band MFSB (Mother, Father Sister, Brother) laid down the groove, the recording was bathed in strings and horns, and then, tacked on the end, the vocal group called The Three Degrees added one line of lyric (“Let’s get it on, it’s time to get down”), repeated 6-7 times.  It was officially the first TV theme song (and, unofficially, the first disco song) to reach #1 on the US singles chart. 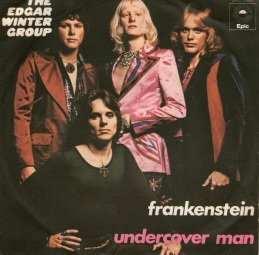 Once again, we have a happy accident:  This instrumental track was added as an afterthought to the group’s LP “They Only Come Out at Night” (and B-side of the since-forgotten single “Hangin’ Around”).  It was a series of spliced-tape sections pieced together in the studio, which drummer Chuck Ruff described as “it’s like a Frankenstein monster taking shape,” and the track’s name was born.  It went to #1 in the spring of ’73.  Edgar Winter, with guitarists Ronnie Montrose and Rick Derringer aboard, had a short but successful run as a live act, and Winter was the first performer to ever strap a keyboard around his neck, which allowed him to walk around the stage playing synthesizer parts as the song’s lead instrument. 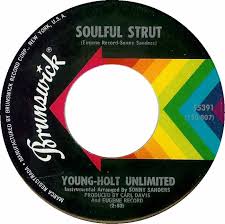 Never heard of the song or the band, right?  Well, you’ll surely know the song when you hear it — it reached #3 in December 1968-January 1969 and was on the charts for three months.  With a strong horn riff and jazz piano solo, it did indeed have a soulful strut to it.  In fact, R&B singer Barbara Acklin recorded it as a single, with lyrics, called “Am I the Same Girl,” and “Soulful Strut” is actually the backing track to that recording embellished slightly.  Acklin’s version stalled at #79; in 1992, Swing Out Sister reached #45 with a strong cover rendition.  But the instrumental was by far the most successful version.

Alpert is a giant in the LA recording industry.  He played trumpet in the military and the USC marching band; he formed The Tijuana Brass to play songs inspired by Mexican marachi music; had five #1 albums and 28 LPs overall, sold 70 million records and won nine Grammys; wrote numerous pop hits, including Sam Cooke’s “Wonderful World” and Dionne Warwick’s “Do You Know the Way to San Jose”; founded A&M Records; and is the only musician in chart history to have a #1 vocal hit (“This Guy’s in Love With You,” 1969) and a #1 instrumental hit (“Rise,” 1979).  With the Tijuana Brass, he made many memorable instrumental tracks (“Tijuana Taxi,” “Spanish Flea,” “Mae”) and had two top ten hits, 1962’s “The Lonely Bull” and 1964’s “A Taste of Honey.” 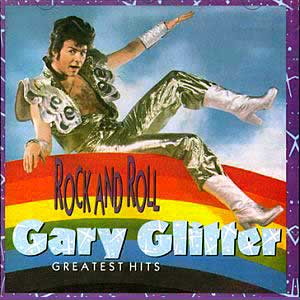 Born in Oxfordshire as Paul Gadd, the man whose stage name was Gary Glitter was a very popular glam rock star in England in the 1972-1975 period, scoring a dozen Top Ten singles and rivaling Marc Bolan and David Bowie in that genre.  In the US, however, he was merely a one-hit wonder…but what a hit it was.  The lyric-less “Rock and Roll Part 2” reached #7 on the charts here in 1972, but more important, it became (and still is) the noisy, obnoxious chant heard everywhere in arenas and stadiums when the home team is doing well.  By the way, there is a “Part 1,” with lyrics and everything — in fact it was the original A-side, and “Part 2” was the B-side…  Both are on the Spotify list if you’re interested.  Sad to say, Gadd was convicted in 2015 of multiple lurid sex offenses and is currently serving prison time.

Academy Award winner Max Steiner, an Austrian-born composer who is regarded as “the father of film music,” wrote the music for this theme song for the mildy risque 1959 romantic drama “A Summer Place,” starring Sandra Dee and Troy Donahue.  The movie was a modest succes

s, but the theme song, in its instrumental version as recorded by the Percy Faith and His Orchestra, was the #1 song in the country for an unprecedented nine weeks in 1960, a record that wouldn’t be broken for 17 years.  The Percy Faith recording was also the first instrumental and first movie theme song to win a Record of the Year Grammy.  Steiner wrote dozens of popular film scores, most notably for “Gone With the Wind” and “Casablanca.”  The song does have some lame lyrics, written by Mack Descant, and there are a few vocal versions by the likes of The Lettermen and Andy Williams.

Other instrumental songs that were #1 hits:

Beyond the Top 40 charts, the rock music landscape has hundreds and hundreds of instrumental tracks, especially in the progressive rock and jazz fusion genres.  For example, just about everything guitar great Jeff Beck ever recorded is an instrumental.  The Allman Brothers were famous for long instrumental pieces, on both studio and live albums (“In Memory of Elizabeth Reed,” “Jessica,” “Hot ‘Lanta,” “You Don’t Love Me,” “Les Brers in B Minor,” “High Falls”).  The Alan Parsons Project had at least one instrumental track per LP throughout their 10-album run.  Santana (the band and guitarist Carlos) loved to stretch out on instrumental numbers like “Soul Sacrifice,” “Europa,” “Tales of Kilimanjaro” and “Samba Pa Ti.”  Led Zeppelin and Cream both had instrumental drum solo tracks (“Moby Dick” and “Toad,” respectively).  Yes and Genesis each offered the occasional instrumental foray featuring one member or wrapping up a concept album (“Clap” and “Los Endos” respectively).

And lastly, don’t miss the aptly titled instrumental track “Song With No Words” from David Crosby’s 1971 album, “If I Could Only Remember My Name”…