I remember vividly my introduction to the extraordinary Leonard Cohen.

I was 15, in that “coming of age” period of life in the summer of 1970.  A friend whose musical tastes I respected suggested I check out “Songs of Leonard Cohen,” the debut album that had been released two years prior.

I enjoyed my Beatles, my Cream, my Doors, my Hendrix…but I was also partial to the dulcet strains and harmonies of Simon and Garfunkel, Judy Collins, Bob Dylan, Peter, Paul & Mary, Richie Havens and Crosby, Stills and Nash.  So I was receptive to an artist whose work leaned toward the introspective, the dark and brooding, the thought-provoking and poetic.

All it took to hook me was the first song on Side One, the beautifully delicate “Suzanne.”  Three verses, no chorus.  Just a Spanish-type guitar accompaniment, light strings used sparingly, a gentle female backing vocal, and the honest, yearning voice of Cohen, offering up astonishingly poignant lyrics about the wife of a close friend.

Leonard Cohen died last week, at age 82.  He wasn’t much interested in being a star, although he eventually topped the charts in some countries.  He was an artist, not a celebrity.  He was passionate about the written word — novels, poetry, song lyrics — and made his mark in all of these.

When I decided I would devote a blog entry to Cohen, I suspected that some of my readership had little knowledge of him or his body of work, and in my conversations with friends and acquaintances, this suspicion was confirmed.  People who don’t follow music much had never heard of him.  Others knew him solely for his now hugely famous “Hallelujah,” a 1984 composition that has been covered by 50-plus artists in the years since.  A few were among the fervent devotees who have embraced his music for five decades.

So let’s take a closer look, shall we, at the enigmatic Canadian-born artist with an international following who is often mentioned as a major influence by musicians ranging from country music titan Johnny Cash and post-punk rocker Nick Cave to mainstream pop singer Jennifer Warnes and ’90s alt-rock band The Pixies.

Cohen was born in Montreal back in 1934 to an Orthodox Jewish family.  His Russian mother loved to sing and often exposed Cohen to traditional folk melodies.  He taught himself guitar, preferring flamenco and classical genres, and also developed an early interest in theatre, literature and poetry.  He had just graduated from McGill University when he published his first poetry collection, “Let Us Compare Mythologies,” at age 22.  Five years later, his second book of poems, “The Spice Box of Earth,” was widely praised by literary critics, and Cohen was hailed as “perhaps the best young poet in Canada right now.”

A modest trust left by his father (who died when Cohen was just nine years old) allowed him the opportunity to broaden his horizons by moving to the Greek island of Hydra for several years, where he continued his writings, including another book of poems and two novels.  Ultimately, however, the simple, spartan lifestyle there left him struggling and unfulfilled, so at 32, he moved to New York with aspirations of being a singer-songwriter.

Cohen put his unparalleled way with words to use composing songs with penetrating, sometimes harrowing lyrics with a sophistication uncommon in popular music.  While his music explored sobering subjects like religion, politics and death, he found a way to lace his lyrics with wry, suggestive phrases that balanced the heavy topics with a degree of levity.

Judy Collins, an established artiste with a crystalline voice, met Cohen in the clubs of Greenwich Village.  “I was so moved by his singing voice, and by the songs, and by his whole presence,” she said in 1987.  “There was something ethereal and at the same time earthy about his voice.  When Leonard sang, I was entranced.  I became immediately devoted to him.”  She had been so floored by the beauty of “Suzanne” that she recorded it on her “In My Life” LP and even released it as a single, even before Cohen had released his own version.  On her next LP “Wildflowers,” which made Collins a star with the Joni classic “Both Sides Now,” she firmly showed her fondness for Cohen’s music by including three of his songs, including the lovely “Sisters of Mercy.”

Thanks in part to a full-court press by his manager, Cohen soon became the next in a long line of musical icons “discovered” by Columbia Records giant John Hammond.  Impressed by his demo recordings and then by an in-person meeting at the famed Chelsea Hotel in New York, Hammond signed Cohen to the label, and “Songs of Leonard Cohen” finally 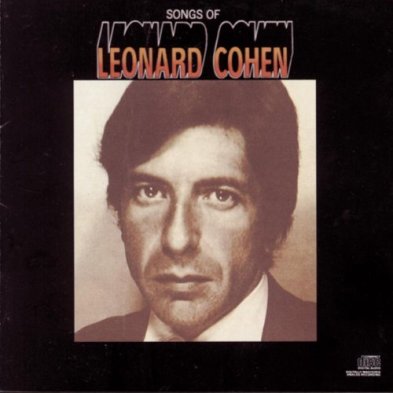 arrived in December 1967.  The response was…underwhelming.  British buyers took notice and sent the album to #13, but his work went mostly unappreciated in the US, where it stalled at #83.  In his native Canada, curiously, the LP failed to make the charts at all.

But musicians of all stripes were stunned.  In addition to the New York axis of songwriters like Dylan and Paul Simon, artists as diverse as Neil Diamond and Roberta Flack took notice as well, recording their own renditions of “Suzanne” and others.  Nashville-based country musicians such as Charlie Daniels and Charley McCoy recall how much they enjoyed Cohen’s first album.  “His songs were so simple but so deep,” said Daniels, who participated in sessions for Cohen’s second release, 1969’s “Songs From a Room” (which included the much-covered “Bird on a Wire”).  “I learned from working with him that, sometimes, less is more.  That was the thing about his music.  It was so fragile.  You just stayed out of his way.  That was the approach.  It was relaxed.”

In the four-plus decades since those first albums, Cohen’s life has been an interesting journey.  He took several sabbaticals, immersing himself in other pursuits.  He continued writing and publishing poetry; he studied Buddhism and was ordained as a monk following a monastery reclusion in the 1990s; he was involved in several relationships but never married, although he fathered two children. 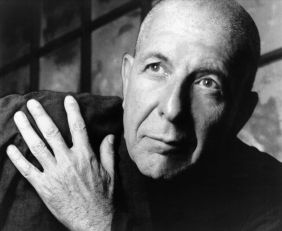 Meanwhile, he periodically recorded and released albums of new material, which pleased his core audience and drew respectful reviews, but failed to generate sales.  In fact, all six albums released between 1974 and 2000 — “New Skin for the Old Ceremony,” “Death of a Ladies’ Man,” “Recent Songs,” “Various Positions,” “I’m Your Man” and “The Future” — failed to make the US charts, and the latter three performed only modestly in the UK and Canada.

Cohen may have been widely respected by musicians and songwriters, but the praise was hard won.  In a 1992 interview, he discussed the arduous process of how his songs are born:  “I’ve never found it easy to write.  I don’t want to whine about it, but it’s a bitch!  It’s terrible work.  I’m very disciplined in that I can settle down into the work situation.  But coming up with the words is very hard — hard on the heart, hard on the head, and it just drives you mad.  Before you know it, you’re crawling across the carpet in your underwear trying to find a rhyme for ‘orange.’  It’s a terrible, cruel job…but I’m not complaining.”

We are all the beneficiaries of his perseverance in this difficult trade he chose for himself, because we get to read and hear lyrics like those in 1992’s “Democracy”:

“It’s coming from the sorrow in the street, the holy places where the races meet, from the homicidal bitchin’ that goes on in every kitchen to determine who will serve and who will eat, from the wells of disappointment where the women kneel to pray, for the grace of God in the desert here and the desert far away, democracy is coming to the U.S.A…”

While Cohen’s albums didn’t sell well, his concerts proved much more successful.  He toured Europe, Australia, Canada and the US three times in the ’70s and twice more in the ’80s, as he developed new ways to present his old and new material that incorporated a bigger, fuller sound as directed by collaborators like John Lissauer, Phil Spector, and Henry Lewy.

He saw a modest resurgence in recognition in the US in 1987 with the release of pop star Jennifer Warnes’ tribute album “Famous Blue Raincoat,” on which she offered cover versions of a dozen Cohen tunes, including an outstanding take on his as-yet-unreleased beauty “First We Take Manhattan,” in which Cohen proposes world domination through music instead of warfare:  “I thank you for those items that you sent me, the monkey and the plywood violin, I practiced every night, now I’m ready, first we take Manhattan, then we take Berlin…”

Said Warnes of her love for Cohen’s music:  “I’m crazy about Leonard and his songs, and I love singing them.  My managers always advised me, ‘Please leave those mournful songs out of your repertoire.’  I don’t know why Americans seem to resist the full expression of sorrow and complex emotions in their music, rather than just sex and happiness.”

Another tribute album, “I’m Your Fan” in 1991, was comprised of Cohen songs as performed by 15 different artists including R.E.M., Ian McCulloch, The Pixies, Nick Cale and James.

A difficult period emerged in 2004 when Cohen’s daughter discovered improprieties in the management of her father’s financial affairs, as handleded by longtime manager Kelley Lynch.  Despite successful lawsuits attempting to reclaim millions of missing dollars, Cohen was able to realize only a fraction of what had been stolen, and he found himself unable to enjoy retirement as he had intended.  Drawing on his Zen philosophy of serenity and acceptance, he pulled himself together, and in 2008 at the age of 77, he resumed his career with a resurgence of enthusiasm and perseverance. 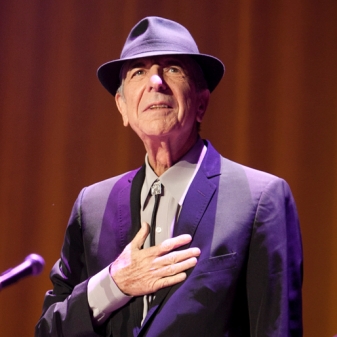 Cohen was delighted and “humbly surprised” to be greeted by rapturous audiences worldwide when he embarked on multi-city tours, performing three-hour shows, usually with a band, an orchestral section and background chorus.

By then, his stirring 1984 composition “Hallelujah” had emerged as his new signature song.  In 2008, he set a remarkable record:  Three different versions of “Hallelujah” occupied spots on the British charts simultaneously.  The late Jeff Buckley’s gorgeous rendition, first released in 1994, rested comfortably at #1; singer Alexandra Burke, who won the 2008 edition of “The X Factor” British TV singing competition program, held the #2 slot with her version; and Cohen’s 1984 original recording logged in at #36.

Cohen has said he wrote as many as 80 verses for “Hallelujah,” eventually settling on just four for his recorded version, but he often sang completely different verses in concert, and others who recorded the song sometimes sang still different verses.  Here’s my favorite:  “Your faith was strong but you needed proof, you saw her bathing on the roof, her beauty and the moonlight overthrew you, she tied you to a kitchen chair, she broke your throne, she cut your hair, and from your lips she drew the Hallelujah…”

In 2012, his album “Old Ideas” reached #3 in the US, his highest charting ever here, and #1 in Canada and three other European markets.  Two subsequent LPs, 2014’s “Popular Problems” and 32016’s “You Want It Darker,” also went Top Twenty here and #1 elsewhere.  Nearly 50 years after his debut, Cohen was an international superstar.

But cancer had taken hold, weakening his ability to perform and record.  On November 7, following a serious fall in his Los Angeles home, he died.  Per his wishes, he was buried in a simple pine box following a Jewish funeral service in Montreal.

What a fitting eulogy for Cohen, five days after his death, that “Hallelujah” was the song chosen by Kate McKinnon, again appearing as Hillary Clinton, to sing on “Saturday Night Live” in a chilling, eerie performance in the wake of the 2016 election.  “Love is not a victory march, it’s a cold and it’s a broken Hallelujah…”  He was no doubt smiling in gratitude from the afterlife.