Editor’s note:  Bruce is on vacation this week.  In lieu of a new entry, Hack’s Back Pages is re-running a piece from October 2015 about music festivals, in commemoration of the second weekend of Coachella happening this weekend in Southern California, considered the kickoff of the festival season.

Rock music festivals — where multiple acts perform on one site for thousands over two or three days — are everywhere now, and very big business these days.  But it wasn’t all that long ago when the very idea was summarily dismissed as too costly, too unwieldy, maybe even too dangerous.

It’s generally agreed that the concept of assembling many musical artists on one outdoor stage for a day or two was born in the mid-’50s, when the first Newport Jazz Festival was held in 1954 to bring jazz to the Rhode Island resort town.  Impresario George Wein assembled many top jazz artists of the day, and the event attracted 13,000 over two days.  That festival has changed venues and even cities over the years, especially in the 1970s, but returned to Newport in 1981 and still operates there today, where the 62nd Festival was held three months ago. 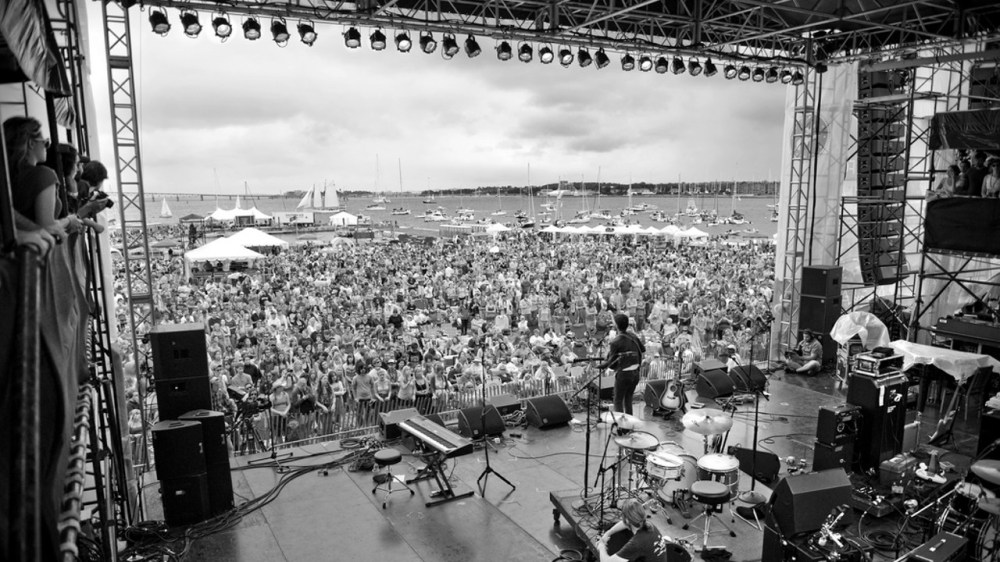 Wein also initiated the Newport Folk Festival in 1959, staging a two-day event that featured folk, blues, country and bluegrass artists of the period.  It stopped operating in the late ’60s but resumed in 1985 and still attracts crowds of 10-12,000 today.

But as far as rock and roll was concerned, it was still somewhat of a bastard stepchild in 1967, not yet taken seriously by the mainstream press nor much of the public in the way jazz, folk or country were.  This exasperated major players like Paul McCartney, Cass Elliott and Stephen Stills, who had recently sat around chatting and wondering why a festival featuring rock and pop couldn’t be staged.

Influential LA producer Lou Adler, who also managed The Mamas and The Papas, recalls being approached in early 1967 by producers who wanted his group to headline a one-night, multi-act show at the Monterey Fairgrounds, the same site where small festivals featuring blues, folk and jazz had been held for several years.  When Adler discussed it with group leader Papa John Phillips, they decided that the potential was there to do something bigger, something more substantial that would do what the rock community had been hoping for:  to validate rock music as a credible art form alongside jazz, folk and other genres.

“We thought, ‘Let’s get more than two or three artists, let’s get a dozen, maybe two dozen, major names, performing over three days,'” said Adler, “‘and let’s do it as a charitable event because that’s the only way we could afford the number and kind of artists we want.'”

In less than seven weeks, Adler and Phillips and a hard-working volunteer team pulled together the Monterey International Pop Festival, featuring a diverse bill of established artists (The Byrds, Simon and Garfunkel, Buffalo Springfield) and impressive newcomers (Janis Joplin, Jimi Hendrix, The Who) and wild cards like Ravi Shankar and Hugh Masekela and soul star Otis Redding, who all played for free.  Thanks to the work of charismatic publicist Derek Taylor (formerly with The Beatles), every major press outlet on the West Coast and dozens of news organizations across the country and Europe covered the event, who spread the word far and wide that rock and roll now had heft and cachet.

The organizers offered its artists first-class travel, food, accommodations and a quality sound system, all unheard of up to that point in the rock community.  The crowd — estimated between 25-50,000 on the 23-acre fairgrounds, although the enclosed performance area held less than 10,000 — was, by all accounts, respectful and congenial, without a single arrest.  Many stuck around and camped on or near the fairgrounds, while others who lived nearby went home at night and returned the following days.  Multiple vendors sold food, jewelry and other items.  “It was a very happy crowd, very good vibes all weekend,” said David Crosby.  The festival was filmed by noted director D.A. Pennebaker and became the hugely influential rock concert documentary film, “Monterey Pop.”

The success of the event was followed by dozens of other regional festivals in various cities across the nation over the next couple of years.  Many were in California — San Jose, Costa Mesa, Los Angeles, Palm Springs — while others sprang up from Washington State to Florida, from Colorado to Michigan, from Texas to Wisconsin, from Louisiana to New Jersey.  Most of these, like Monterey, were one-time events, or two years at most.  In many cases, even though the festivals were usually considered successful from an artistic and economic point of view, the venues or local communities were unhappy with damage or unrest caused by the festivals and prohibited them in succeeding years.

In researching this column, I was surprised to learn for the first time about Summerfest, a music festival held in Milwaukee that began modestly in 1968 and has since grown into an 11-day extravaganza that will celebrate its 50th anniversary in 2017.  Unlike the other festivals mentioned here, it involves many different venues spread out along the city’s lakefront and no on-site camping.  It is sponsored by the city, with new facilities built periodically over the years to accommodate the local and out-of-town crowds alike.

And then there’s the biggie — the Woodstock Music and Arts Fair, held in upstate New York in August 1969.  Originally slated for property near the town of Woodstock, permission was rescinded, requiring relocating to a farm outside Bethel, NY.  The last-minute change meant there was time to build either the stage or the boundary fences but not both.  They opted for a high-quality stage and sound system, and as the masses started arriving the night before the three-day event, everyone just strolled in, making it a free concert and resulting in a financial bath for the promoters.  Word spread like wildfire and attracted music lovers in numbers far greater than anyone had imagined, causing massive traffic jams and impossible pressures on the ability of vendors, musicians or law enforcement to gain ingress or egress to the site.  Ultimately, more than 400,000 people showed up for a festival designed for maybe 150,000.

And yet, despite the circumstances, Woodstock became an iconic symbol of the “peace and love” movement.  With scarce food, inadequate bathrooms, and a torrential rainstorm halfway through that soaked everyone and everything, people seemed to get along remarkably well, sharing what they had and enjoying the mostly excellent music by a stellar lineup of top artists and newcomers alike.  A movie capturing the event in all its mud-soaked, half-naked glory was a huge box-office success, as was the triple album, highlighted in particular by appearances by Sly and the Family Stone, Ten Years After, Santana, The Who, Joe Cocker, Crosby Stills & Nash and Jimi Hendrix (even though the crowd had dwindled to less than 20,000 by the time he closed the show in the wee hours of the third morning).

From the emotional high of Woodstock, next came the notorious low of the free concert at Altamont Speedway in California in late 1969.  It was actually a pretty decent one-day show, according to a friend of mine who attended, featuring five major California bands and the Rolling Stones, but it was marred by heavy-handed security by the Hells Angels and a man beaten to death in front of the stage as the Stones performed.  It became, perhaps unfairly, a symbolic death knell for the peace generation.

Still, rock music festivals continued in the ’70s, although fewer in number, at least in the US.  The three-day Atlanta International Pop Festival in July 1970, featuring Jimi Hendrix and the Allman Brothers Band, drew 200,000.  Organizers of The Goose Lake International Music Festival in Michigan in August 1970, eager to eliminate the downtime between acts, featured a revolving stage that allowed one band to follow the next with only a five- or ten-minute wait.  Bumbershoot, based in Seattle, began its annual Labor Day weekend festival in 1971 and is still going strong 40 years later.  Additionally, many festivals and large-scale concerts proliferated in Europe, South America and Australia throughout the ’70s and ’80s.

Although not technically a festival, the Summer Jam at Watkins Glen, New York, in July 1973, a one-day show featuring The Allman Brothers, The Grateful Dead and The Band, holds the Guinness Book of World Records entry for “largest audience at a pop festival,” with more than 600,000 attending.  Oakland’s Day on the Green was an annual event at Oakland Coliseum from 1973 until 1991, when a helicopter carrying founder Bill Graham crashed upon departure, killing all aboard, a tragedy that brought a swift end to that tradition.

The most successful of the rock music festivals and large-scale concerts through the years have been those that emphasized benign crowd control measures, kept ticket prices reasonable, and offered liberal creature comforts including bathroom facilities, water stations, food vendors, on-site health clinics and hundreds of helpful, friendly volunteers.  Those tha

t failed to do so were often marred by violence and damage caused by frustrated concertgoers who turned into angry mobs.

Lollapalooza, which began in Chicago in 1991 as a forum for non-mainstream alternative/grunge bands and became one of the first touring festivals, eventually lost sight of its vision and was cancelled by 1997 around the same time alternative rock declined in popularity.  Proving it’s hard to recreate the magic of an iconic event 30 years later, Woodstock 1999, held in Rome, NY, 200 miles from the original Woodstock, was by all accounts a disaster, with Rage Against the Machine and other bands inciting the unruly crowd into burning vendor booths and trashing the grounds.

At the other end of the spectrum is the Coachella Valley Music and Arts Festival in Indio, California, one of best-run and most profitable festivals operating today.  Begun in 1999 as a two-day event, only three months after the debacle of Woodstock 1999, it skipped a year, then returned as a one day event in 2001, reverted to two days in 2002 and expanded to three days in 2007, including camping on site.  In 2012, it expanded to two successive three-day weekends, with each weekend offering identical lineups, thereby allow more fans access without overcrowding.  Single-day tickets were abolished in 2010, to mixed reviews, but by 2014, records were set when more than 570,000 attended over six days, even with a $325 price tag.

Also successful and popular among festival concertgoers is the Bonnaroo Music and Arts Festival, located an hour outside Nashville, TN.  Begun in 2002 as a four-day affair held each year in June, Bonnaroo (Creole slang for “a really good time”) at first focused on jam bands and folk rock but has expanded its lineup in recent years to include indie rock, classic rock, world music, hip hop, jazz, Americana, reggae and electronica.  Organizers are savvy enough to send out a booklet to ticket buyers with safety tips and their philosophy about coming prepared with comfortable clothes and a good attitude.

I asked my 20-something daughters and their friends why they enjoy attending festivals like Bonnaroo, which can sometimes seem like an endurance test even under the best conditions.  Here’s what they had to say:  “Nobody is in a bad mood and nobody seems to judge anyone.”  “It’s the living spawn of the original Woodstock.”  “Always friendly people, great food, the best music, truly unforgettable.”  “It can get crazy hot, but there’s free water and fill stations everywhere.”  “Everyone is encouraged to make friends, help one another and be kind.”  “Depending on the show schedule you choose, you can see dozens of the hundreds of bands at the various stages over the four days, so it’s a pretty amazing deal for $300.”  “Bonnaroo is my happy place.  I have no bad things to say.”