For most of us, our choices tended to lean toward the music we discovered when we were between about 14 and 25.  These were the albums we memorized, playing over and over again at pivotal times in our lives, and they occupy an important place in our hearts.

I could list my top 100 here, but that would probably be boring, and there isn’t space to talk about them all.  Instead, I’d like to take a closer look at two albums that rank in my Top 20.  They’re by the same group and released within 12 months of each other, and I’d wager they are favorites of many of my readers too.

In the late Sixties, the harmless, fun pop music of the ’60s (The Turtles, the Cowsills, Sonny & Cher) was still maintaining a hold on the singles charts as the heavier rock stylings of the blues/acid/psychedelic segment of the day (Jefferson Airplane, Jimi Hendrix, Cream) was making an impression on the album charts.

But then in May 1969, the pop/rock music world was given a sizable jolt with the

stunning debut of a new “supergroup” (when that term was brand new) who seemed to create a new rock and roll sub-genre — “singer-songwriter rock,” as it came to be known.

David Crosby, a superlative harmony singer, had been a major player in The Byrds, the band that had played a key role in bringing Bob Dylan’s music to a mainstream audience with their #1 version of “Mr. Tambourine Man” in 1965.  Crosby and leader Roger McGuinn had steered the group through impressive changes, offering up 12-string adaptations of the Book of Ecclesiastes (“Turn Turn Turn”), pop-oriented psychedelia (“Eight Miles High”) and straight-ahead pop rock (“So You Want to Be a Rock and Roll Star”).  Crosby began writing atmospheric songs that didn’t fit The Birds’ plans, which led to his stormy departure.

Stephen Stills brought even more diverse talent to the table.  With the seminal country rock band Buffalo Springfield, Stills had emerged as an extraordinarily skilled guitarist, both acoustic and electric, and his Louisiana-based vocals carried the day on original tunes like “For What It’s Worth” (“Stop, hey, what’s that sound”), “Bluebird” and “Rock and Roll Woman.”  He had also made major contributions to the Grammy-winning LP “Super Session” with Al Kooper and Mike Bloomfield.

Graham Nash, meanwhile, had been a founding member of Britain’s The Hollies, a hugely successful and influential pop harmony group throughout the ’60s, who scored on such tunes as “Bus Stop,” “Look Through Any Window,” “Carrie-Anne,” “Dear Eloise” and a dozen others.  It was Nash’s high harmonies that gave The Hollies their distinctive Everly Brothers-type sound.

So Crosby and Stills, each looking for a new direction, decided to put their talents together and began jamming, nurturing early demos of Stills’ “You Don’t Have To Cry” and Crosby’s “Long Time Gone.”  They liked where things were going, but they weren’t yet sure if they had what they were looking for.

Enter Nash, brought to them by The Mamas and The Papas’ Cass Elliot, a much-beloved “earth mother” of the Laurel Canyon scene, where Crosby and Stills and many other musicians were living at the time.  She had heard the early possibilities of Crosby and Stills, and openly wondered whether there was a place for Nash’s high voice on top of their work.

When they first sang together, taking a stab at “You Don’t Have to Cry” — “In the morning when you rise, do you think of me and how you left me crying…” — the shivers went up and down the spines of everyone who was in the room to hear it.  They actually fell

down laughing, totally blown away at the combined sound of their three voices. When Nash mentioned, “I’ve got a couple of songs I think might work for us,” they realized they had something truly special:  Three great songwriters with three great voices.  They rehearsed for months, then booked studio time, and whipped ten tracks into shape.

Entitled simply “Crosby, Stills & Nash,” the album was damn near perfect from beginning to end.  I couldn’t get enough of these incredible songs:  “Suite: Judy Blue Eyes,” “Marrakesh Express,” “Guinevere,” “You Don’t Have to Cry,” “Pre-Road Downs,” “Wooden Ships,” “Lady of the Island,” “Helplessly Hoping,” “Long Time Gone” and “49 Bye Byes.”  Stills played nearly all guitar parts, plus keyboards and bass, while Crosby and Nash focused on vocals, singing lead on their own songs and harmonies on the others.

Top 40 stations picked up on “Marrakesh Express” and “Judy Blue Eyes,” while the album rocketed to #6 on the album charts in the summer/fall that year.  They were a big hit at Woodstock in August, and were on their way to superstardom. 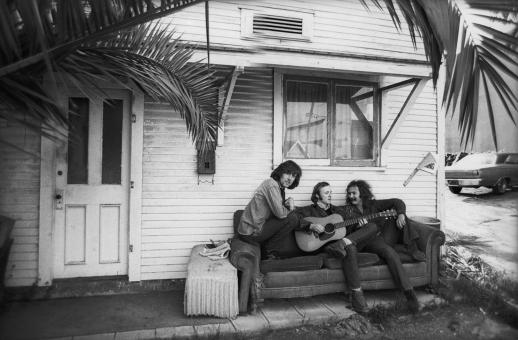 on the left, Crosby on the right, and Stills with an acoustic guitar in the middle, Diltz shot a roll of frames that captured the trio in their warm vibe.  When they looked at prints afterwards, they realized they had positioned themselves in the wrong order — Nash, Stills and Crosby.  A few days later, they returned to try again, but the house had been torn down!  So they used the shot they’d taken, and that’s why many people at first thought Crosby was the handsome dude in demin, and Nash was the wild-haired desperado in the fringe jacket.

Ahmet Ertegun, the savvy mogul who ran Atlantic Records, was eager to put his new stars on the road, but he knew they needed more musicians on stage to flesh out the sounds that Stills had created in a multilayered fashion in the studio.  The trio, adamant about keeping the friendly vibe between them, were wary, but agreed to take on drummer Dallas Taylor and bassist Greg Reeves for the tour.  But Ertegun wanted more than that, and he had a firm opinion about it:  “What you guys need is Neil Young.”

Young had been a very important part of Buffalo Springfield, and Stills admired the Canadian’s guitar playing, singing and songwriting.  But Young had been more of a moody loner than a team player, which caused such tension among the band members that they had imploded after less than two years.

And yet, there was no denying Young’s talents, and with Crosby and Nash on board, the 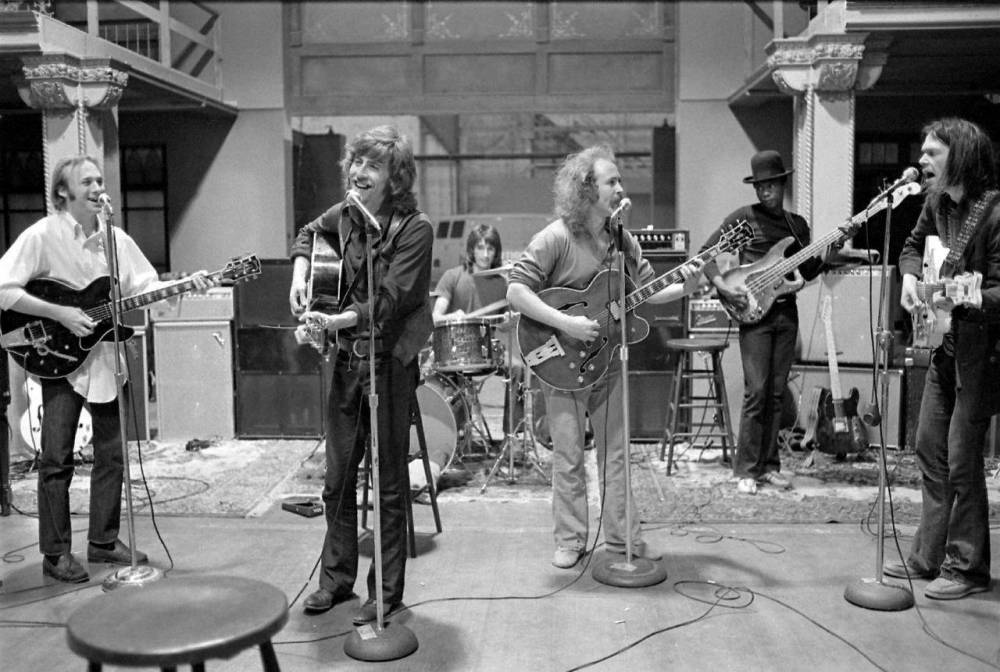 The group had gathered so much momentum that, by the time of its release in March 1970, “Deja Vu” had already reached gold record status, with a million advance orders.  To my ears, it’s even better than its predecessor, with another ten spectacular songs featuring the work of all four songwriters, plus a smokin’ electric arrangement of Joni Mitchell’s anthem “Woodstock.”  Crosby contributed “Almost Cut My Hair” and “Deja Vu,” Stills weighed in with “Carry On” and “4 + 20,” Nash added the radio hits “Teach Your Children” and “Our House,” and Young offered up “Helpless” and “Country Girl,” while

Stills and Young co-wrote the album closer, “Everybody I Love You.”

The second album feels darker in several ways.  There’s Young’s brooding persona coming through on “Country Girl,” and his harsh guitar work on “Woodstock.”  There is the ominous feeling of dread behind “4 + 20,” with its lyric, “I find myself just wishing that my life would simply cease.”  Most of all, there is Crosby’s angry paranoia on “Almost Cut My Hair,” a harrowing track that was written following the accidental automobile death of his girlfriend.  Even the album cover — corrugated black cardboard with gold-leaf lettering over a glued-on, sepia-toned photo of the band in Civil War-era clothes — was so much more unsettling than the communal front-porch cover of their debut LP nine months earlier.

But the magic of the first two albums lives on, at least for me.  All these decades later, I still treasure these two records.  I know all the lyrics by heart and love to play a few of the songs on guitar.  When I hear these tracks, I find myself singing along with different vocal parts as the mood strikes me.

Just listen to the beauty of Crosby’s songs “Guinevere” and “Deja Vu,” with their ethereal chords and striking vocal gymnastics.  Or the timeless words and accessible melody of Nash’s “Teach Your Children,” bolstered in a huge way by Jerry Garcia’s guest appearance on pedal steel guitar.  Or the amazing guitar dexterity behind “Suite:  Judy Blue Eyes,” Stills’ ode to his then-lover Judy Collins.  Or the smoldering guitar parts Young provided throughout “Deja Vu.”

They captured the times as well as any music being made during that period, and the competition was daunting:  The Stones, The Who, Simon and Garfunkel, Van Morrison, Marvin Gaye, Stevie Wonder, all operating at or near their peak.

Crosby, Stills & Nash.  And Young.   I always thought their name sounded like a law firm…but their music sounded like perfection.

The Spotify playlist below includes a few demo versions of the songs on the official releases.  I wanted to include more — there’s an amazing 8-minute version of “Almost Cut My Hair” you should hear — but some are not available through Spotify…

In future installments, I intend to write in detail about many more of my all-time favorite albums.  Needless to say, I recommend you “drop the needle” on these records to explore, and re-explore, their excellence.