On this long holiday weekend, as we haul out our red, white and blue outfits, raise the flags and bunting, and ooh and ahh over fireworks displays, we’re clearly going to need a

Fourth of July soundtrack.  Once again, popular music is ready and waiting with multiple choices.

But here at Hack’s Back Pages, I want to focus instead on some of the lesser known songs out there that pay homage to all things American — our country’s natural beauty, our freedoms and blessings, and our undying hope for better things to come.  We’re far from perfect, that’s for sure, but we keep on trying.

There’s a Spotify playlist at the bottom of this column for you to listen to as you read about these 15 featured tracks, plus another dozen “honorable mentions” to fill out the program for the holiday soundtrack.

A very happy Independence Day to you all!

Ricky Zehringer was only 17 when his band, The McCoys, had a #1 hit with “Hang On Sloopy” in 1965.  He became Rick Derringer in the Seventies and went on to become a solo star (“Rock and Roll Hoochie-Koo”) as well as an in-demand guest guitarist for Steely Dan, Edgar Winter, Alice Cooper and Todd Rundgren.  He wrote and sang “Real American” in 1985 for the World Wrestling Federation, and specifically Hulk Hogan, to use as entrance music.  The music and lyrics, which capitalized on the Cold War patriotic jingoism prevalent at the time, were ideal for the bombastic showbiz of pro wrestling.  Sample lyric: ” I am a real American, fight for the rights of every man, I am a real American, fight for what’s right, fight for your life…” 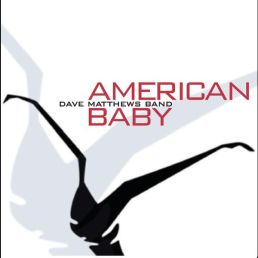 When George W. Bush won re-election in 2004, Matthews felt despondent enough to write this song the following day.  Its lyrics urged us to remain hopeful and proud, despite the troubling changes in values apparent in the way the country was conducting its war in Iraq.  The track, which appears on The Dave Matthews Band’s fourth consecutive #1 album “Stand Up,” became the group’s highest charting single at #16.  Sample lyrics:  “I hold on to you, you bring me hope, I’ll see you soon, and if I don’t see you, I’m afraid we’ve lost the way, stay beautiful, baby, I hope you stay, American baby…”

The one-of-a-kind Godfather of Soul had ruled the R&B charts from the early ’60s through the mid-’70s, and had a half-dozen Top Ten pop hits as well (“Papa’s Got a Brand New Bag,” “I Got You (I Feel Good),””Cold Sweat,”), but fell out of favor during the disco and post-disco era.  He had one last commercial peak in 1986 with “Living in America,” which reached #4.  Written by singer-songwriter Dan Hartman and producer Charlie Midnight, the song was used prominently in the film “Rocky IV” in scenes when the over-the-top patriotic character Apollo Creed entered the boxing arena.  Sample lyrics:  “Living in America, eye to eye, station to station, living in America, hand to hand, across the nation, living in America, got to have a celebration…”

This intelligent British art-rock band had moved to the US in 1977 following their commercial success here that year, and their next batch of songs reflected a breezy American influence.  The “Breakfast in America” LP was an enormous hit for Supertramp — it was perched at #1 for six weeks in the summer of 1979.  The title track (which stalled at #62 compared to the other three Top Ten hits from the LP) is about a poor British boy who fantasizes about visiting the US but lacks the money to do so:  “Take a jumbo across the water, like to see America, see the girls in California, I’m hoping it’s going to come true, but there’s not a lot I can do…”

“This is Not America,” Pat Metheny Group with David Bowie, 1985

In the 1985 spy film “The Falcon and the Snowman,” Sean Penn and Timothy Hutton play young Americans who sell secrets to the Soviets.  In one scene when they are beaten and tortured while in custody, they protest, “We are Americans!”  The response: “This is not America.”  The song, a collaborative effort by jazz guitarist Pat Metheny and the late great David Bowie, examines how our rights and privileges are often taken for granted until they disappear when on foreign soil:  “There was a time, a wind that blew so young, this could be the biggest sky, and I could have the faintest idea, for this is not America, this is not America…”

This eclectic band from Eugene, Oregon, has specialized in swing and ska music since the early ’90s.  While they have reached the mainstream pop charts only once, with their “Zoot Suit Riot” single and album in 1997, the group has been one of the hardest working touring bands in the nation for many years.  From their 2013 LP “White Teeth, Black Thoughts” comes the single “I Love American Music,” which celebrates the diversity of musical styles you can hear as you travel around this country:  “When the lights go down and my scales stop showin’, I’ll smash my fingers down on the only truth that’s still worth knowin’, play it, play it again Sam, I want American music, play it, play it again Sam, I need American music…”

Although she has escaped the attentions of mainstream music listeners, Chapin-Carpenter has been a consistent presence on country charts for 25 years, with three platinum albums and numerous Top Five singles there.  Her 2004 album, “Between Here and Gone,” contains the lovely ballad “Goodnight America,” which focuses on the gypsy lifestyle of being a musician on the road — “a weary traveler, but grateful to have the freedom to be one,” as she put it.  Sample lyric:  “I’m a stranger here, no one you would know, I’m from somewhere else, well isn’t everybody though, my ship has not come in, I don’t know where I’ll be when the sun comes up, until then, sweet dreams, goodnight America…” 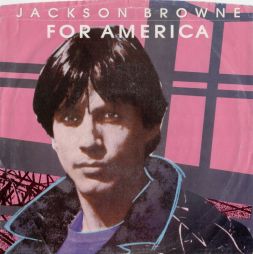 One of the premier singer-songwriters to emerge from Southern California in the 1970s, Browne has written dozens of articulately worded ballads and anthems to love and life (“For Everyman,” “Fountain of Sorrow,” “The Pretender”).  By the mid-’80s, the left-leaning Browne had grown disheartened with the actions the Reagan administration was taking abroad, and subsequently released the overtly political album, “Lives in the Balance,” which included the modest #30 single, “For America,” another song that wishes for better days ahead:  “I have prayed for America, I was made for America, I can’t let go ’til she’s comes ’round, until the land of the free is awake and can see, and until her conscience has been found…” 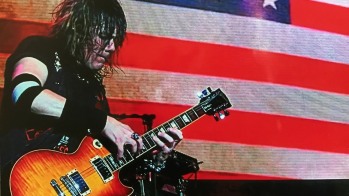 This San Francisco-based hard rock band had a pretty good run in the 1980s MTV era with its singles, albums and videos.  Their commercial peak came in 1984 with the #5 power ballad “Sister Christian,” but another song from that “Midnight Madness” album was the hard rock anthem “(You Can Still) Rock in America,” which missed the Top 40 but clicked with the patriotic Sammy Hagar-Ted Nugent crowd that ate up the pro-USA lyrics: “Little brother’s got it ready to roll, tires burning as they head for the show, light it up and turn the music up loud, and rock it, rock it, rock it, you can still rock in America, yeah it’s all right…” 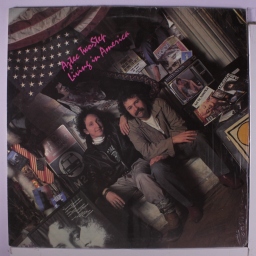 The duo of Rex Fowler and Neal Shulman formed the nucleus of Aztec Two-Step, a lighthearted, lively folk rock band out of Boston.  From their roots in 1971, they have continued to release music and perform live ever since, although without much chart success.  In 1986, they came up with this quirky, optimistic ditty in tribute to Americans everywhere:  “Here’s to the silver screen, ah-ah, the music scene in America, here’s to the arts and crafts, people who make us laugh in America, here’s to the songs, the dance, the true romance, all those who take a chance in America, and here’s to the people too, whose dreams have all come true in America…” 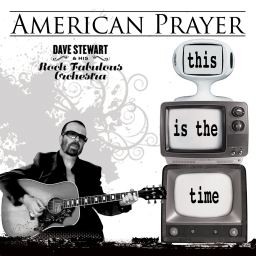 In 2002, Stewart, formerly with Annie Lennox and the Eurythmics, paired up with U2’s Bono to write this “paean to America based on the poetry of the Declaration of Independence and the taut truth in the Constitution.”  It was first performed during Bono’s Heart of America speaking tour that year to rally support for the fight against the AIDS crisis.  In 2008, Stewart altered some of the lyrics and recorded it “in honor of those working to make the world a better place.”  Sample lyrics:   “These are the hands, what are we gonna build with them, and this is the church you can’t see, and remember, give me your tired, your poor and huddled masses, you know they’re yearning to breathe free, this is my American prayer…”

Neil Young promised that he would reunite with Crosby, Stills and Nash if David Crosby successfully kicked his severe drug habit, which he did following a prison term in 1986.  The foursome recorded “American Dream” at Young’s ranch, and while the album reached #16 in early 1988, critics and many fans found it lacking somehow.  Young’s title track is a satire of 1980s-era sensational political scandals:  “Reporters crowd around your house, going through your garbage like a pack of hounds, speculating what they may find out, it don’t matter now, you’re all washed up, you tried to make a good thing last, how could something so good go bad so fast?, American dream, American dream…”

Singer John Kay and drummer Jerry Edmonton were among the key members of the ’60s Canadian-American band The Sparrows, who morphed into Steppenwolf, named for the Herman Hesse novel, and had several huge hits (“Born to Be Wild,” “Magic Carpet Ride”).  By the time of their fourth album in late 1969, Kay and Edmonton were writing more political lyrics, including a nine-minute suite entitled “Monster,” which recounted the history of the U.S. in mostly damning terms.  The suite’s final section, “America,” concluded on this uncertain note:  “America, where are you now, don’t you care about your sons and daughters, don’t you know we need you now, we can’t fight alone against the monster…”

There are dozens and dozens of versions of this stunning piece, which I’ve always felt would be a better National Anthem than “The Star Spangled Banner.”  It was first written as a poem by Katherine Lee Bates in 1893, then tweaked a bit with a few new lyrics in 1903 and again in 1911.  Samuel Ward wrote the music back in 1882 to an altogether different lyric, “O Mother Dear, Jerusalem.”  Ward’s hymn-like melody was first combined with Bates’s patriotic words in 1910 into the song we all know today.  In the Bi-Centennial year of 1976, two recordings received considerable airplay — Ray Charles’ stirring rendition on the R&B charts, and Charlie Rich’s commanding version on the country charts.  For something different but memorable, check out Keb’ Mo”s version from his “Big Wide Grin” album in 2001.

I’ve always felt that this song from Simon’s “There Goes Rhymin’ Simon” LP is one of his best works.  The majestic melody is lifted from Bach’s “St. Matthew Passion,” with poignant Simon lyrics that are simultaneously comforting and troubling.  Even 46 years ago, Simon was proud of his country, but concerned about its future:  “We come on the ship they call the Mayflower, we come on the ship that sailed the moon, we come in the age’s most uncertain hour, and sing an American tune, oh, but it’s all right, it’s all right, you can’t be forever blessed, still, tomorrow’s gonna be another working day, and I’m trying to get some rest…”