I’ve written about protest music before, but current events have compelled me to readdress the topic.  The “golden age” of protest songs may have been in the late ’60s and early ’70s, but that doesn’t mean artists from more recent decades haven’t felt the need to compose and record tunes that speak strongly about hot-button issues, some of which — war and racial injustice, to name just two — are the same damn issues we sang about a half-century ago.

Art as a form of protest — in paintings, in music, in films, in photography — has been a particularly potent way of expressing our contempt for society’s ills.  In particular, protest music has been around in this country ever since pre-Civil War slaves came up with songs bemoaning their brutal lot in life.

By the 1920s and ’30s, Delta blues musicians like Robert Johnson, Blind Willie McTell, Lightnin’ Hopkins, Sonny Boy Williamson and others wrote many dozens of blues songs about lack of money, lack of food, cheating spouses, broken down cars and other woes of bad breaks and hard times.  In 1939, Albert King summed it all up this way: “Born under a bad sign, I been down since I began to crawl, if it wasn’t for bad luck, I wouldn’t have no luck at all.”

In the ’40s and 50s, folk music leaders like Woody Guthrie and Pete Seeger began writing lyrics that exposed the hardships of the downtrodden and the unemployed.  The songs espoused peace and humanity, and took issue with political leaders who seemed to have darker agendas.  They posed philosophical questions (“Where have all the flowers gone?”) and described the horrors every soldier endures when war is waged (“Waist Deep in the Big Muddy”).

The Sixties famously brought marches, sit-ins, demonstrations and rallies, which occurred regularly in big cities across the nation and around the Free World.  And the lyrics in songs by Bob Dylan and others seemed to play a crucial, even central role in the proceedings.  “Blowin’ in the Wind,” “Masters of War,” Sam Cooke’s “A Change is Gonna Come,” Barry McGuire’s “Eve of Destruction”  — these were meaningful messages that, for the first time, were infiltrating the realm of popular music.  But even Dylan knew a song had only so much power to persuade:  “This land is your land, and this land is my land, sure, but the world is run by people who never listen to music anyway.”

In a blog post four years ago, I wrote about protest songs that had become commercially successful — songs like CSN&Y’s “Ohio,” Marvin Gaye’s “What’s Going On,” John Lennon’s “Give Peace a Chance,” Buffalo Springfield’s “For What It’s Worth,” Edwin Starr’s “War” and Creedence’s “Fortunate Son.”  I also listed another few dozen songs that, while not mainstream hit singles, nonetheless became popular in the both the counterculture and the wider culture of the time.

In this post, I’m stepping outside Hack’s Back Page’s comfort zone once again to write about music — protest music — from the most recent two decades.  It seems entirely appropriate to do so as protestors and law enforcement have faced off against each other in the streets of America these past two weeks.

Here are ten songs of protest released since 2000 that I’ve found worthy of discussion and your attention.  If there are others that strike a fervent chord with you, I’m eager to hear about them.

Arcade Fire may be a Canadian band, but they still have the right to make their feelings known about political power in a free society, be it in the U.S. or elsewhere.  Written by leader Win Butler with help from singer Mavis Staples in the spring of 2016 and released the day before Trump’s inauguration in January 2017, “I Give You Power” is a brilliantly concise reminder to those who win elections that they can lose their political power as easily as they win it:  “I give you power, power, where do you think it comes from, who gives you power, where do you think it comes from, I give you power, I can take it all away, I can take it away, watch me take it away…” 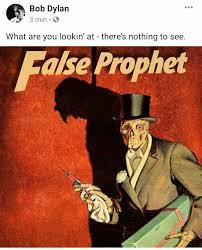 The man who offered up such iconic ’60s protest songs as “The Times They Are A-Changin'” and “Masters of War” is still at it nearly 60 years later with a new album of thought-provoking tunes.  In addition to a 17-minute epic about the Kennedy assassination called “Murder Most Foul,” Dylan has written “False Prophet,” which comments on our current situation but ends with hope:   “Another day that don’t end, another ship goin’ out, another day of anger, bitterness, and doubt, I know how it happened, I saw it begin, I opened my heart to the world and the world came in…”  Later, he makes reference to Trump and where he might be headed soon:  “Hello stranger, a long goodbye, you ruled the land, but so do I, you lost your mule, you got a poison brain, I’ll marry you to a ball and chain…”

Pearl Jam has a whole slew of overtly political songs in their catalog, and for their 2006 album “Pearl Jam,” several tracks dealt with the Iraq War and its aftermath, as well as the “War on Terror,” as it was referred to by the Bush Administration.  I think “World Wide Suicide” is the best of the bunch.  Singer Eddie Vedder has never been shy about challenging authority nor bemoaning the horrors of war in his lyrics:  “It’s a shame to awake in a world of pain, what does it mean when a war has taken over, it’s the same everyday and the wave won’t break, tell you to pray while the devil’s on their shoulder, the whole world over, it’s a worldwide suicide….” 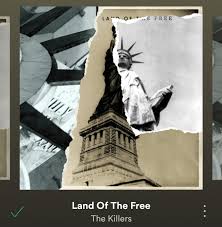 A Las Vegas-bred rock band since the early 2000s, The Killers have been led by singer-keyboardist Brandon Flowers, who has written or co-written nearly every song in their five-album repertoire, which have sold nearly 30 million copies worldwide.  Flowers recently wrote “Land of the Free,” a song that makes ironic use of the title to protest issues that still bedevil us in this country, specifically mentioning immigration, gun control and racism.  In regards to the unfairness of systemic racism:  “When I go out in my car, I don’t think twice, but if you’re the wrong color skin, you grow up looking over both your shoulders… Incarceration’s become big business, it’s harvest time out on the avenue in the land of the free…”

Dion DiMucci, popular singer of ’50s and ‘early ’60s hits like “The Wanderer” and “Runaround Sue,” has re-emerged recently with Paul Simon for a powerful duet about the late Sam Cooke, one of the best soul/gospel singers of all time, who was gunned down in 1964 by a white motel owner.  The lyrics deal with the racism of those times while reminding us that race relations are still tenuous in many parts of the country today:  “I never thought about the color of your skin, I never worried ’bout the hotel I was in, here in America, here in America, but the places I could stay, they all made you walk away, you were the man who earned the glory and the fame, but cowards felt that they could call you any name, you were the star, standing in the light that won you nothing on a city street at night…” 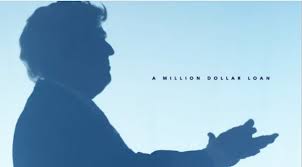 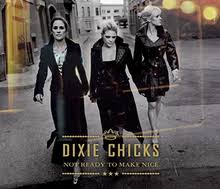 The Texas-based, three-woman country group, riding high in 2003 as one of country music’s most popular acts, came out against the Iraq War while performing in England, adding, “We’re ashamed that the President of the United States is from Texas.”  The backlash from the group’s conservative fan base was fierce and instantaneous, and most country radio stations began boycotting their music.  It took them off the charts for a few years before they returned with “Not Ready to Make Nice,” which reinforced their previous statements, not angrily but with a heartfelt rejoinder that defended their right to speak their minds:  “How in the world can the words that I said send somebody so over the edge that they’d write me a letter, saying that I better shut up and sing or my life will be over?  I’m not ready to make nice, I’m not ready to back down…” 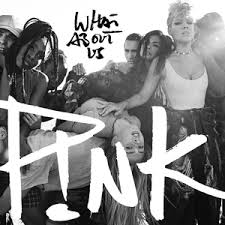 Alecia Beth Moore, better known as the multi-talented singer-songwriter Pink, has enjoyed a spectacular solo career since her debut 20 years ago.  Selling upwards of 90 million albums worldwide with multiple #1 albums and singles, she avoided being typecast as a mindless pop act by writing songs of real substance and using her gymnast-like dancing skills to reach new levels of artistry in her live performances.  When she wrote “What About Us” for her 2017 album “Beautiful Trauma,” she kept it general enough so it could be interpreted to be about a failed relationship, but most believe it to be a political protest song about the Trump administration:  “We are billions of beautiful hearts, and you sold us down the river too far, we were willing, we came when you called, but man, you fooled us, enough is enough…  What about all the times you said you had the answers? What about all the plans that ended in disasters?  What about love? What about trust?  What about us?…”

Not so much a song as a chant with gospel overtones, this track (the title is a contraction for “What the hell are you talking about?”) is a powerful message piece that Monae wrote and recorded with a loose collective of musicians she called Wondaland.  Originally, the verses painted vignettes of three black people who died at the hands of overzealous police, but as more such incidents began occurring, the lyrics evolved into a chanting of names of the victims, imploring listeners to “say their names!”  David Byrne, late of Talking Heads, was so impressed by it that he has been concluding all his concerts lately with his own rendition of it.  A live recording of Byrne with a chorus and tribal drums is included in the Spotify list below.

I’ve include two Spotify playlists.  One features the recent songs discussed above, while the other offers a handful of classic protest songs from the old days.