Periodically, I plan to use this space to pay homage to artists who I believe are worthy of focused attention — artists with an extraordinary, consistently excellent body of work and a compelling story to tell.  Some are commercial superstars; others have slipped under the radar of many readers.  Most will be somewhere in between those extremes.   In this essay, I look at the chameleon-like evolution of the nearly 50-year-old group known as Fleetwood Mac. 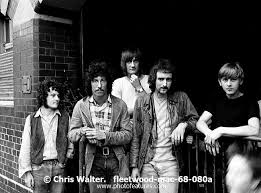 It seems safe to say that the overwhelming majority of Stevie Nicks fans have no idea that they owe a huge debt of gratitude to a Brit by the name of Peter Greenbaum, for without him, there would be no Fleetwood Mac.

In the summer of 1975, the majority of the American record buying public thought they were hearing the debut of a hot new band when they first heard “Over My Head” and 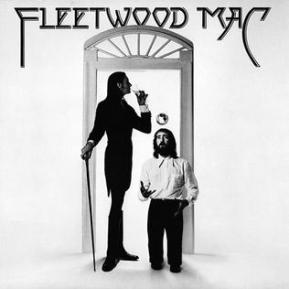 “Rhiannon,” two irresistible Top 20 numbers from a great new album called “Fleetwood Mac.”  I remember a friend raving about the album, but I was puzzled.  Wait a minute, I thought…Fleetwood Mac?  I’ve heard that name before.  They’ve been around for a long time, haven’t they?

Indeed they had.  This was not Fleetwood Mac’s debut, but in fact their TENTH album.  They had been making music, very different music, with an ever-changing lineup for eight years already.  This venerable band provides an excellent example of a band with one, two, maybe three previous lives before they finally reached star status.  As a public service to those who think Stevie Nicks invented Fleetwood Mac, and to those who know the truth but have forgotten, I offer you a look at the challenging journey this group took before they became a household name.

Flash back to 1966.  Greenbaum, who went by the name Peter Green, had been recruited as the new lead guitarist in John Mayall’s Bluebreakers, taking the place of Eric Clapton, who had left to form the power trio Cream.  Green enjoyed his brief tenure with Mayall’s outfit, but he too became eager to start his own band, and he was hellbent on convincing the group’s rhythm section to join him:  a solid drummer named Mick Fleetwood and a steady bass player named John (Mac) McVie.  In 1967, with second guitarist Jeremy Spencer also in the lineup, the new group was born as Peter Green’s Fleetwood Mac, and they soon evolved into one of the hottest acts in England, in concert as well as on record. 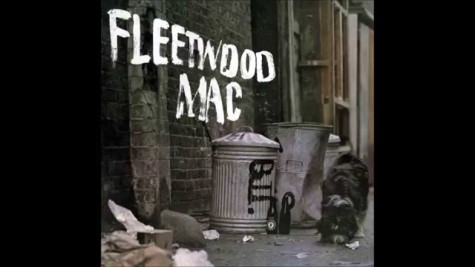 “We were a funny, vulgar, drunken vaudeville blues band,” Fleetwood wrote in his memoir, “playing music as much to amuse ourselves as to please an audience and make money.”  Green was a masterful blues guitarist and singer in the B.B. King tradition, while Spencer preferred the slide-guitar stylings of bluesman Elmore James, and loved to do impersonations of ’50s stars like Elvis and Buddy Holly.  The group’s first two albums, “Fleetwood Mac” and “Mr. Wonderful,” both ended up in the British Top Ten, showcasing both guitarists about equally, although Spencer proved to be too narrowly focused, and Green concluded the band needed another guitarist who could also help with songwriting and singing.

Enter 18-year-old Danny Kirwan, a fluid guitar player who also had a sweet voice and some fine songwriting skills.  And soon after his arrival, Fleetwood Mac enjoyed two huge Top Five singles, “Oh Well” and “Albatross,” in England in 1968 and 1969, and their third album, “Then Play On,” was an even balance of Green’s blues numbers and Kirwan’s more melodic songs.  Spencer was still on board but contributed little to the third LP.

Incredibly, the band actually outsold The Beatles and The Rolling Stones in U.K. record sales in 1969.  That’s truly amazing…but in America, they were nobodies.  Very few Americans beyond blues music aficionados had ever heard of Fleetwood Mac.

The effects of hallucinogenic drugs and the lure of esoteric spiritual cult groups proved too tempting for Green in 1970.  He never recovered from a potent LSD experience in March 1970, announced he was quitting the band, gave away his guitars and amps, and donated all his money to a sect.

By then, McVie had fallen in love with the wondrous talent of Christine Perfect, who had handled vocals and keyboards in another British band, Chicken Shack.  Once Green departed, and with Spencer withdrawing more and more from active involvement, Christine was tapped to contribute her talents to recordings on the band’s fourth album, 1970’s “Kiln House,” drawing the delightful art on the album cover and singing lead on an excellent Kirwan number called “Tell Me All the Things You Do.”

But then Spencer was bit by the cult bug too, and he disappeared while the band was in Los Angeles on an early US tour in early 1971.  He had joined a sect called Children of God and no longer wanted to be part of the music scene.  “It was so bizarre,” Fleetwood recalled.  “We lost our founder and second guitarist in less than a year.  We probably should’ve just broken up then, but I took over as de facto leader, and we decided to move ahead with Danny and Christine.”  Kirwan was emotionally fragile, not suited to the pressures of fronting the band, so once again Fleetwood Mac went searching for another singer-songwriter to bolster their ranks.

They found the right guy in Bob Welch, a great singer and songwriter and the first 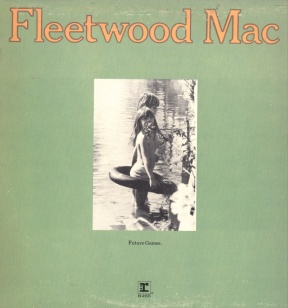 American in the lineup.  “Bob Welch basically saved Fleetwood Mac from extinction,” says Fleetwood, who eagerly signed the Californian in time for the 1971 album, “Future Games,” which featured Welch prominently in the 10-minute title track and Kirwan on two deliciously melodic tunes, “Woman of a Thousand Years” and “Sands of Time.”

British audiences who had loved Fleetwood Mac’s blues-based material were less than enthused with the new direction “Future Games” represented, and sales fell off dramatically in the UK.  But slowly, American audiences started noticing.  Whereas the first four albums had barely cracked the Top 200 in the US, “Future Games” reached #91, and the follow-up, 1972’s excellent “Bare Trees,” charted at #70.  Album tracks like “Bare Trees,” “Spare Me a Little of Your Love” and “Sentimental Lady” got some FM radio airplay in major US markets. 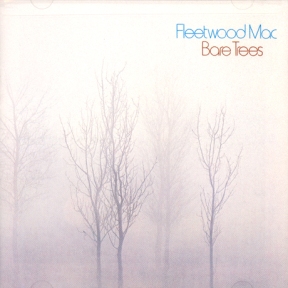 But it was a stormy, unstable time.  Kirwan’s fragile psyche was the next casualty — after an altercation with Welch during a tour, he smashed his prized guitar to bits backstage and refused to perform.  Kirwan was let go, so somehow, yet again, they were forced to search for a replacement.  They chose two:  guitarist (Bob Weston) and a singer (Dave Walker).  This lineup recorded not one but two albums in 1973 — “Penguin” and “Mystery to Me.”  Christine McVie and Welch handled all the songwriting at that point, including some classic tracks like “Dissatisfied,” “Just Crazy Love” and especially Welch’s “Hypnotized.”  Weston and Walker didn’t add much to Fleetwood Mac’s output, and Walker soon left because his singing style just didn’t fit in. 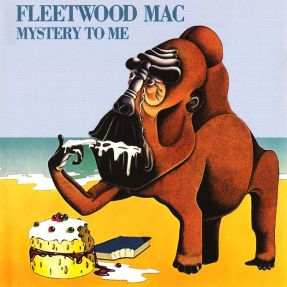 Weston’s departure was more problematic; he’d been having an affair with Fleetwood’s wife, and the bad vibes were so demoralizing that the group took a hiatus to collect themselves.

Their manager didn’t like that one bit and, claiming he owned the rights to the Fleetwood Mac name, sent a bogus band out on the road as Fleetwood Mac to honor the dates he’d booked.  “Man, that was a dark time,” says Fleetwood.  “We were prevented from recording or playing concerts.  I mean, it’s my damn name, and John’s, and we weren’t allowed to use it.”

Once that matter was resolved, the foursome relocated to Los Angeles to capitalize on their growing popularity in the US market, and recorded one last album, “Heroes Are Hard 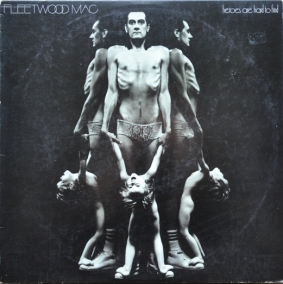 to Find,” in 1974, which broke the Top 40 in the US (#34).  But by then Welch was burned out and decided to call it a day.  It was time for Fleetwood to (what else?) find yet another guitarist to help keep the band alive.

Fleetwood was checking out a new recording studio on New Year’s Eve in Hollywood and was introduced to a guitarist who was cutting some demos in one of the studios.  He was duly impressed with the songs, the singing and especially the guitar work, and decided to invite Lindsey Buckingham to join Fleetwood Mac.  “Well, I’m interested,” he said, “but I’m part of a duo.  We’re together.  You can have us both, or neither of us.  Up to you.”  The other half of the duo?  A singer-songwriter-waitress by the name of Stevie Nicks.

Fleetwood figured, what the hell, and Buckingham and Nicks joined the band.

So when the “Fleetwood Mac” album and the singles “Over My Head,” Rhiannon,” and “Say You Love Me” (and the Nicks classic “Landslide”) arrived in the fall of 1975, most of America thought it was a new group.  In some ways, it was; with Nicks and Buckingham contributing three or four songs apiece, and McVie chipping in her three songs as well, the band now had a sunny California sound that was a very far cry from the British band’s earliest albums or even its most recent Welch-heavy LPs.

The new lineup toured relentlessly, first as a warmup act and eventually as a headliner, driven by the three songwriters and their different personas — McVie as sunny Earth mother, Buckingham as guitar virtuoso and Nick as a swirling, sultry Welsh witch, and always with the steady rhythm section of the veterans Fleetwood and Mac.  The album ended up reaching #1 in the US a year after its release, and they were the biggest thing going, in the heart of the disco era.

The band convened in a Sausalito studio to work on the all-important follow-up. It was immediately clear, however, that all was not well in the Fleetwood Mac camp.  Not only were the McVies contemplating divorce, Fleetwood’s relationship with his wife was on the rocks, and even the hot new duo of Buckingham/Nicks was in the midst of breaking up.  All that tension and drama, though, ended up producing some amazing songs, and the 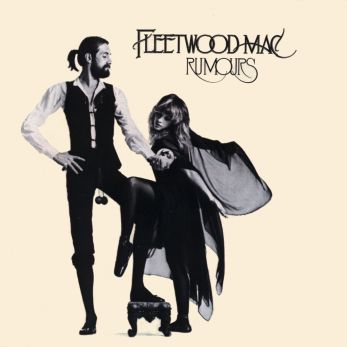 final product, “Rumours,” positively shimmered with lush vocals, tasty guitar licks and pretty melodies.  Record buyers in the US and the UK alike sent the album to #1, where it stayed for an astounding 30 weeks during 1977 and went on to sell more than 30 million copies worldwide.  “Go Your Own Way,” “Dreams,” “Don’t Stop,” “You Make Loving Fun,” “Gold Dust Woman,” and the songs just kept on coming.

The rest of the Fleetwood Mac story is well documented:  Three more successful albums (“Tusk” in 1979, “Mirage” in 1982, and “Tango in the Night” in 1987), multiple hit singles, prosperous tours, a few solo projects (Nicks’ “Bella Donna” in particular), excessive hedonism and drug abuse, Buckingham’s departure in 1988, two flat releases in the 1990s (“Behind the Mask” and “Time”), and a triumphant reunion concert and CD, “The Dance,” in 1997.  The fivesome is currently reunited after many years adrift and is in the middle of a lengthy tour, packing venues nationwide.

But isn’t it interesting that a band as huge as Fleetwood Mac could have such an unusual back story? Now and then, a “new” band seems to come out of nowhere to explode on the scene, but sometimes these bands are anything but new.  It might be worth your while to check out the history behind other bands like Fleetwood Mac, and listen to the earlier releases, where you just might find some excellent stuff waiting for you.