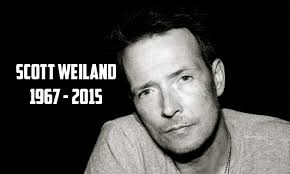 I’m betting that more than half of my readership — being children of the ’60s/’70s/’80s and mostly not very knowledgeable about bands since then — have never heard of Scott Weiland.

Although I know who he is/was — the lead singer of the Stone Temple Pilots and another “supergroup” assembly, Velvet Revolver — I had no idea that he was as successful or as revered as he is/was.  Stone Temple Pilots (named for its acronym STP, a notorious drug of choice at the time) had five consecutive Top Ten albums in the 1990s, including the #1 “Purple,” and Velvet Revolver had two Top Ten albums including the 2004 #1 LP “Contraband.”

Weiland played a crucial role in both bands’ success, and critics and fans have heaped praise on his recorded and live performances, despite the fact that his volatile personality and rampant drug abuse had him in and out of both lineups, and rehab facilities, for most of his professional life.

Weiland died, apparently of cocaine-induced heart failure, last week.  Okay.  Yet another casualty on the rock ‘n roll timeline.  So what?  We grow numb to these news stories because of their relative frequency.  If we loved the artist’s work, we grieve, we play their records, we wish someone had intervened to help before it reached its tragic end.  But ultimately, all we say each time, all we can ever say, is, “What a waste.”

It’s the worst kept secret in popular music that drugs and rock ‘n roll go together.  (Sex is part of that triumvirate, but we’ll leave that one aside for now.)  Blues and jazz musicians in the ’40s and ’50s regularly used drugs, and many of the rock musicians of the ’60s and ’70s and ’80s and ever since have been lured by that same “bad boy” attraction of not just socially acceptable (but addictive) alcohol or relatively benign temptations like marijuana but more sketchy drugs like cocaine, acid, PCP, meth and heroin.  Some dabbled in them and moved on.  Others got hopelessly caught up in them and ruined their careers, their families, their lives.

Some fans have tended to minimize the wreckage by pointing out that these people made some really great music before succumbing to excess.  And they’re right:  Brian Jones, Jimi Hendrix, Janis Joplin, Jim Morrison, Gram Parsons, Elvis Presley, Lowell George, Bon Scott, John Bonham and dozens of others made some fantastic, lasting songs on their way to permanent self-destruction.

But many great musicians had the wherewithal and the restraint to experiment and see where it took them, then saw the folly of the long-term use, and dialed it way back or quit entirely.  George Harrison famously took LSD in 1966-67 but then swore it off after only a year or two. Brian Wilson, Stevie Nicks, even drug poster boy Keith Richards have pulled themselves back from the abyss and are still here, writing, recording and performing.

Some, of course, wanted to quit and couldn’t.  Many drugs, after all, are ruthlessly addictive, and many people are pretty much helpless to fight the urge to use, especially if you have the money and fame and are surrounded by people who have it and offer it on a daily basis.

So Weiland’s death should be just another in a long line of rock ‘n roll drug casualties.  But what makes his different is that, only a couple of days after he died, his ex-wife and mother of his two children wrote an astonishingly candid piece for Rolling Stone which pleaded, “Don’t glorify this tragedy.”  Rebecca Weiland Forster, who was his wife from 2000-2007, took Weiland to task for being a total deadbeat of a father, absent from virtually every aspect of his children’s lives, even as he continued his selfish rock star lifestyle, replete with all its downward-spiral crack cocaine abuse, utter negligence and lack of personal responsibility.

“At some point,” she wrote, “someone needs to step up and point out that, yes, this will happen again, because as a society, we almost encourage it.  What actually belongs in a hospital is now considered art…  Our hope for Scott has died, but there is still hope for others.  Don’t glorify this tragedy with talk of rock and roll and the demons that, by the way, don’t have to come with it.”

I realize that, by applauding Forster’s public browbeating, I sound like someone from my parents’ generation, scolding the rock musicians for their hedonism and lack of concern for those who are affected by their self-indulgent ways.  But I’m willing to do so, especially if even someone like David Crosby, who notoriously personified the “if it feels good, do it” philosophy of his time and is on probably his fourth or fifth life, has been open about sharing his warnings regarding the consequences of “no limits.”

“I shouldn’t be here,” said the veteran of The Byrds and Crosby, Stills, Nash & Young.  “I’m a very lucky cat.  I had to lose my friends and go to a Texas prison before I figured out I couldn’t keep doing this any more.”

Here’s what Richards had to say back in 1977:  “I can’t live without being on the road.  Every minute spent off the road, I either turn into an alcoholic or a junkie ’cause I’ve got nothing else to do.  I mean, most people that do things at least have the opportunity of doing them pretty regularly.  We’re in this unique position…of having these horrible extravagances where we can say, ‘I don’t want to work this year.'”

Jerry Martini, saxophonist with Sly and the Family Stone, watched his band’s leader fall apart due to readily available cocaine.  “It was insane, and in some ways, it still is.  The downfall of some of the most famous bands was often due to the affiliates — the hangers-on, the dealers, the doctors, the managers.  One of the presidents of a very large label probably had the biggest coke habit I knew of.  Our roadies had instructions to leave lines of blow on our amps so we could go back and bend over as if we were adjusting knobs, when actually we were secretly snorting in front of a live audience.”

To be sure, there have been many classic, iconic songs through the decades — many of them well beneath popular radar, but some very well known — that have celebrated drugs and alcohol.

It would be inaccurate to say that the harder the rock, the more aggressive the drug use.  While heavy metal, punk, grunge and hard rock bands have had more than their share of heavy users (Ozzy Osbourne, Keith Moon, Sid Vicious), there are plenty of articulate, moderate musicians in those genres who have shunned the drug regimen that’s expected of them (Dave Grohl, the late Frank Zappa, Ian Anderson, to name just a few).

On the flip side, fans are often shocked to learn when the mellower singer-songwriters who offer delightful melodies and sing soothing harmonies nevertheless have their troubles with drug abuse (James Taylor, Nick Drake, Whitney Houston, etc).  It just goes to show that addiction can affect anyone of any gender, color, faith, background or musical leaning.

The lessons — if there are any to learn from Forster’s recent essay, or the excesses of the celebrities we fawn over — would be these:  Be careful.  Everything in moderation.  There are consequences to your actions.  Make use of the talents you were born with.  There’s no glory in dying young.