Upon moving to Santa Monica in 2011, I didn’t have to wait long to find myself driving down streets and highways whose names I recognized from popular songs:

“I flew past LaBrea out to Crescent Heights…I passed her at Doheny and I started to swerve…”  — three major streets in West Hollywood off Sunset Boulevard, made famous in Jan & Dean’s “Dead Man’s Curve.”

“Drive west on Sunset to the sea…” As Sunset reaches the Pacific Coast Highway in the Palisades, from Steely Dan’s “Babylon Sisters.”

“And the sun comes up on Santa Monica Boulevard” from Sheryl Crow’s “All I Wanna Do.”

The same is true, no doubt, for those who move to New York City, or London, or any number of other areas of the country or the world where streets and highways inspire artists to write about them.

I’m sure you’ll agree that driving in your car and hearing a song about driving in your car is always a special treat.  There are hundreds and hundreds of great old tunes about hitting the road, by artists from Eric Clapton to Bruce Springsteen, from Steppenwolf to Jackson Browne, from Joni Mitchell to The Doobie Brothers, among countless others.

Most of these songs feature lyrics that could be on any road anywhere, but but others focus on specific highways, avenues and streets.

Today, let’s shine a light on 15 songs that refer to these roads.  Perhaps you’ve driven down them yourselves, or will someday…

“Highway 61 Revisited,” Bob Dylan (1965).  Regarded by many fans as one of Dylan’s three finest albums, “Highway 61 Revisited” features the titantic “Like a Rolling Stone” and such serious works as “Ballad of a Thin Man,” “Queen Jane Aproximately” and “Desolation Row.”  One of the lighter moments is the breezy bluesy title tune, inspired by U.S. Highway 61, which runs from Louisiana through the Mississippi River valley to Dylan’s home state of Minnesota.  It’s the route followed by many African-Americans as they left the South for jobs and opportunities in the North.

“Toulouse Street,” Doobie Brothers (1972).  One of the better known streets in New Orleans’ famed French Quarter, Toulouse Street is a magical brew of fabulous restaurants, sketchy strip bars, outrageous souvenir shops and mysterious voodoo characters. It inspired this gorgeous acoustic track by the Doobies’ Patrick Simmons on the album of the same name, with lyrics about Creole girls and rooms where “the blood’s a-flowing fast, and spells have been cast.”

“(Get Your Kicks on) Route 66,” Nat King Cole Trio (1946).  A fellow named Bobby Troup wrote this during and after a cross-country trip he made with his wife after World War II, much of it on U.S. Route 66, which runs from Chicago to L.A.  It mentions ten cities encountered along the iconic highway (can you name them?). This R&B standard has been recorded by more than 75 artists over the years, including Chuck Berry, Glenn Frey, The Manhattan Transfer, Brian Setzer Orchestra, Bing Crosby, The Rolling Stones, John Mayer, Brad Paisley, Natalie Cole, Depeche Mode and Perry Como.

“Lake Shore Drive,” Aliotta Haynes Jeremiah (1971).  Those outside the Greater Chicago area may not be familiar with this one, but Windy City music fans have long hailed the irresistible beauty of this catchy, piano-driven ode to the famed roadway that runs along Lake Michigan from the North Shore past the Gold Coast to downtown.  The lyric “Just slipping on by on LSD, Friday night, trouble bound” was thought by some to be an abbreviation not only for the road but the hallucinogenic drug, but composer Skip Haynes insists that drugs have nothing to do with it. 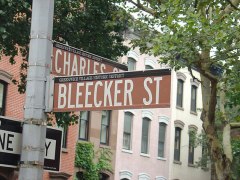 “Bleecker Street,” Simon and Garfunkel (1964).  One of Simon’s first handful of compositions was this quiet song that pays tribute to the reflective moods and quaint coffeehouses found on this New York City artery that slices through the bohemian Greenwich Village area, where folk artists cut their teeth in those days.  It appears on S&G’s largely ignored debut album, “Wednesday Morning 3 A.M.”

“Seven Bridges Road,” The Eagles (1980).  Written in 1969 by Steve Young and named after a road leading out of Montgomery, AL, on which you must cross seven bridges before it ends as a dirt road in the woods.  It had apparently been called that for a century but is now known as Woodley Road.  Arranged in five part-harmony and recorded that way by Ian Matthews in 1973, The Eagles then started opening their concerts with an amazing a cappella version, and included it on their live 1980 LP.

“Penny Lane,”  The Beatles (1967).  To match John Lennon’s childhood remembrance song, “Strawberry Fields Forever,” Paul McCartney came up with this whimsical tune that captured the activities and characters (the banker, the nurse, the barber, the fireman, and others) found in a Liverpool retail area and transit turnaround he fondly recalled from his boyhood days (and still exists today).  This song and its counterpart is generally regarded as the Beatles’ best double A-side single, and one of the best of all time.

“Main Street,” Bob Seger (1976).  Just about every city in America has a Main Street, but this hit song by Seger actually refers to Ann Street, a smaller road just off Main Street in Ann Arbor, Michigan, the home of the University of Michigan.  An underaged Seger used to watch dancing girls in the windows, watch sketchy characters come and go, and listen to the R&B music wafting out from the edgy clubs there, all of which are referred to in the lyrics.

“Creeque Alley,” The Mamas and The Papas (1967).  This autobiographical song by John Phillips tells the story of The Mamas and The Papas — how they met, how they got together, how they became famous, and what was going on with some of their musical contemporaries at the time.  The title, which is never mentioned in the lyrics, refers to Crequi Alley, a tiny lane in the Virgin Islands where Phillips, his new wife Michelle and his first band, The New Journeymen, used to perform in a club there.

“52nd Street,” Billy Joel (1978).  Following the enormous success of “The Stranger” album and its multiple hit singles, Joel took a turn toward jazzier themes (“Zanzibar,” “Stilletto,””Honesty”).  The result was the aptly named “52nd Street,” the street that served as the hotbed of jazz clubs and music in New York City in the ’40s and ’50s, and perhaps not coincidentally, the location of the studio he used to record the album.

“Electric Avenue,” Eddy Grant (1983).  Grant, a respected Guyanese British musician who had been a member of The Equals (“Baby, Come Back”) in the late ’60s and in the forefront of the reggae movement, scored an international #1 hit with this pop-synth dance favorite.  It’s inspired by Electric Avenue, a market street in the Brixton area of London that has always specialized in African, Caribbean, South American and Asian products.  It was the first street in London to be fully lit by electricity. 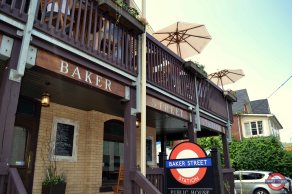 “Baker Street,” Gerry Rafferty (1978).  Rafferty was a member of the early ’70s band Stealers Wheel (“Stuck in the Middle With You”), which dissolved in acrimony and lawsuits.  A resident of Glasgow, Scotland, Rafferty needed temporary lodgings in London while legal matters were being resolved, and he found them at a good friend’s flat on Baker Street, a major avenue in London.  The lyrics tell the story of being depressed about the situation, but culminate at song’s end when things are resolved, with lyrics about “the sun is shining, it’s a new morning.”

“On Broadway,” The Drifters (1963) and George Benson (1978).  The iconic thoroughfare of Broadway, in the heart of Manhattan, one of the world’s top two centers of theater arts, has been the inspiration for numerous movies, plays and songs over the past century.  Many of them focus on the hopes and dreams of aspiring actors and musicians who want nothing more than to become stars there.  The Barry Mann-Cynthia Weil song “On Broadway” does a particularly fine job of this, and it has been recorded by many dozens of artists since its debut in 1963.  The Drifters’ #9 hit and Geoirge Benson’s #7 version  are the most notable.

“Telegraph Road,” Dire Straits (1982).  Singer/guitarist/songwriter Mark Knopfler was on tour in the Midwest U.S. one day on a tour bus, reading a book about the degradation of urban centers.  He noticed that he was on one road, Telegraph Road, for a very long time, and observed how the landscape and development changed dramatically as it headed north from the Ohio border past Detroit into the northern suburbs, and saw a parallel between what he was reading and what he was seeing.  He soon composed a multi-part, 14-minute masterpiece that goes through as many changes as the road he had traveled.

“Shakedown Street,” Grateful Dead (1978).  Not a real street at all, but a term coined by lyricist Robert Hunter in the title song of the album of the same name to describe sketchy urban boulevards where drugs and prostitution reigned and customers were often fleeced.  In more recent years, it has evolved to connote the area in parking lots at Grateful Dead (and other jam band) concerts where vendors sell food, beverages and other wares.