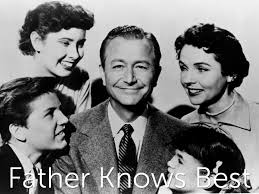 Dear Old Dad.  He just never seems to get the same respect that Mom does.

While Mother’s Day was established as a national holiday by Woodrow Wilson back in 1914, attempts to establish an official Father’s Day were repeatedly rebuked by Congress and others for many decades.  Why, isn’t exactly clear.  Incredibly, it wasn’t until 1966 when Lyndon Johnson finally issued a proclamation designating the third Sunday in June as Father’s Day, “honoring fathers and celebrating fatherhood, paternal bonds, and the influence of fathers in society.”  Well, better late than never, I guess…

In the popular music arena, songwriters seemed to give mothers and fathers equal treatment.  From folk to blues, from R&B to Christian, from funk to ballads, from country to swing, every genre is represented with songs about fathers.  I was chagrined to find, though, that a preponderance of Daddy tunes were about what a deadbeat he was, leaving home, fooling around, drinking too much, and so forth.  Still, there are plenty of songs that praise Pops… if you look hard enough…

Last month, I offered a Spotify playlist of songs with “mother” or “mama” in the title.  Today, I have assembled 15 titles that I think will make a nice mix of songs for you to play when you’re hanging out with Dad this Sunday.  He may say he doesn’t like them, but deep down, I’m betting he’s singing along to some of them (if you can pull his attention away from ESPN for a few minutes…)

In “Father and Son,” the lovely yet powerful call-and-response piece from 1970’s “Tea for the Tillerman,” Stevens creates a somewhat tense dialog between a man and his son, who hold different opinions about life and love.   The father admonishes the boy — “you’re still young, that’s your fault, there’s so much you have to know” — and the son retorts, “How can I try to explain, when I do he turns away again, it’s always been the same old story…”  In the end, they agree the boy must leave home and find his own way:  “Away, away, away, I know I have to make this decision alone…”

One of the most perceptive songwriters of his time, Simon has written lyrics exploring everything from loneliness to jubilation, from troubled water to little towns, from Graceland to Kodachrome.  In the best song from his mostly ignored 2006 album “Surprise,” he serves up the kind of reassurance and affection only a parent can offer to a child:  “I’m gonna watch you shine, gonna watch you grow, gonna paint a sign so you’ll always know, as long as one and one is two, there could never be a father who loved his daughter more than I love you…”

America had already shown its appreciation in the early ’60s for the R&B genre coming from the Motown groups (The Miracles, The Supremes), but with this infectious track, Brown’s first Top Ten hit, the Godfather of Soul offered up a whole different breed of soul music.  Brown wrote the song –perhaps the first funk tune on US charts — about an older man who isn’t shy about strutting his stuff on the dance floor amongst much younger folks:  “Come here sister, Papa’s in the swing, he ain’t too hip now, but I can dig that new breed, baby, he ain’t no drag, Papa’s got a brand new bag…”

Larson’s fine vocal harmonies were first introduced by Neil Young on his “Comes a Time” LP, and her rendition of Young’s song “Lotta Love” was her breakout single, hitting #5 in the spring of ’79.    On her excellent follow-up LP, “In the Nick of Time,” Larson chose to include the 1940s-era Bobby Troup song “Daddy,” made famous by The Andrews Sisters and various orchestras of the time.  Troup, who also wrote “Get Your Kicks on Route 66,” wrote this one about a girl who loves to be pampered:  “Hey Daddy, I want a diamond ring, and bracelets, and everything, hey Daddy, you ought to get the best for me…”

Patricia Clapp was only 16 when she gave birth to her son Eric.  His father, a 25-year-old soldier from Montreal, shipped out before Eric was born, and the two never met.  This song’s lyrics, written by Clapton in 1992 but not released until his 1998 “Pilgrim” LP, speak of his longing for a chance to gaze into his father’s eyes, and also refer to the brief life of Clapton’s own son Conor, who died at age 4.  “I tried to describe the parallel between looking in the eyes of my son, and the eyes of the father I never met, through the chain of our blood,” he wrote in 2007.  A sample:  “Where do I find the words to say, how do I teach him, what do we play, bit by bit, I’ve realized, that’s when I need them, that’s when I need my father’s eyes…”

This tragic song by Norman Whitfield and Barrett Strong tells the tale of a young man talking about the deadbeat father he never knew, who neglected those who loved him most:   “I never got the chance to see him, never heard nothin’ but bad things about him, ‘Momma, I’m depending on you to tell me the truth, Momma just hung her head and said, ‘Papa was a rollin’ stone, wherever he laid his hat was his home, and when he died, all he left us was alone’…” 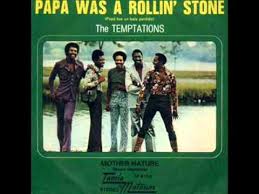 Originally written for The Undisputed Truth as its follow-up to “Smiling Faces Sometimes,” it was instead recorded by The Temptations in a magnificent 12-minute version full of instrumental passages.  It was pared down to 6:45 for the single, which was the group’s final #1 hit.

When Fleetwood Mac was recording the multiplatinum “Rumours” album, drummer Mick Fleetwood was the stable rock in the midst of the band’s two stormy relationships (Buckingham and Nicks as well as the two McVies, John and Christine).  In her own way, Christine McVie was letting Fleetwood know he was the father figure of the group at the time they needed one the most:  “Why are you right when I’m so wrong, I’m so weak but you’re so strong…Oh Daddy, if I could make you see, if there’s been a fool around, it’s got to be me…” 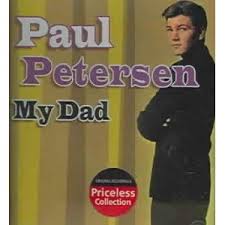 The Donna Reed Show, an early ’60s sitcom starring the Oscar-winning actress as the pleasant, level-headed mom, featured two different episodes in which her fictional children, Mary and Jeff, sang songs at a school dance.  Their real-life counterparts, Shelly Fabares and Paul Petersen, took those songs to Top Five success on the US singles chart. Fabares’ rendition of “Johnny Angel” went all the way to #1 in early ’62.  Petersen, 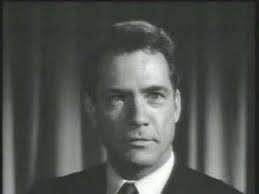 only 17 at the time, followed with the #6 hit “My Dad,” a saccharine ballad written by Brill Building stalwarts Barry Mann and Cynthia Weill expressly for the show episode.  Both the song and lyrics are admittedly pretty shmaltzy (“My dad, now here is the man, to me he is everything strong, no, he can’t do wrong, my Dad, now he understands, when I bring him trouble to share, oh, he’s always there, my Dad…”)  but hey, why not?  It’s for Father’s Day…

Elton John’s lyricist partner, Bernie Taupin, was fascinated by the old American West and its stories of the frontier, as evidenced by the almost country-western feel to the music and words of most of the tracks on their third album, “Tumbleweed Connection.”  Taupin reaches back to the Civil War in “My Father’s Gun,” a slow-building, dramatic tale in which the son buries his soldier father and then vows to keep fighting in his father’s place:  “I’ll not rest until I know the cause is fought and won, from this day on, until I die, I’ll wear my father’s gun…”

For her 11th studio album, “My Tennessee Mountain Home,” Parton recorded a batch of songs she wrote about growing up in rural Tennessee before heading to Nashville for fame and fortune.  The title track was a Top 20 hit on the country charts, but equally poignant was this song that paid tribute to her father and how hard he had to work to support her family during tough times:   “As long as I remember, I remember Daddy workin’, workin’ on the job or either on the farm, trying to provide for the family that he loves, and Daddy’s working boots have taken many steps for us…”

Never one to shy away from provocative topics, Madonna tackled teenage pregnancy and abortion in this #1 hit written by Brian Elliot.  The narrator, who is pregnant and weighing her options, cautiously approaches her father in her hour of need, pleading for loving support and advice rather than lectures and scolding:  “You always taught me right from wrong, I need your help, daddy, please be strong, I may be young at heart, but I know what I’m saying…”

The homesickness for hearth and family that strikes touring musicians is the subject of this autobiographical song from Taylor’s seventh LP, “In the Pocket.”  He calls home from the road and laments the fact that he has more concerts ahead of him before he can be home where he wants to be:  “Daddy’s all gone, he’s only halfway home, he’s holding on to the telephone singing, please, don’t let the show go on…”

One of Collins’s first attempts at composing was this gorgeous piano ballad, written in October 1967 for her blind father, who died only three weeks later.  They both had suffered from depression and alcoholism, and had forged an uneasy bond over their afflictions.  She wrote how he had dreamed of greater things for himself and his family, most of which never came to pass:  “My father always promised us that we would live in France, we’d go boating on the Seine and I would learn to dance, I sail my memories of home like boats across the Seine, and watch the Paris sun set in my father’s eyes again…”

Here’s a funky little blues-based track from Steely Dan’s underrated “Katy Lied” LP.  Creative duo Donald Fagen and Walter Becker chose to use a different guitarist on each of the album’s 10 tracks; this one features the smooth stylings of jazz great Larry Carlton.  The lyrics paint a picture of a typically dark Fagen-Becker character, this time a father figure who’s either drunk or absent most of the time:   “He can’t celebrate Sunday on a Saturday night no more…Daddy don’t drive in that El Dorado no more, he can’t get tight every night, pass out on the ballroom floor…”

The sensitive singer-songwriter from Illinois was well past his commercial peak when he released the criminally overlooked LP “The Wild Places” in 1990.  The album contains some of the best music and most perceptive lyrics of his career, including this bittersweet paean to his Scandinavian and Scottish ancestors and the sacrifices they made:  “And the sons become the fathers, and their daughters will be wives, as the torch is passed from hand to hand and we struggle through our lives, the generations wander but the lineage survives, and all of us, from dust to dust, we all become forefathers by and by…”

And, just to mess with your playlist, the most cringeworthy Father’s Day tune:

This awful song, with its schmaltzy music and melodramatic lyrics, was written by Geoff Stephens and Peter Callender, who were also responsible for the worst song of 1966, “Winchester Cathedral.”  Somehow, Newton’s recording went to #1 in the summer of ’72, telling the tearjerker tale of a father about to walk out on his family until his young daughter comes running after him:  “I knew I had to leave but halfway down that highway, when I turned around I saw my little daughter running after me crying, ‘Daddy, don’t you walk so fast’…”

Lastly, my “honorable mentions” that didn’t make the cut (some because they weren’t available on Spotify!):