There may not be a more frequently explored topic in popular music lyrics than love.  Good or bad, brief or long lasting, love and romance have been mainstays as subject matter for six decades:  “Love Reign O’er Me.”  “Love is the Drug.”  “Love Will Keep Us Together.”  “Love Will Tear Us Apart.”  “Love is a Many Splendored Thing.”  “Love in an Elevator.”  “Love is Like Oxygen.”  “Love You Inside Out.”  “Love Stinks.”

Songs about weddings and marriage, though, are less plentiful, perhaps because the music industry isn’t exactly overflowing with examples of life-long relationships.  Still, year in and year out, music lovers everywhere continue to give the institution of marriage a go, and who doesn’t enjoy the warm, festive nature of a great wedding ceremony and reception?

As with other important milestones in life, weddings need a soundtrack, and popular music once again comes through with enough songs to build a decent set list.  I’ve selected a baker’s dozen tunes to examine below, via Spotify, along with another 15 “honorable mentions” that also focus on weddings.  For the brides and grooms out there, and all those who celebrate their union, this blog’s for you!

In the fall of 1969, Peter Yarrow of Peter, Paul & Mary was planning his wedding and asked compatriot Paul Stookey to write and sing a song for the ceremony.  Stookey, a recently converted Christian, went off to pray for guidance, and both the music and lyrics for “Wedding Song (There is Love)” came forth within the hour:  “He is now to be among you at the calling of your heart, rest assured this troubadour is acting on his part, the union of your spirits here has caused Him to remain, for whenever two or more of you are gathered in His name, there is love…”  Said Stookey, “In the lyrics, I paraphrased a few lines of scripture, specifically Matthew 18:20 and Genesis 2:23, so I felt uncomfortable accepting songwriting credit.”  Instead, he set up the Public Domain Foundation, which has since received songwriting and publishing royalties for charitable distribution.  PP&M broke up in 1970, but Stookey recorded the song in 1971 as a solo artist, and it reached #24 on the US charts.

Jeff Barry and Ellie Greenwich, part of the powerhouse of songwriters that came out of the Brill Building in New York in the early ’60s, wrote a dozen Top Ten hits, including “Then He Kissed Me,” “Da Doo Ron Ron,” “Leader of the Pack,” “Be My Baby,” “Doo Wah Diddy Diddy” and “Hanky Panky.”  Following the first wave of Beatles hits in 1964, a vocal trio called The Dixie Cups had the #1 song in the country with this Barry-Greenwich tribute to wedding ceremonies:  “Today’s the day we’ll say ‘I do,’ and we’ll never be lonely anymore, because we’re going to the chapel, and we’re gonna get married…”

Emerging from the poverty of a depressed upbringing in Cleveland, Chapman went to #1 with her impressive debut in 1988 and has developed a devoted following over the past 20 years and eight albums.  Although she never married and has been ambiguous about her sexual orientation, on her 2000 album “Telling Stories,” she composed “Wedding Song,” a tender examination of the hopes and dreams behind the institution of marriage:  “For you, I don the veil, by your light, others pale by comparison, I place my faith in love, my fate in this communion…”

Sir Paul had been happily married to Linda for 20 years when he was writing the songs that would become the material for “Flowers in the Dirt,” which was sort of a comeback album for him after a few duds in his repertoire.  It did modestly well here, peaking at #17, and his US tour that year helped boost sales of the album, which included “We Got Married,” an ambitious song about the ups and downs of married life from a man who knew all about that:  “I love the things that happen when we start to discover who we are and what we’re living for, just because love was all we ever wanted, it was all we ever had, it’s not just a loving machine, it doesn’t work out if you don’t work at it…”  David Gilmour of Pink Floyd made a guest appearance as lead guitarist on this track.

For his 1980 double album “The River,” Springsteen wrote two hard-luck songs that focus on tying the knot. The title song tells the heartbreaking story of a couple who married young because the girl got pregnant, which felt to the boy like a dead end that forever limited their life choices:  “Then I got Mary pregnant, and man, that was all she wrote…we went down to the courthouse and the judge put it all to rest, no wedding day smiles, no walk down the aisle, no flowers, no wedding dress…”  On the other hand, “I Wanna Marry You” is more hopeful, with lyrics about a man who meets a single mom, and likes and admires her so much that he offers to marry her to ease her burden:  “To say I’ll make your dreams come true would be wrong, but maybe, darlin’, I could help them along, little girl, I wanna marry you…” 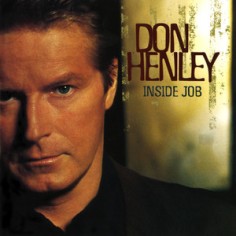 Larry John McNally, a respected songwriter whose work has been recorded by the likes of Bonnie Raitt, Joe Cocker, Rod Stewart and Henley, sang this song at an in-the-round show at the famed Bluebird Cafe in Nashville in 1998.  Henley heard a tape of the performance and so loved the song that he recorded it for his “Inside Job” LP two years later.  McNally talked about the song’s lyrics for the Songfacts website:  “What does it really mean, marriage?  I believe there are misconceptions about what you are entering into, fantasies and delusions sold through movies, songs and advertising.  Nonetheless, there is no denying that faithfulness, loyalty, the depth of human bonding and support for one another through life’s trials and tribulations, these are good things.  That’s what I wanted to write about in this song.”  A sampling:   “To want what we have, to take what we’re given with grace, for these things I pray, on my wedding day…”

In 1983, Elton reunited with Bernie Taupin, his celebrated lyricist from his hugely popular ’70s albums and singles, and the result was the LP “Too Low For Zero,” which spawned “I’m Still Standing” and “I Guess That’s Why They Call It the Blues,” both big hits.  Also on the album was the rollicking “Kiss the Bride,” in which the narrator bemoaned the fact that his love was marrying someone else:  “And when the preacher said, ‘Is there anyone here got a reason why they shouldn’t wed?’, I should’ve stuck up my hand, and this is what I should’ve said, ‘I wanna kiss the bride, yeah, I wanna kiss the bride, yeah, long before she met him, she was mine, mine mine’…” 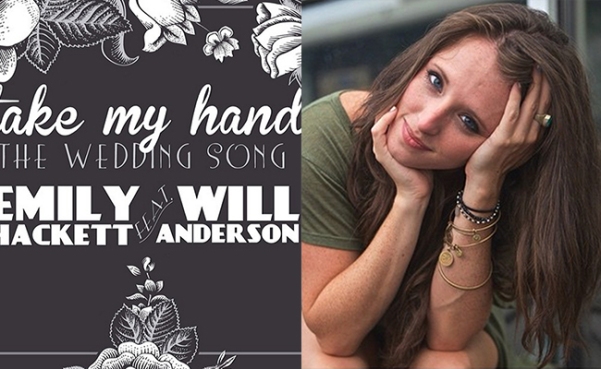 In 2013, Emily’s friends Bobby & Katie asked her to sing at their wedding, anything she wanted.  “I was set on writing something,” she said, “so I sat down with my friend Christian, and we decided to focus on the simplicity of it, the honesty of it, the butterflies, in both the excitement and fear that surface at the idea of becoming one with someone.  It took us a long time to feel like we got that right.  How could it not?  When someone asks you to define love and feelings you have on your wedding day, it’s a very difficult thing to do.  We wanted it to relate to the bride and groom we wrote it for, but we’ve been beside ourselves about how much it relates to so many brides and grooms.  It’s our idea of a perfect snapshot of how you feel on your wedding day.”  Indeed it is:  “So give me your word, and I’ll give you all that I’ve got, no we don’t have much, but it sure feels like a lot, so take my heart and take my hand again and again, right where we stand…”

In the 1940s and ’50s, lyricist Sammy Cahn and composer Jimmy Van Heusen teamed up on more than a dozen songs that earned Oscar nominations and wins, and another couple dozen that rode high on the pop charts.  One of those was Sinatra’s rendition of “Love and Marriage,” a #5 hit in 1955 after its introduction on a TV production of Thornton Wilder’s play “Our Town.”  Cahn’s lyrics make the case (despite plenty of more recent evidence to the contrary) that marriage and love are inseparable:  “Love and marriage, love and marriage go together like a horse and carriage, this I tell ya, brother, you can’t have one without the other…”  The song enjoyed new life as the tongue-in-cheek theme song for the popular TV show “Married…With Children” in the ’80s and ’90s.

Bowie had married in the early ’70s and divorced in 1980, but in 1990, he was introduced to supermodel Iman and as he put it, “I was naming the children the night we met.  It was immediate.”  They married in 1992, and “The Wedding” was the centerpiece of the hugely underrated 1993 LP “Black Tie White Noise,” which opened with an instrumental version and closed with the full version with lyrics:  “Heaven is smiling down, heaven’s girl in a wedding gown, I’m gonna be so good, just like a good boy should, I’m gonna change my ways, angel for life…”

This classic was written in 1966 by songwriter Laura Nyro and recorded by her for her “More Than a New Discovery” debut LP that year.  Three years later, The 5th Dimension — who had already had success with two other Nyro compositions (“Stoned Soul Picnic” and “Sweet Blindness”) — chose to record “Wedding Bell Blues,” which focuses on a woman who badly wants her lover to propose:  “Bill, I love you so, I always will, and in your voice, I hear a choir of carrousels, but am I ever gonna hear my wedding bells?…”  Perhaps not so coincidentally, group members Marilyn McCoo and Billy Davis Jr. were engaged at the time but had yet to set a wedding date.  The song rocketed to #1 in the fall of 1969, and in concerts, McCoo would sing directly to Davis.  They married before the year was out, and recently celebrated their 46th wedding anniversary.

Since forming in San Francisco in the late ’90s, Train has evolved into one of the most popular roots-rock bands of the new millenium, with six Top Ten albums and numerous hit singles (“Drops of Jupiter,” “Calling All Angels,” “Hey Soul Sister”).  Patrick Monahan, the band’s singer and chief songwriter, said “Marry Me” tells the story of a guy who has a “love at first sight” moment when he spies a waitress in a diner, and the music video for the song depicts that fleeting encounter:  “Promise me you’ll always be happy by my side, I promise to sing to you when all the music dies, marry me, today and every day, if I ever get the nerve to say ‘hello’ in this cafe…”

Although he had much bigger hits later in his career (“Eyes Without a Face,” “To Be a Lover”), Billy Idol may be best known for this 1982 song he wrote, which stalled at #36 in the US but made #6 in his native England.  The narrator speaks to a girl who he once loved who had married, apparently unsuccessfully, and now he has returned and hopes she’ll be willing to try again by marrying him:  “Come on, it’s a nice day for a white wedding, it’s a nice day to start again…”  The song’s music video, played heavily at the time on the relatively new MTV channel, was somewhat controversial for its dark gothic images and barbed-wire wedding ring.  The Spotify list includes the longer version (Parts 1 and 2).

Here are a few “honorable mention” tracks having to do with weddings and marriage: