There’s something about the sound of a saxophone that reaches the depths of my soul.

It can be a wonderfully sexy drawl, like the dreamy part you hear in Dire Straits’ “Your Latest Trick” (1985) or Junior Walker and The All-Stars’ “What Does It Take?” (1969)

Or it might be the greasy, frenzied solos that drive the middle break in the Rolling Stones’ “Brown Sugar” (1971) or Little Richard’s “Long Tall Sally” (1956).

For me, the sax has the most uncanny ability to make me stop whatever I’m doing and take a moment to groove to whatever song in which it’s featured.  It comes down to this:  If a song has a sax part in it, it’s better, sometimes way better, than it would be without it.

I mean, seriously.  Imagine Sade’s “Smooth Operator” (1984) without the sultry sax that winds its way through the entire song.  You can’t.

Although the saxophone is perhaps best known for its contributions to jazz music, there’s no question it has made an indelible mark on rock ‘n roll as well.  From the very beginning, sax and rock music have been fast friends, and it’s not hard to see why.

Let’s consider the memorable 1978 hit “Baker Street” by Gerry Rafferty.  The talented singer-songwriter had written a great batch of songs that would comprise what became his #1 LP “City to City.”  It looked like “Baker Street” was shaping up to be the obvious 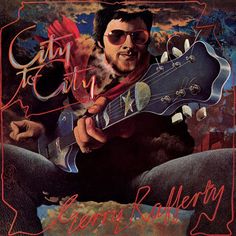 single.  It would be carried by an incredibly mesmerizing guitar riff, repeated throughout the track.

Ah, but here’s where it gets interesting.  The guitar player was a couple hours late to the session, and in the meantime, sax player Raphael Ravenscroft suggested he could take a shot at the guitar part.  Rafferty shrugged and said, “Sure, why not.”  Ravenscroft lifted his sax and leaned into it, and the result sent chills down the spines of everyone in the studio.  The golden riff was clearly a sax part from then on.

We owe a debt of gratitude to Adolphe Sax, a Belgian instrument maker in the 1850s who saw the need for an instrument that would bridge the gap between brass (trumpets, trombones, tubas) and woodwinds (clarinets, oboes, bassoons).  His invention used a single-reed mouthpiece and a series of holes and finger-driven keys, much like the clarinet, but it was made of brass and had a bell-shaped opening that gave it a sound closer to a trumpet or French horn.  He named the instrument after his family moniker,

and came up with multiple versions (sopranino, soprano, tenor, alto, baritone, bass, contrabass) to cover the range of musical notes.

Classical music — concert bands, chamber music, solo recitals, even orchestras — promptly incorporated saxophones into their instrumental mix, as did military and marching bands.  But it was the jazz combos and big bands that dominated the popular music charts in the ’20s and ’30s that truly embraced the saxophone and its potential to grab listeners emotionally.

By the 1940’s the saxophone was a well established and very popular instrument in both classical and jazz music. As the 40’s and ’50s brought more musical styles like jump blues, rhythm and blues and rock and roll, the instrument would become even more important and play a major role in the new sound. 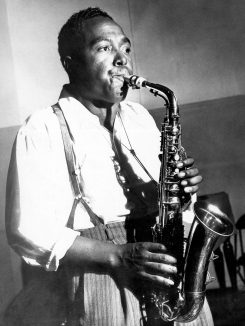 Charlie Parker started playing as a boy, when his mother gave him a saxophone to cheer him up after his father left. He went on to spearhead a musical revolution.

Charlie Parker is regarded as the first true pioneer of the sax, responsible for the development of bebop, characterized by fast tempos and virtuoso techniques.  He was only 34 when he died in 1955, but his influence has lived on ever since, and sax greats from John Coltrane to Kenny G have praised his groundbreaking work.

In the ’50s, the sax was prominent.  Consider songs like The Champs’ “Tequila,”  Big Jay MacNeely’s “Nervous Man Nervous” and Bill Haley and The Comets’ iconic “Rock Around the Clock” — they offered definitive proof, and then some, of how the saxophone could dominate a great rock and roll song.

This continued into the early ’60s, with tracks like Duane Eddy’s take on the fabulous “Peter Gunn” theme (by Henry Mancini, who also wrote the “Pink Panther” theme, also carried by saxophone), Darlene Love’s “Today I Met the Boy I’m Gonna Marry” and Dion’s “Runaround Sue,” featuring raging sax solos that lifted them to a higher plane.

Curtis Amy performing with The Doors

Sixties classics like Sam the Sham and The Pharaohs’ “Wooly Bully” and Junior Walker’s “Shotgun” probably wouldn’t have been the hits they became without the amazing sax riffs that played such an integral part in their arrangements.  Even The Doors, who weren’t known for using brass or woodwinds on their recordings, used both in an exciting way on their 1969 hit “Touch Me,” featuring Curtis Amy, a longtime collaborator with Ray Charles.

Motown and Stax Records were huge proponents of using sax solos in the mix of many of the biggest soul hits of the era:  The Temptations’ “Ain’t Too Proud to Beg,” Aretha Franklin’s “Respect,” The Supremes’ “Baby Love” and The Four Tops’ “I Can’t Help Myself,” to name just a few. 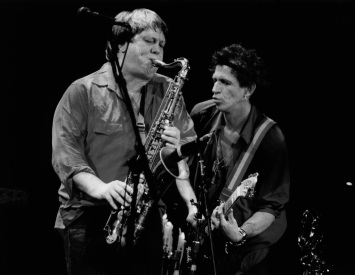 The Beach Boys, The Beatles and the British Invasion bands didn’t seem to be too interested in incorporating sax into their arrangements, with minor exceptions like “Lady Madonna” (check out the alternate mix on “The Beatles Anthology 2” in particular).  The Stones turned out to be big sax devotees, prominently showing off the great Bobby Keys on their “Sticky Fingers” and Exile on Main Street” albums (“Bitch,” “Can’t You Hear Me Knockin’“), and, in the ’80s, with Sonny Rollins guesting on tracks on the “Tattoo You” LP (“Slave,” “Waiting on a Friend“).

The dense, keyboard-heavy progressive rock genre could never make room for sax, could it?  Well, yes, it could:  Check out the Ian McDonald sax solo in King Crimson’s “20th Century Schizoid Man” (1969), and you can’t overlook the phenomenal sax by Richard

The rise of the singer-songwriter era in the early ’70s (James Taylor, Carole King, Jackson Browne) brought the opportunity for delicate sax solos that would embellish their mellower work.  Check out the amazing sax fills by Michael Brecker and David Sanborn on Taylor tracks like “Don’t Let Me Be Lonely Tonight” (1973) and “You Make It Easy” (1975). 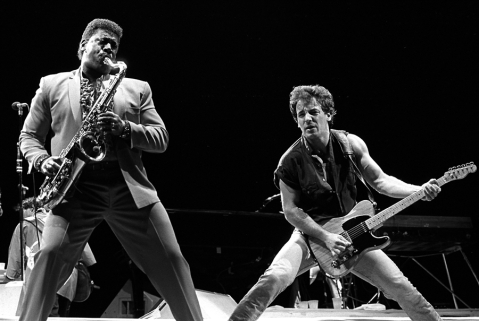 Sax and rock had a major wedding when Bruce Springsteen and The E Street Band showed up in 1973.  The musical and physical presence of Clarence Clemons (immortalized on the 1975 album cover of “Born to Run”) brought saxophone to the forefront, showing vividly how sax riffs could lift a regular song to supersonic levels (“Born to Run,” “Badlands,” “Prove It All Night, “Rosalita” and so many others, especially Clarence’s tour-de-force, “Jungleland“).

“I wanted an electric train for Christmas but I got a saxophone instead.  Glad it worked out that way.”  — Clarence Clemons

Some of the best saxophone players of all made time for guest appearances on the works of some of rock’s most esteemed composers.  Wayne Shorter played amazing solos on the title track of Steely Dan’s “Aja” (1977) and Don Henley’s brilliant “The End of The Innocence,” (1989) and when Joni Mitchell won a Grammy for her 1994 LP, “Turbulent Indigo,” it’s no coincidence that Shorter appears on half of the songs.

Meanwhile back in the Seventies, there were sax-heavy tracks like Traffic’s “Freedom Rider” (1970) and “Low Spark of High Heeled Boys,” (1972) and “Jive, Jive, Jive” from

Edgar Winters’ White Trash (1971).   When the late Gregg Allman chose to release a solo disc (“Laid Back,” 1973) in the midst of The Allman Brothers’ chart success, the best track on the album, “Queen of Hearts,” included a magnificent tenor sax solo by the great David “Fathead” Newman, former sideman to Ray Charles.

“The ’70s and ’80s were awash with great tracks that featured sax:   David Bowie (“Young Americans” and “Modern Love“), Al Stewart (“Year of the Cat” and “Song on the Radio“), Men at Work (“Who Can It Be Now“), Boz Scaggs (“Georgia“), Kenny Loggins (“Whenever I Call You Friend“), Alicia Bridges (“I Love the Nightlife“), Sting (“Fortress Around Your Heart“), Bob Seger (“Old Time Rock ‘n Roll“), Whitney Houston (“I Will Always Love You“), Huey Lewis and The News (“I Want a New Drug“), John Lennon (“Whatever Gets You Through the Night“), Supertramp (“The Logical Song“), Tina Turner (“Private Dancer“), Spandau Ballet (True“),  The Doobie Brothers (“One Step Closer“), Poco (“Heart of the Night“).

Pete Christlieb, the sax player in Johnny Carson’s “Tonight Show” band, was the anonymous (not any more) musician who played the fine sax part on “Deacon Blues,”

the Steely Dan track that celebrates saxophone parts above all others: “I’ll learn to work the  saxophone, I’ll play just what I feel…”  Christlieb recalls the recording session:  “I cut that part in two takes, and I was out of there in maybe a half hour.  Next thing I know, I’m hearing myself in every airport bathroom in the world.”  Christleib also played the great solo in Steely Dan’s “FM (No Static at All)” (1978) and Natalie Cole’s Grammy-winning “Unforgettable“… (1991). 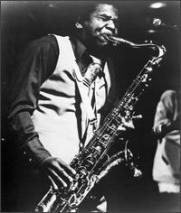 Let’s not forget the very sexy sax riff that made Wham!’s “Careless Whisper” (1985) such a crowd pleaser.  And most of the reason Foreigner’s “Urgent” (1981) was such a big hit was thanks to Junior Walker’s killer guest sax solo.  R&B aficionados Daryl Hall and John Oates were also big fans of sax in their arrangements, and they used it to great effect in their early ’80s hits “Maneater” (1983) and “I Can’t Go For That (No Can Do)” (1981).

The easy-listening side of the pop music spectrum was smitten with sax sounds as well.  Listen to The Carpenters’ “Rainy Days and Mondays” (1971) and, especially, Barry Manilow’s workout with Stan Getz on “Summertime” (1987), and you’ll see how sax solos gave the songs the special ingredient they needed.

was often the key figure in the whole mix:  “Lift me, won’t you lift me above the old routine, make it nice, play it clean, jazzman… When the jazzman’s testifying, a faithless man believes, he can sing you into paradise or bring you to your knees, it’s a gospel kind of feeling, a touch of Georgia slide, a song of pure revival and a style that’s sanctified, jazzman, take my blues away, make my pain there same as yours with every change you play, oh jazzman…”