What comes to mind when you think of rock music lyrics?

Getting high?  “We’re gonna lay around the shanty, mama, and put a good buzz on…”

The weekend?  “Monday I got Friday on my mind…”

Basic philosophy?  “You can’t always get what you want…”

What about love and romance?  Well, of course.  But far too often, the songs seem to center on heartbreak and unrequited love.

Just in time for Valentine’s Day, I’ve collected a baker’s dozen of great love songs from years gone by that you and your loved one can sing to each other.  A Spotify playlist below will help you recall the words and melody in case you’ve forgotten them.  Enjoy! 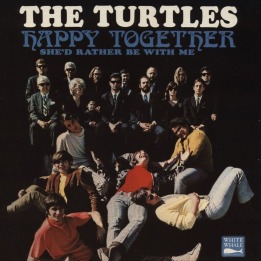 One of the most joyous, infectious tunes of the 1960s, in my opinion, is this irresistible song by The Turtles, the L.A.-based group fronted by Howard Kaylan and Mark Volman (later known as Flo & Eddie).  The team of Alan Gordon and Garry Bonner wrote “Happy Together” expressly for The Turtles, who took it to #1 in the spring of 1967.  It’s one of the Top Ten most-played songs on the radio in the past 50 years:  “I can’t see me loving nobody but you for all my life, when you’re with me, baby, the skies will be blue for all my life, me and you, and you and me, no matter how they toss the dice, it had to be, the only one for me is you, and you for me, so happy together…”

Joni’s songwriting skills are widely known, but in her later years, she has shown a fine ability to interpret the works of others.  On “Both Sides Now,” a collection of standards that follow a romantic relationship from early infatuation to painful denouement, her time-worn voice poignantly covers such classics as the 1933 chestnut “You’re My Thrill,” first popularized by Billie Holiday.   Remember the exhilaration of new love?  “You’re my thrill, you do something to me, you send chills right through me when I look at you, ’cause you’re my thrill…”

Mack Gordon and Harry Warren wrote this classic in 1941 for the Glenn Miller film “Orchestral Wives,” which flopped at the box office.  It languished for nearly 20 years before blues singer Etta James cut her smoldering rendition and made it the signature song of her impressive career.  I still hear “At Last” at weddings when the happy couple takes their “first dance” as husband and wife:   “I found a thrill to press my cheek to, a thrill that I had never known, you smiled, and then the spell was cast, and here we are in Heaven, for you are mine at last…” 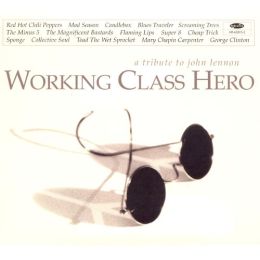 The late great John Lennon was known mostly as an iconoclastic rocker, from his lusty rendition of “Twist and Shout” to the strident “Revolution” and much of his solo catalog, but wow, he could sure write some beautiful ballads as well — “In My Life,” “Imagine,” “Beautiful Boy,” to name just a few.  In the months before he was killed, he wrote several dozen songs, many of which, sadly, were recorded only in demo form.  The best of these is “Grow Old With Me,” which he intended to be, in his words, “a new standard to be played at 50th anniversaries.”  Mary Chapin Carpenter, among others, resurrected the song and offered beautiful treatment of a real gem:  “Grow old along with me, two branches of one tree, face the setting sun, when the day is done, God bless our love, God bless our love, spending our lives together, man and wife together, world without end, world without end…” 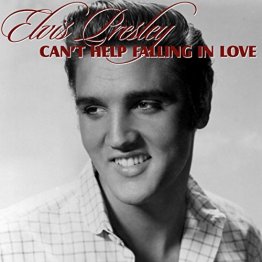 Hugo Peretti and Luigi Creatore, seasoned New York songwriters on their own, were commissioned to team up to create a song for Elvis in 1961.  Little did they know it would be not only the best-selling song of 1962, but it also reached the top of the charts a second time three decades later in a rendition by reggae group UB40:  “Like a river flows surely to the sea, darling, so it goes, some things were meant to be, take my hand, take my whole life too, for I can’t help falling in love with you…”

Although this upbeat track became one of Stevie Wonder’s best loved among his early works, it was actually recorded first by The Temptation and The Four Tops, but their versions went nowhere.  Wonder’s televised performance of the song on “Ed Sullivan” included an electrifying harmonica solo that took it to another level:  “For once in my life, I have someone who needs me, someone I’ve needed so long, for once unafraid, I can go where life leads me, somehow I know I’ll be strong…”

The Brothers Gibb were writing and recording songs for their next album when producer Robert Stigwood asked them to contribute songs for the soundtrack of a movie he was producing about the disco dance culture.  They offered three dance tracks — “More Than a Woman,” Night Fever” and “Stayin’ Alive” — and this shimmering ballad, and they ended up as the anchor songs on the most successful movie soundtrack of all time, “Saturday Night Fever.”  Barry Gibb had emerged as the primary lead singer of the trio by then, much to the disgruntlement of Maurice and Robin.  But all three have said this was their favorite from the LP:  “I believe in you, you know the door to my very soul, you’re the light in my deepest, darkest hour, you’re my savior when I fall, and you may not think I care for you, when you know down inside that I really do, and it’s me you need to show, how deep is your love…”

“Van the Man” is still touring and just released his 51st (!) album, still chock full of jump blues and Irish soul.  In his early years, he was infatuated with poetic imagery (his “Astral Week” LP) and jazzy ballads like “Moondance” and “Tupelo Honey.”  On the “Moondance” LP, he offered a couple of timeless love songs, the best of which is “Crazy Love”:   “And when I’m returning from so far away, she gives me some sweet lovin’ to brighten up my day, yes it makes me righteous, yes it makes me feel whole, yes it makes me mellow down into my soul, she give me love, love, love, love, crazy love…”

Taylor has written plenty about love, though mostly wistful tunes about heartbreak.  Every so often, he finds himself in a good enough mood to write a happy love song like “Your Smiling Face,” or cover a familiar one like “How Sweet It Is (To Be Loved By You).”  Also worthy of your attention is a little-known track from his 1985 LP “That’s Why I’m Here” called “Only One,” which features harmonies by Joni Mitchell:  “You are my only one, you are my only one, don’t be leaving me now, believe in me now, well, I’m telling you now, now you’re my only one…”

The celebrated White Album showed that The Beatles embraced, and could convincingly perform, a wide variety of musical genres:  blues, country-western, folk, dance-hall, avant-garde, you name it.  Their repertoire also had plenty of love songs, and although both Lennon and Harrison each wrote a few, it was usually McCartney who handled this assignment:  “P.S. I Love You,” “And I Love Her,” “Here, There and Everywhere”… and from The White Album, there’s the short-and-sweet “I Will”:   “Love you forever and forever, love you with all my heart, love you whenever we’re together, love you when we’re apart…” 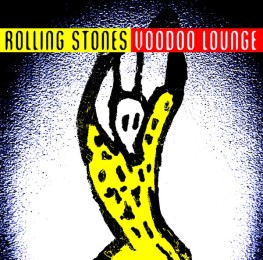 “Sweethearts Together,” The Rolling Stones, 1994

There are precious few songs in the voluminous catalog written by Mick Jagger and Keith Richards that would qualify as romantic, but there are exceptions (“As Tears Go By,” “Wild Horses,” “Angie”).  Much later in their career arc, The Glimmer Twins surprised us by offering their prettiest ballad yet, “Sweethearts Together,” a tender ode to eternal love.  This one is a delightful break from their usual badass rock stance:  “Sweethearts together, we’ve only just begun, sweethearts together, so glad I found someone, sweethearts forever, two hearts together as one…”

Ol’ Blue Eyes was known for many great romantic songs in the American songbook, and one of the better ones was this beauty, written in 1959 by Cy Coleman and lyricist Carolyn Leigh.  The songwriters first gave it to the young Tony Bennett, who recorded a decent version, but Sinatra’s 1964 recording backed by the Count Basie Orchestra remains the definitive rendition.  The lyrics celebrate newfound love while positively looking forward to even greater things:  “Out of the tree of life, I just picked me a plum, you came along and everything’s starting to hum, still, it’s a real good bet, the best is yet to come…”

Ever since he first showed up on our radar in 1970 as the talented backup guitarist on Neil Young’s “After the Gold Rush” album, Nils Lofgren has quietly established himself as a force to be reckoned with.  He emerged as a remarkable songwriter and vocalist, although it was his guitar skills that took him to loftier heights as a member of Bruce Springsteen’s E Street Band.  On his 1991 LP “Silver Lining,” Lofgren showed his sweet side with the romantic “Valentine”:  “Our differences are part of life, still, love will pass the test of time, I want you every day and night, girl, won’t you be my valentine?…”