For me, experiencing live music has always been one of life’s best pleasures.

Truth be told, I think I love it best when it’s in a small, intimate club, performed in front of an attentive, appreciative audience.  It might be a quiet folk artist, alone at the piano or on guitar, or it could be a spirited blues band, settling into a fine groove.

Then again, hearing live music under the stars on a pleasant summer evening can be 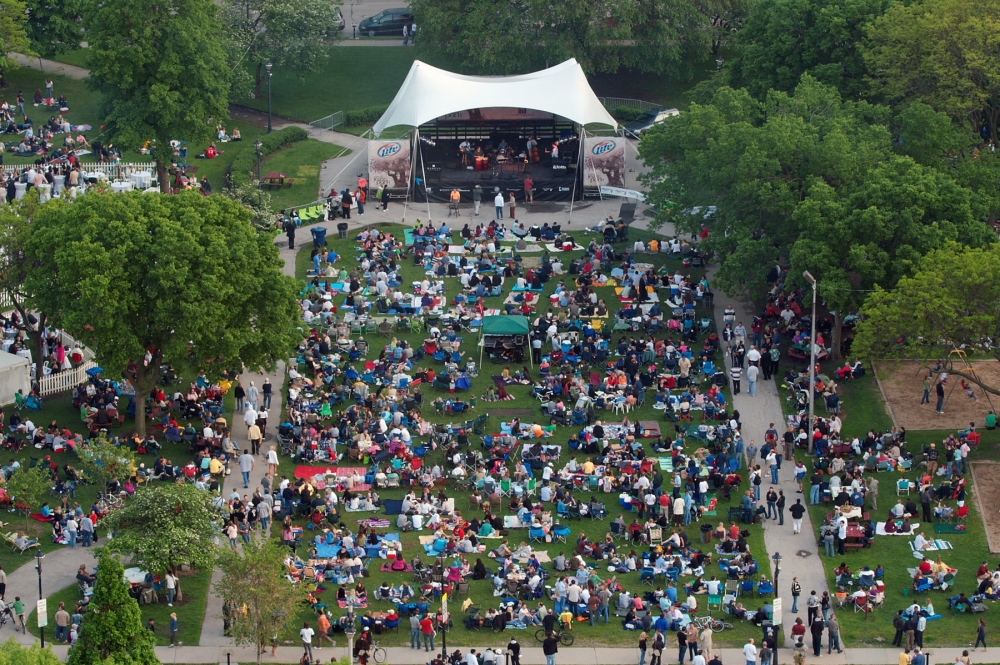 pretty sweet as well.  Assuming the venue has decent acoustics, there’s something about hearing music outside, particularly if you’re sitting back in lawn chairs with friends.  It’s somehow a more memorable experience.

Now that it’s summertime, thousands of music lovers are flocking to the many dozens of outdoor amphitheaters found in or near just about every city in the nation.  I was surprised to learn from a Google list of U.S. outdoor venues that there are more than 230 “amphitheaters” which can handle crowds ranging from a few hundred seats to more than 30,000.  Some of these are coming up on a century of existence; others have opened just within the last ten years.

With the summer solstice approaching, this seems like an apt time to take a look at some of these outdoor venues, whose schedules typically run from May to September.  Blossom may be celebrating a half-century of existence, but there are at least a dozen other popular outdoor concert sites with histories dating back to the 1930s or ’40s.

First I’d like to mention the amphitheaters I’ve patronized in the past, and then also the ones cited in various polls as among the most popular, either with the artists who play there, or the patrons who visit them, or usually both.  No doubt I’m leaving out some notable facilities, but I feel safe in deferring to the artists and industry folks who know about acoustics and ambience, and what makes a great concert experience.

anniversary of Blossom Music Center, the idyllic outdoor venue nestled in the Cuyahoga Valley 25 miles south of my home town of Cleveland, Ohio.  Built in 1967-68 as the summer home of the world-renowned Cleveland Orchestra, Blossom quickly became an essential part of every summer for Northeast Ohio music fans.

Throughout the ’70s and ’80s and into the ’90s, I attended a LOT of shows there.  In the early ’80s, when I was reviewing concerts for a local newspaper, I went to about 25 Blossom gigs each year.  These were all popular music artists, some of them fantastic double bills:  James Taylor with Linda Ronstadt, The Doobie Brothers with Heart, Hall & Oates with Kenny Loggins, Boz Scaggs with Southside Johnny.  And the variety was impressive: Peter Paul & Mary, Marshall Tucker Band, Santana, The Allman Brothers,

As with most similar venues, I suppose, I remember there being two different ways to enjoy a concert at Blossom.  If you sat in seats under the amphitheater roof, you could see the show and enjoy great acoustics.  If you sat on the lawn, you couldn’t see much of anything, and the sound varied from OK to abysmal, depending on the artist, the crowd behavior, and the year we’re talking about.  The tickets were priced accordingly, and those on the lawn knew they were there for the fun of it more than a quality listening experience.

Cleveland Orchestra concerts, of course, were an entirely different animal.  People behaved and were respectful of the musicians performing.  Even on the lawn, the sound 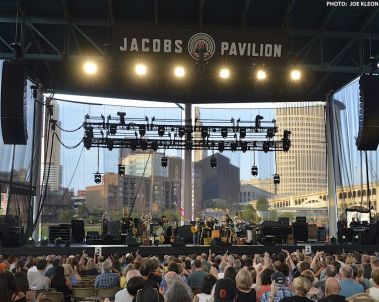 ……Also of interest in the Cleveland market is Jacobs Pavilion, formerly Nautica Stage upon its opening in 1987.  It holds just 5,000 concertgoers and sits directly on the banks of the Cuyahoga River in The Flats entertainment district in downtown Cleveland.  The most notable characteristic is the stark urban/industrial backdrop.  I recall it being a very jaw-dropping moment when an enormous Great Lakes freighter glided by on the river behind the stage during a performance!

During my 17 years living in the Atlanta area, I saw several shows (James Taylor, Steely 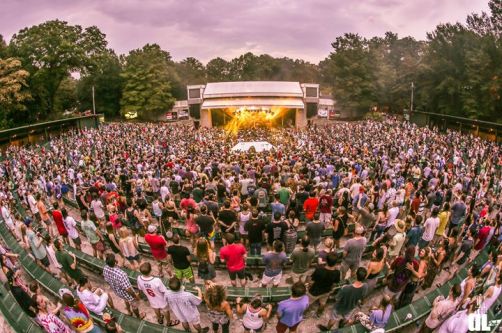 Dan, Jethro Tull, the Atlanta Symphony Orchestra) at this charming venue, located in Chastain Park, just north of the Buckhead area of Atlanta.  The facility holds 7,000, mostly reserved seating, with limited general admission lawn seating.  For most shows, there are tables arranged in the front half of the seating area, approximating a large cabaret/club environment, and patrons are invited to bring their own food and beverages.  The big drawback here is this invites conversation and milling about, which often can distract from the performances on stage.

New to Greater Atlanta since 2008 is Verizon Wireless Amphitheater in the northern suburb of Alpharetta.  It seats 12,000 and hosts mostly popular music performers.

In 1922, this historic amphitheater was carved into a concave hillside in the Hollywood

Hills, just a short walk from the bustle of Hollywood Boulevard.  Its distinctive band shell of concentric arches has undergone numerous upgrades through the years to improve acoustics, made difficult by the venue’s sometimes disruptive urban setting.  It now boasts state-of-the-art sound projection and fidelity, with a seating capacity of 17,500, and artists playing rock, pop, jazz and classical genres perform as part of a lengthy annual season, thanks to Southern California’s temperate climate.  The Beatles recorded their famous “At the Hollywood Bowl” LP there in 1964-65, as did The Doors in 1968.  The Bowl has been featured in dozens of films and TV programs as well.  I’ve seen an excellent double bill there of Sting and Peter Gabriel, as well as shows by James Taylor, Paul Simon and Fleetwood Mac.

L.A. music lovers are fortunate to have two historic outdoor venues located within a few

miles of each other.  The Greek Theatre, part of the master plan for Griffith Park envisioned by its founder in 1898, was completed in 1930, also in a natural canyon setting.  It was rarely used in its first two decades and then underwent significant upgrades in the 1960s.  Since the ’70s, The Greek, which seats a more intimate 5,800, is hugely popular as a venue for concerts, stage shows and even high school graduations.  I’ve been just once, for a Doobie Brothers gig in 2014. 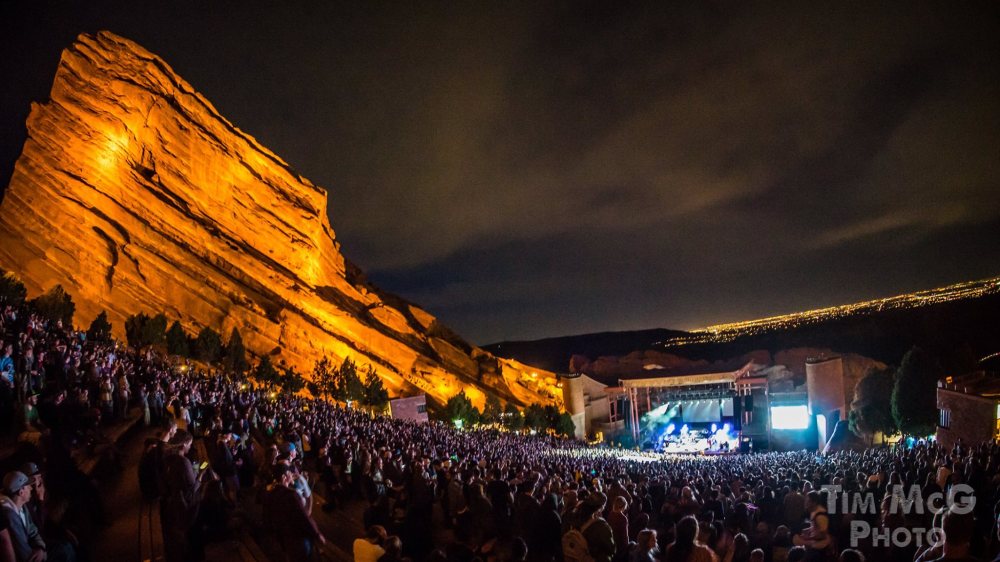 back to Pre-Cambrian times, which gives the place an almost sacred feel to it.  Many performers have selected it as the finest outdoor venue they’ve ever played because of its superb acoustics, its natural beauty and its storied past.  First used for ceremonial events by the Ute tribe in the 1700s, Red Rocks became a primitive concert site as early as 1910, using a temporary platform and rough wooden benches.  The modern amphitheater, built in 1936 and opened in 1941, currently seats 9,500.  Its first rock concert featured The Beatles in 1964, and the visual uniqueness of the setting have made it a popular venue in recent years for live recordings (CD/DVD) by such groups as U2, Blues Traveler, The Moody Blues and Dave Matthews Band.

You read that right:  This very cool venue is located in George, Washington, roughly 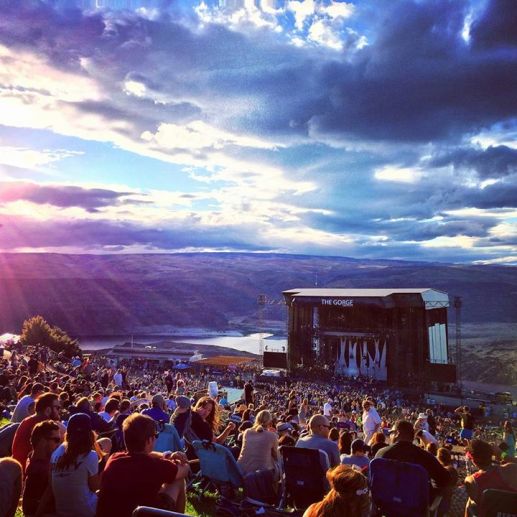 halfway between Seattle and Spokane in the Columbia River Valley.  With its spectacular views of Columbia Gorge Canyon, The Gorge is widely praised as one of the most scenic outdoor venues in the world.  It’s also one of the newer sites on this list, opening in 1985, and seats 27,500, ranking it among the largest.  It’s pretty damn remote, but that doesn’t seem to stop people from converging on the venue every summer, thanks in part to spacious campgrounds nearby.

Nestled in the Berkshire Hills between the towns of Lenox and Stockbridge, Tanglewood

is actually a musical arts center with three music schools as well as “The Shed,” the 5,000-seat amphitheater.  Broad lawns provide ample seating for thousands more, with sweeping views of Monument Mountain in the distance.  It opened in 1938 as the summer home of the Boston Symphony Orchestra and has been offering classical, jazz, pop and rock concerts for 80 years now.  Massachusetts resident James Taylor has played Tanglewood nearly every year for more than 40 years.

Opened in 1952 in Jones Beach State Park near Wantagh, NY, this amphitheater was 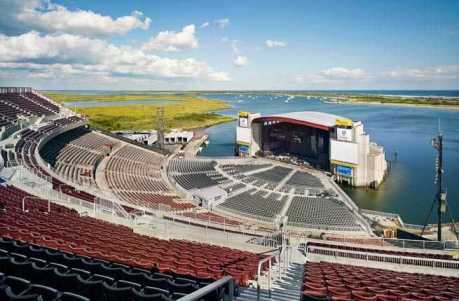 originally situated in Zachs Bay with a moat in front and the Atlantic in the distance, and performers were transported to the stage via boat.  It had 8,200 seats and generally staged musicals for its first 30 years.  By the 1980s, the moat was filled in to provide closer seating, capacity was increased to 15,000, and concerts became the bulk of its schedule.  It is currently undergoing a huge renovation.

Situated in the heart of The Colorado Rockies, Telluride is a famous skiing destination in 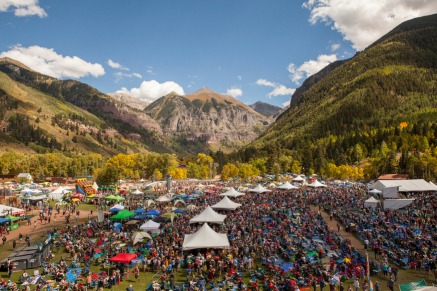 winter and plays host to numerous music festivals in the summer months at the Town Park.  Heralded for its magnificent mountain backdrops, Telluride is a tiny town, but the park’s world-class music events put it on many artists’ “favorite venue” lists.  Annual bluegrass, folk and country music lineups are eager to perform in this amazing mountain valley setting.

The newest venue on the list is Ascend Amphitheater, located on the banks of the

Cumberland River in downtown Nashville.  Country star Eric Church played the opening gig in July 2015, and major acts from Train and Neil Young to Widespread Panic and John Legend have performed there.  The facility offers 2,300 fixed seats, 4,500 lawn seating and an amazing view of the Nashville skyline behind the modern, angular stage.

Despite its rocky past, Merriweather Post Pavilion (capacity 19,300) ranked in Rolling

Stone Magazine’s top ten outdoor venues in a 2013 poll.  It’s also 50 years old (actually 51) this year, and has braved a roof collapse, appearances by controversial political candidates, and rock concert gate-crashers during its history.  But it soldiers on within Symphony Woods, a 40-acre plot of parkland within the planned community of Columbia, Maryland, outside Baltimore.