I’ve written before about album cover art — its beauty, its creativity, its shock value, its lasting durability.  Indeed, the covers of The Beatles’ “Abbey Road” and The Rolling Stones’ “Sticky Fingers” are almost as memorable as the music inside.

In the 1980s, for a relatively short period, there was a new option for rock music buyers: 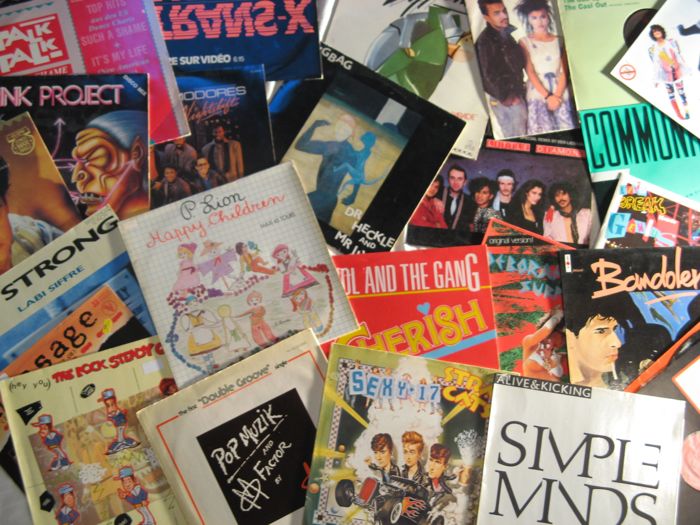 the 12-inch single.  Many songs were released not only as traditional 7″ 45-rpm singles but also in a 12″ 33-1/3-rpm format, often containing several different mixes and extended versions of the song (ideal for use in dance clubs).

These products offered another great opportunity for the designers, photographers and art directors, who had been using album covers from the late ’60s and throughout the ’70s to stretch their wings and create arresting visuals as companions for the music.  Now, they could pour their energies into additional projects to help promote specific songs with still more eye-catching images.

Album cover art has endured for decades, even in its ineffectively smaller canvas on the front of CDs.  The artwork created for these 1980s 12″ singles, however, had a relatively short shelf life.  Unless you were a collector of this format (and not many 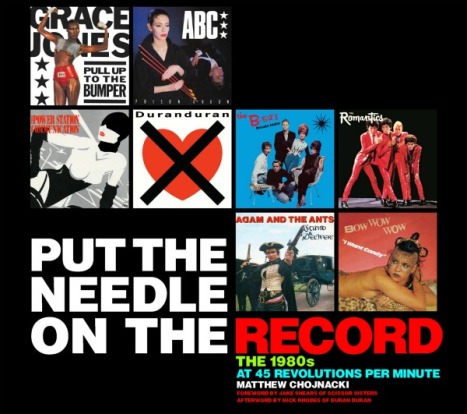 consumers were), the single and its covers would be pulled from distribution once the song had completed its cycle of rising up and down the charts — probably six months at most.

I was recently gifted a fun coffee-table book called “Put the Needle on the Record” by Matthew Chojnacki, which is a collection of  250 examples of the artwork made for the 12″ singles of the Eighties.  There is some imaginative, startling stuff here that I think is worth sharing, because it doesn’t seem to be available anywhere else.

Some artwork will look familiar because it borrows from the art of the accompanying album from which the single was pulled.  Some will be unfamiliar because the art has nothing to do with the art from the album cover.  And others will appear totally foreign to you because you’re unfamiliar with the group or artist.  All are, without question, products of the times — the MTV era, the big-hair era, the pretentious fashion era, the pre-PC era.

The book’s author has some interesting things to say about that period.  “It wasn’t just about the music; it was also about the art of the music.  What we saw was nearly as important as what we listened to.  Record sleeves and music videos inspired new and dramatic looks for our self-expressive Me Generation.  Music, lyrics, and fashion, together, revealed who we were or who we wanted to be.”

Below I’ve selected 20 of my favorites (the artwork, not necessarily the music) from the book, a cross-section of the kind of art forms, graphic designs and type faces that dominated the decade. 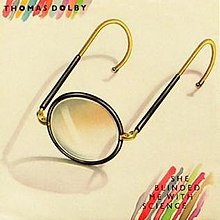 Dolby was a nerdy-looking genius who collaborated with photographer Andrew Douglas on the art for his “She Blinded Me With Science” hit single.  “Douglas had an archive of clippings from the early 20th Century, one of which showed an odd horn-rimmed spectacle with a single lens,” he recalled.  “We merged the idea with a photo of the specs I wore at the time.  My imagination muses about the strange mutant who might wear such an item.” 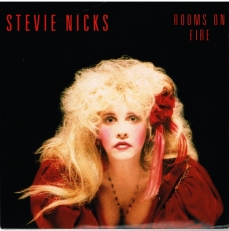 Big poofy hair styles were the order of the day during the ’80s, not only for women but many men in “hair bands” as well.  Stevie Nicks’ hair was never quite as big as it appeared here on the cover of her 1989 single, “Rooms on Fire,” the successful hit from her album that year, “The Other Side of the Mirror,” which had similar cover artwork.  Note the huge poofy shoulder pads as well, another sign of the times. 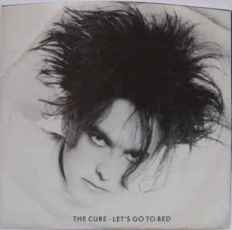 Singer-songwriter-guitarist Robert Smith, who led The Cure from obscurity to great success on the British pop charts in the 1980s, was a leader in another important way:  He was a trailblazer of the “goth” subculture, particularly the look.  The all-black attire, hollowed-out eye makeup and frightening hair, adopted by many disaffected teens in the US and UK alike, is on full display on the 12″ single sleeve for The Cure’s “Let’s Go to Bed.” 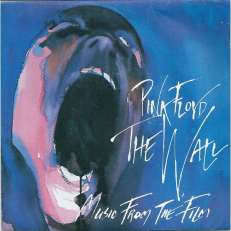 Here’s an example of how the artwork created for related movie promotional posters was re-used on 12″ single sleeves.  Gerald Scarfe, a British artist known for his work in The New Yorker, had created the art on the award-winning cover for Pink Floyd’s “The Wall” LP in 1979, so three years later, for the release of “Pink Floyd — The Wall” movie, he was asked to expand on that visual look with a howling face in the throes of madness, and it was used for the single “When the Tigers Broke Free,” not part of the original LP but included in the film. 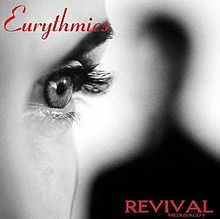 Throughout the ’80s, Eurythmics lead singer Annie Lennox was eager to create stunning visual imagery to go with the group’s innovative music.  “The intimate association between sound and vision can be powerful and profound,” she said.  “Images inform and assist in guiding you to whatever message is contained in the music.”  The intense closeup of Lennox’s eye on the 12-inch single sleeve for “Revival” suggests a much more alluring mood than the stark whiteface used on the companion LP, “We Too Are One.” 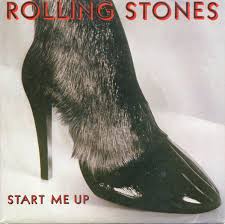 The front and back cover of The Stones’ “Tattoo You” LP in 1981 had mutated treatments of Mick Jagger and Keith Richards, while the inner sleeve featured a bizarre shot of a deer leg wearing a high heeled shoe.  That same photo was lifted for use on the “Start Me Up” 12-inch single, which became a huge dance club hit as well as an international #1 pop hit. 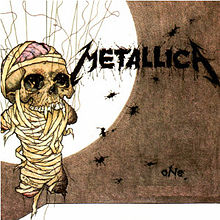 Heavy metal bands have always been big on ghoulish, violent images for its album covers, both in photography and in illustrations, and Metallica was no exception.  The cover art for the LP “And Justice For All,” which depicted the Statue of Liberty bound and tethered in ropes, was the model from which designers came up with a single mummified/skeletal figure to represent the single “One”, using the same logotype on both covers. 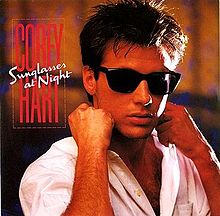 Beginning, I suppose, with Tom Cruise’s look in the film “Risky Business,” Wayfarers and Ray-Bans became required accessories for pretty boys in the movies and in rock.  Corey Hart took that a step further with the obvious hit “Sunglasses at Night,” and for the single cover, he added sunglasses to the same wardrobe he’d used on his accompanying album cover, 1984’s “First Offense.” 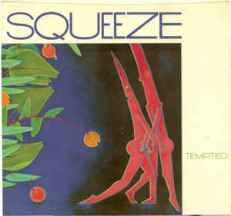 Instead of featuring a photo of the band members posing or performing, as they did for the album cover for “East Side Story,” this single used a compelling conceptual illustration by Patricia Dryden, depicting Adam and Eve’s temptation toward the apple in Eden.  Note, also, the clever way the word “Squeeze” pushes (or squeezes) the two “e”s together. 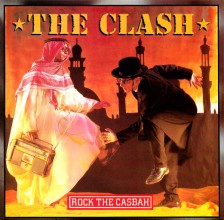 One of the iconic British punk/rock bands of the ’70s and ’80s, The Clash was known to push boundaries with lyrics, live shows, and album artwork.  By 1982, they had learn to trust the work of designer Jules Balme, who came up with a provocative painting/live model rendering of an Arab sheik and a Jewish rabbi dancing together outside a casbah.  It’s far more interesting than the “Combat Rock” LP cover, a relatively bland shot of the group clowning around alongside railroad tracks. 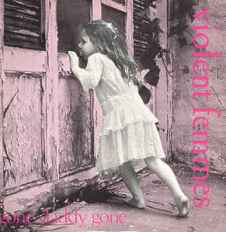 A 3-year-old girl named Billie Jo Campbell was randomly selected by photographer Ron Hugo one day in L.A. where she was walking with her mother.  She was persuaded to look in the door of a condemned old house to see what was in there, and Hugo quickly snapped the photo, which was used on The Violent Femmes’ 1983 single “Gone Daddy Gone.”  The Femmes were Wisconsin natives but never charted higher than the mid-50s in the US, although they managed better results in Australia and the UK. 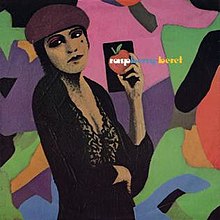 “Around the World in a Day,” Prince’s follow-up to the megaplatinum “Purple Rain,” adopted a dense psychedelic style, and he wanted the corresponding album art to reflect that leaning.  Painter Doug Henders worked for months on the album’s unusual, stylized cover art, and the single sleeve for “Raspberry Beret” was cropped from that sprawling painting.

The Cars’ fifth LP, 1984’s “Heartbeat City,” used the precise artwork of pop artist Peter Phillips, who gathered several iconic pop culture images, from muscle cars to the kind of buxom women he had illustrated for Playboy Magazine for years, and merged them in a flashy montage.  A spinoff of the cover, using a different color scheme, showed up on the sleeve for the hit single “Drive.” 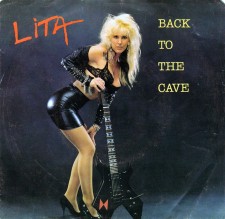 The Runaways were arguably the first all-female rock band, enjoying success in the second half of the ’70s employing a look of tough bad-ass girls.  When Joan Jett and then Lita Ford went solo in the ’80s, they so no reason to mess with that success, maintaining the tight-leather-and-lingerie look that apparently appealed to their target audience.  I doubt Ford’s cover for her “Back to the Cave” single would meet the approval of the #MeToo crowd today. 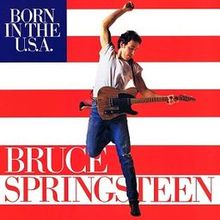 One of the most popular albums of the Eighties was Springsteen’s “Born in the U.S.A.,” whose LP cover showed The Boss’s butt and a ball cap in front of a flag backdrop.  For the release of the title song as a single, they used another image from the same photo shoot, with Bruce leaping in the air with his guitar, also in front of a huge U.S. flag.  The album had seven Top Ten hit singles, each with its own distinct sleeve art. 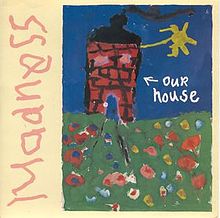 One of England’s leading pop/ska bands of the late ’70s through the present day, Madness never caught on in the US, with one big exception:  They made it all the way to #7 in late 1982 with their melancholy single, “Our House.”  The band wanted a childlike piece of art for use on the single’s cover, but instead of lifting something by the likes of Andy Warhol or Peter Max, they chose to visit a local elementary school, surveyed the display walls in the art classroom, and selected six-year-old Karen Allen’s simple painting of her family’s house. 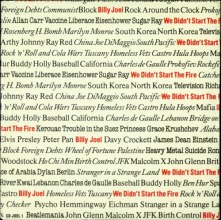 This #1 hit is teeming with lyrics that list various people, places and events that define post-World War II pop culture and current events.  I can’t think of a better concept for illustrating the single’s cover than with black-and-white type of all the song’s lyrics that resembles a news teletype or newspaper column.  Joel said he wrote it to dispute the fact that all of society’s ills had been created by the Baby Boom generation. 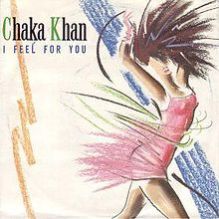 Khan, a major funk vocalist for many decades, was starting to peak with 1984’s LP “I Feel For You,” whose title single was the first R&B single to feature a rapper as well.  The striking hand-sketched chalk illustrations by Anne Field mimicked a popular aesthetic of early ’80s design, with bold colors and swirls indicated Khan in pensive thought (on the album) and in motion on stage (on the single). 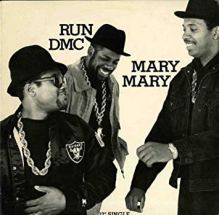 This early hip-hop group, who successfully merged rap and rock, are credited with creating the hip-hop fashion style that came to define the genre:  Huge ropy gold chains, oversized clothing, unlaced white Adidas sneakers and Kangol hats.  These all showed up on the “Mary, Mary” single sleeve, even more prominently than on the companion LP “Tougher Than Leather.” 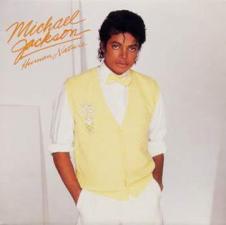 “Thriller,” as everyone knows is one of top-selling albums of all time.  Released in late 1982, it spawned seven Top 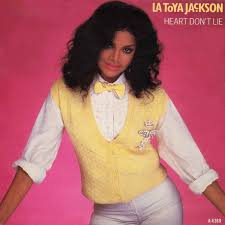 Ten hit singles between October 1982 and February 1984, and each 12-inch single sleeve featured a photo of Michael Jackson decked out in fashionable attire with his name and song title sharing the same cursive type face.  Jackson’s sister LaToya, struggling to succeed with her own career, released her own single concurrently with “Human Nature” and copied her brother’s fashion statement on the cover.