called Record Surplus that bills itself as “the last record store.”

While this is clearly not technically true, it sure seems like it sometimes.  Ever since the iTunes Store debuted online in 2003, record stores began closing their doors all over the country, and retailers who once had sizable music departments have repurposed that space for other product categories.

I find it profoundly sad that the majority of music purchases made today are downloads.  Quick and convenient, to be sure, but without any of the fun, the wonder, the sense of discovery and community that made a trip to the local record store in the ’60s, ’70s and ’80s such a warm and enriching experience.

I grew up in Cleveland, one of the nation’s hotbeds of rock record purchasing.  As in 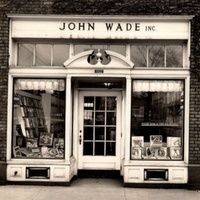 many major American cities, we could buy albums from many kinds of retailers.  They were available at Woolworth’s, appliance stores, department stores, traditional music shops like John Wade Records (where I bought my first few albums), and even trendy clothing stores like J.P. Snodgrass.

Then there were the major chains like Peaches, Record 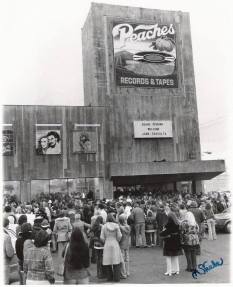 Theatre, Coconuts, Record Rendezvous, Camelot Music, and Disc Records, each with multiple locations across the region.

But the best record-buying experience was at the independent record store, and in Cleveland, the #1 place was Record Revolution, a very hip shop in the Coventry Village neighborhood of Cleveland Heights.  You could find all the new releases, comprehensive back catalogs, an enormous amount of imports unavailable elsewhere, and eventually, used albums.  The guys behind the counter were walking encyclopedias of knowledge and opinions, and they played the best stuff on the store sound system, which featured massive “Voice of the Theatre” speakers.

For music-loving record collectors like me, it was a slice of heaven.  I recall visiting Record Revolution at least once a week throughout my high school years, and for many years afterwards.  I could spend hours there, scouring the bins for rare releases, and 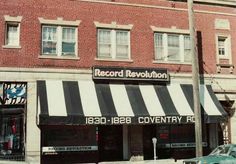 finding albums by unfamiliar artists with cover art that mesmerized me.  I don’t think I ever left without at least one new album under my arm, often one that was recommended by an employee there.

“Record Revolution gave me a sense that I was entering a new world,” recalled Chris Abood, a longtime Cleveland friend and sometime disc jockey whose voluminous record collection rivaled mine.  “I wasn’t just buying records, I was having an experience there.  The records I bought there seemed more valuable because it was the coolest record store in Northeast Ohio.”

There were plenty of other independent record stores around Cleveland — The Shoppe, Melody Lane, Wax Stacks, Budget Records, and shops specializing in used records like The Record Exchange — and they all had people working there who had a passion for music.  They were helpful and genuinely interested in talking about, and recommending, bands and albums, both past and current.

I’ve been thinking a lot about all this because I’ve been reading a book called “Record Store Days” by Gary Calamar and Phil Gallo, first published in 2010.  Both authors have

been heavily involved in the music industry, starting as record store customers, then employees, eventually major music writers and TV/film music supervisors.  Their book, subtitled “From Vinyl to Digital and Back Again,” goes into great detail about the history, culture, evolution and resurgence of record stores, with numerous photos and stories from the retail segment’s heyday.

With the birth of rock and roll in the mid-’50s came the phenomenon of the record store as community center, a place where teens would congregate to pore over, listen to and purchase the latest hits as 45-rpm singles.  Those of you who came of age in the ’50s and ’60s may remember that some records stores offered “listening rooms,” where buyers could take a 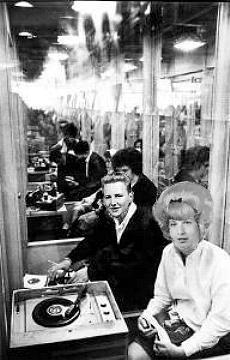 handful of singles from the store’s racks and give them a spin on the turntables before deciding if they wanted to buy them.  (Some small shops like the aforementioned Record Surplus offer this convenience today.)

As the record-buying audience increased, and the favored format evolved from singles to albums in the late ’60s, many independent stores opened in cities large and small across the country.  Some specialized in blues records, or jazz, or country, depending on the preferences of the local market.  At the same time, general interest record stores born from humble beginnings grew to become national, even international success stories, such as Tower Records in California and Sam Goody in New York.  In Los Angeles, Wallichs Music City was the leading music retailer.  In Toronto, Sam The Record Man was considered THE place to go for any avid collector.

The mainstream outlets offered the more conventional records (Sinatra, movie soundtracks, classical recordings) and some of the most popular pop/rock releases (The Beatles, The Stones, Simon and Garfunkel), but they had to be persuaded by popular demand to stock the so-called “rock underground” music being played on the burgeoning FM rock radio stations (Frank Zappa, Canned Heat, Lou Reed).

Their reluctance to do so brought about the many hundreds, even thousands, of eclectic hole-in-the-wall stores with names like School Kids, Orpheus, Criminal Records, Mars

Music, Zodiac, Streetside Records and Mojo Music.  These shops, with a savvy eye on their clientele, typically created unique environments, often covering every inch of wall space with album covers and psychedelic posters, and they would add headshop-type paraphernalia and alternative magazines to their mix of products for sale.

Lenny Kaye, responsible for the groundbreaking “Nuggets” garage-rock compilation, worked at Village Oldies in New York in 1970.  “There’s a vast fraternity of record collectors, and the record store was their hub,” he said, “There was not a lot of information on these groups or the labels, so you’d gather at the record store, and it would be like a library.  You could browse at will for hours and hours, and share stories and trivia about the songs and the bands.”

These kinds of stores thrived throughout the 1970s, and even endured the introduction and eventual dominance of CDs over vinyl that took place during the 1980s.  By the 1990s, record store chains consolidated, and their retail spaces all started to look homogenized.  The employees working the counter at these stores were no longer passionate music people who knew about obscure albums by little-known British bands.  The big box stores — Circuit City, Best Buy, Borders, Wal-Mart, Target, Barnes & Noble — became the retail leaders, even though they made most of their money on appliances electronics and household goods.  They became bigger and stronger, hoping to eliminate the competition. 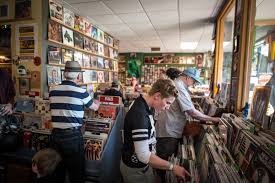 The independent stores remained the industry’s neglected heroes, carrying, for example, grunge records before the genre became widely popular.  Many of these stores, or their generational successors, today remain popular niche outlets for the serious music lover looking to buy something beyond the “American Idol” artists and boy bands.

“Record Store Days” points out that the owners of smaller niche stores were, in effect, curators, carefully selecting their stock based on their location and clientele — beach towns, college towns, funky urban neighborhoods.  Kimber Lanning, owner of Stinkweeds in Phoenix, explained her strategy:  “I’ve made a career of being one lap ahead of the competition.  I have always sold things that will be popular a year later.  The more popular something became, the fewer copies we sold.”  Rand Foster of Fingerprints in Long Beach agreed.

“The important part of retail music is the culture you’re selling.  It’s the museum element that stimulates people.”

In their book, Calamar and Gallo offer many sidebar stories about specific contributors’ remembrances of first visits to record stores.  Here’s one from early 1969:  “I found myself in another world — rows and rows of records, the smell of incense, and T-shirt iron-ons in the air.  The store was mystery upon mystery.   The Who had so many albums!  Who are Led Zeppelin?  Is that a pipe?  I brought the first Who record home and lost my mind…  I soon became incapable of displaying any fiscal responsibility in the face of a record I was curious about.”

The book quotes famed screenwriter/director Cameron Crowe, who wrote and directed the coming-of-age rock movie “Almost Famous” (2000).  “Record stores are a community of shared passion.  You see the look in people’s eyes and know that everyone is there for

the same reason.  Record stores were way more personal than radio.  The music just sounds better.  And you feel like you’re in the beating heart of the thing that you love.”

In “Almost Famous,” Crowe wrote this line for the character Penny Lane to deliver:  “If you ever get lonely, go to the record store and visit your friends.”  Says Crowe,  “I did feel that those records in that store were my friends, and I really miss that.”

With the return of vinyl, record stores are starting to sprout in cities everywhere these days.  If you do a Google search of “record shops” in your area, you’ll likely be pleasantly surprised to see how many options you have.  Here in Los Angeles, the supersized 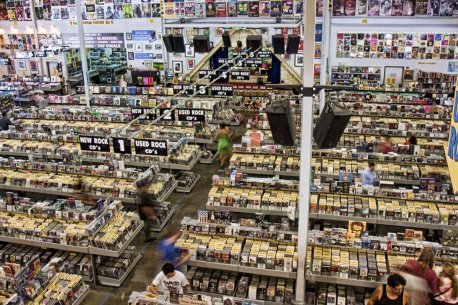 Amoeba Records on Sunset Boulevard in Hollywood is in the process of relocating and downsizing, but they intend to remain a dominant force in record retailing (vinyl and CD), including continuing their tradition of sponsoring release-day appearances and signings and even concerts by the artists.

As “Record Store Days” notes, “In chronicling the evolution of record stores, it’s a bit astonishing how often history repeats itself.  The creation of vinyl-only stores in the 21st Century neatly parallels the creation of LP-only stores 60 years earlier.  The number of owners who were employees and then bought the store they worked in continues to this day.”

So, although well over 75% of all music today is acquired through online sources, there are still stores you can frequent — to hang out, chat about music with like-minded souls, and purchase an actual record album that you can hold in your hands and cherish forever.

“Meet me at the record store, even though it ain’t there anymore, you can sing to me that song about time moving on…”  — “Record Store,” Butch Walker, 2016