There were so many fantastic bands making incredible music in the 1970s that sometimes it’s easy to neglect some of them.

Now it’s time to feature a group that never had a Top 10 album, no big hit single, no induction in the Rock and Roll Hall of Fame, but nevertheless maintained a solid following throughout their career and are still touring even today.

We’re revisiting the group’s music this week in the wake of the death of Paul Barrère, an extraordinarily gifted guitarist whose instrumental and songwriting prowess graced nearly every Little Feat record.

Bill Payne, the band’s co-founder and superb keyboardist, recalled, “Paul auditioned for Little Feat as a bassist when it was first being put together—in his words, ‘as a bassist, I

make an excellent guitarist’—and three years later joined the band in his proper role on guitar.  Forty-seven years later, he was forced to miss the current tour due to side effects from his ongoing treatment for liver disease.  He promised to follow his doctor’s orders and get back in shape, but I guess it was not meant to be.”

Any profile of Little Feat must begin with Lowell George, the remarkable singer/songwriter/multi-instrumentalist who found a way to blend funk, blues, gospel, jazz and country into a compelling stew that was at once lightly comical and deadly serious.

George’s father was a furrier to many Hollywood movie stars who became family friends, and young Lowell couldn’t help but be influenced by the likes of W. C. Fields hanging around the house.  A certain surreal humor was a hallmark of many songs 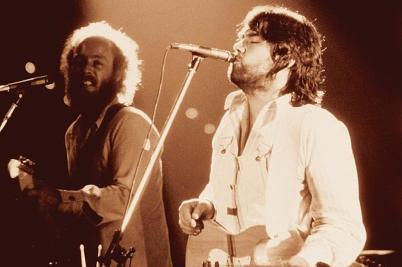 George wrote as part of the Little Feat canon.

Take the tune “Willin’,” a song he wrote in 1969 while serving as guitarist and backing vocalist for Frank Zappa’s group, The Mothers of Invention.  Despite his maverick persona, Zappa was a firm anti-drugs guy, and when he heard George’s lyrics — “And if you give me weed, whites, and wine, and you show me a sign, I’ll be willin’ to be movin’…” —  he strongly suggested George take his music elsewhere.

George decided, what the hell, I’d rather be in control of my own band anyway.  So in 1970, he teamed up with keyboardist Bill Payne, drummer Richie Hayward and bassist Roy Estrada to form Little Feat, so named, as the legend goes, because of George’s small feet (the spelling was changed to “feat” in homage to The Beatles’ similar spelling change).

The band’s first two records, “Little Feat” and “Sailing Shoes,” were largely ignored outside Los Angeles, the group’s home base.  “Willin'” ended up on both LPs because George didn’t think they’d done the song justice in its first version.  Eventually it 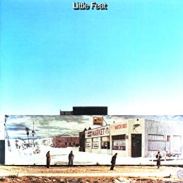 attracted the attention of other artists including Linda Ronstadt, who covered it on her #1 breakthrough 1974 LP “Heart Like a Wheel.”

In a bold move in 1973, George essentially re-invented the sound of Little Feat by adding three new members — Kenny Gradney on bass, Sam Clayton on congas and percussion, and old high school pal Barrère on guitar.  Gradney and Clayton joined with Hayward to become one of the most renowned rhythm sections in rock & roll and gave the new line-up a funky sound that recalled the great New Orleans band, The Meters.  It was the addition of Barrère, though, that gave the band more depth, as his presence on rhythm and lead guitar allowed Lowell George to concentrate on developing his slide guitar technique.

Right from the get-go on the opening title track of 1973’s “Dixie Chicken,” Little Feat hit their stride and began carving an original groove that carried them through their next 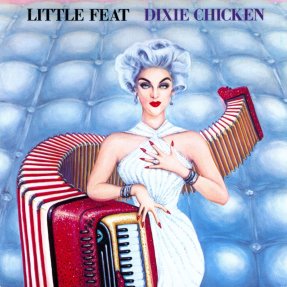 “Lowell and I wanted to keep the band elastic, so if we needed to include more players to keep the music eclectic, we would do so,”  said Payne.  “The idea was that Little Feat would probably not be a household name, but we would make more than a dent within the musical and creative communities, and we’ve certainly done that.”

With swampy rhythms, nasty slide guitar, earthy vocals and whimsical lyrics, Little Feat developed its still-loyal audience and enjoyed increased success as a dynamic band in concert, peaking just as they recorded their double live album “Waiting for Columbus,” which reached #18 on the charts in 1978 and is often mentioned as one of the best live 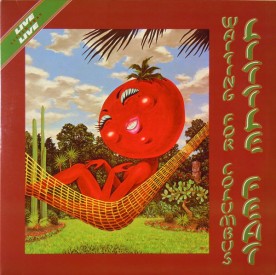 George loved to sit in with, and produce, other artists as a way of maintaining control of his artistic energies.  In particular, he shepherded Bonnie Raitt through her early career, helping her develop a slide guitar prowess that ultimately eclipsed his own.

Payne, too, had been spending time recording keyboard parts with The Doobie Brothers, driven to do so when George’s penchant for endless overdubbing Little Feat tracks in search of perfection exasperated Payne and others.

Sadly, George’s hedonistic approach to life got the better of him by then.  He ate too much, drank too much and experimented with any number of substances as he pushed away his bandmates with ever-erratic behavior.  He often declined to participate in sessions for the group’s next LP, “Down on the Farm,” instead spending his time on his long-delayed solo debut, “Thank’s I’ll Eat It Here,” released in 1979.

Already estranged from George, the band chose to break up at that point anyway, with other members taking studio session work when the opportunity arose.  By 1987, though, Payne, Barrère, Hayward, Gradney and Clayton chose to reunite, signing up ex-Pure Prairie League vocalist Craig Fuller and guitarist Fred Tackett in the process.  The result

was a sort of “Little Feat 2.0” that put them back into a heavy schedule of touring and recording.  1988’s “Let It Roll” proved to be an excellent comeback, and I saw the band put on an excellent show the following summer as the warm-up act for Don Henley.  Two more LPs — “Representing the Mambo” and “Shake Me Up” — continued this phase with lesser degrees of success.

Over the past 25 years, Payne, Barrère, Gradney, Clayton and Hayward soldiered on, only occasionally recording new LPs while they toured off and on.  Hayward’s death in 2012 brought in new drummer Gabe Ford. 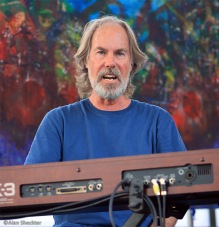 The future of Little Feat without Barrère is uncertain, said Payne, but it’s likely he and his bandmates will continue making music in one form or another.  “It’s all we’ve been doing all our lives.”

Payne had these parting words for his late collaborator:  “Paul, sail on to the next place in your journey with our abiding love for a life always dedicated to the muse and the music.  We’re grateful for the time we’ve shared.”

Full confession:  I was among the many rock music lovers who let the great records of Little Feat slide under my radar when they were being released.  It wasn’t until a good friend turned me on to the wonders of “Waiting for Columbus” around 1980 that I finally became hip to the band’s irresistible sounds, and I spent the next several years catching up, adding album after

album to my collection.

For those of you who aren’t familiar with Little Feat, I strongly recommend you get with the program beginning right here and now.  Those who already know and love the band will no doubt rejoice in being reminded of just how good they were, and still are.

I’ve compiled my own playlist of Little Feat tracks I consider representative of their finest recorded moments.