November 2007.  My wife Judy and daughter Emily were on a college trip visiting Nashville with a friend and her daughter to check out Belmont University.  While they were in town, they decided to buy tickets to the Christmas 4 Kids annual benefit concert that Charlie Daniels hosts every year at the fabled Ryman Auditorium.

They were told if they stopped in at a souvenir shop on Second Avenue where a Charlie Daniels Museum was set up in the back half of the retail space there, they’d probably 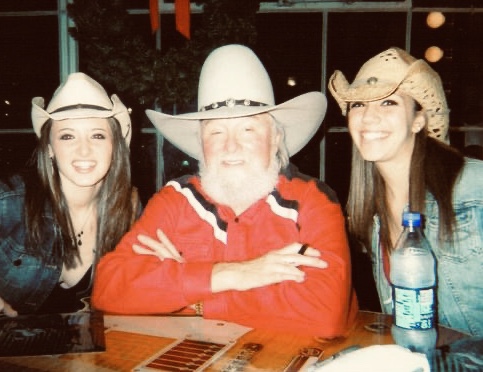 find the man himself, signing autographs and taking photos.

Sure enough, there he was, larger than life with his trademark ten-gallon hat.  Emily and her friend Sarah were thrilled to get their picture taken with the Nashville icon.

At the Ryman that evening, the ladies enjoyed performances by several country artists (including an up-and-coming gal named Taylor Swift) before Daniels and his band took the stage.  Two songs into their set, country star Martina McBride interrupted the proceedings to offer Daniels a Christmas present of his own.  “Thank you, Charlie,” she read from a letter, “for all you’ve done to make Christmas wishes come true for thousands of children through the years.  Now it’s time to make a wish come true for you.  You are officially invited to become a member of the Grand Ole Opry!”

Daniels was visibly stunned.  It took him several minutes to compose himself and offer his heartfelt gratitude for the honor he had dreamed about since he was a boy.  The girls witnessed a very special moment in the life of a very talented man who came from simple beginnings to become a major presence in country, bluegrass, Southern rock and blues music.

Now Charlie Daniels, at age 83, has died, a victim of a hemorrhagic stroke July 6th.

“My heart is crushed today,” said country star Travis Tritt.  “Charlie was the guy who took me under his wing and encouraged me when I was first getting started.  He was always there for me when I needed him.  I have so many great memories of touring, performing,

writing and recording with Charlie, but my favorite memories are of simply talking with the man when it was just the two of us alone.  Farewell, dear friend, until we meet again.”

Daniels has been universally admired for his superb abilities on the fiddle, guitar, banjo and mandolin, and as a vocalist and songwriter.  He was also revered by many for his kindness and generosity.  “He was one of the nicest, kindest people I have ever met,” said Jason Aldean.  “Thanks for the musical legacy you left for all of us.”

Singer/fiddler Natalie Stovall added, “Charlie Daniels was the epitome of a Southern gentleman.  He was kind, welcoming and so sweet.  Playing ‘Devil’ with him will forever be a highlight of my life.  No doubt The Devil is pissed as hell with how loud the angels are rejoicing in Heaven today.”

The “Devil” she’s referring to is, of course, “The Devil Went Down to Georgia,” Daniels’ signature song and by far his biggest commercial peak, reaching #3 on the pop charts and #1 on the country chart in the summer of

1979.  It’s essentially a spirited bluegrass workout, telling the story of a competition between Satan and local boy Johnny as to who was the better fiddler.  It was featured in the popular film “Urban Cowboy,” won the Country Music Awards’ Single of the Year, and earned the band a Grammy.  The album it came from, “Million Mile Reflections,” reached #5 on the pop chart and #1 on the country chart, and reached triple-platinum sales figures.

Born in North Carolina in 1936, Daniels grew up listening to Pentecostal gospel in church, bluegrass bands at local events, and R&B and country on Nashville 50,000-watt AM stations, including the Grand Ole Opry radio program.  At age 28, he had his first taste of success when he co-wrote “It Hurts Me,” a song Elvis Presley recorded.  Once he moved to Nashville in 1967, he worked as a session musician, often for his producer friend Bob Johnston, most notably playing guitar and electric bass on Bob Dylan’s 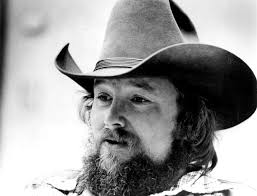 Daniels fattened his resumé by adding guitar and bass on Leonard Cohen’s “Songs From a Room” and “Songs of Love and Hate,” and also contributed to Ringo Starr’s country LP, “Beaucoup of Blues.”  Tammy Wynette and Barbara Mandrell recorded a few of his songs, and he even produced a few albums for artists like The Youngbloods.

His first couple of solo albums barely made the charts, but his third included the whimsical country story-song “Uneasy Rider,” the humorous tale of a traveling hippie who talked his way out of a fight in a redneck bar, which became a surprise Top Ten pop hit in 1973. 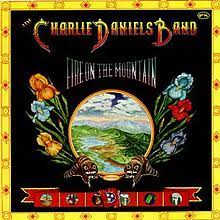 The 1974 album “Fire on the Mountain” was the first to be credited to The Charlie Daniels Band, which included Taz DiGregorio on keyboards, Tom Crain on guitars, Fred Edwards and Don Murray on drums and Charlie Hayward on bass.  CDB, as their fans called them, toured relentlessly and began hosting and headlining the annual Volunteer Jam in Nashville that year, a tradition that ran for 20 years and featured big names like The Allman Brothers Band, Willie Nelson, Stevie Ray Vaughan, James Brown, Emmylou Harris, Ted Nugent, Chris Stapleton and Billy Joel.

(“Saddle Tramp”) that were huge in concert.

They maintained a steady core audience throughout the ’80s, appearing on “Saturday Night Live” in 1982 and having a Top Ten country hit, “Drinkin’ My Baby Goodbye,” in 1986.   By the late 1990s, Daniels and his longtime manager David Corlew founded Blue Hat Records and released a diverse slew of albums, including his first all-bluegrass album, several Christmas collections, and “Deuces,” an LP of collaborations with the likes of Dolly Parton, Vince Gill, Brad Paisley and Brenda Lee.

Daniels had shown a slightly-left-of-center political leaning during the ’70s when he advocated for legalizing marijuana and appeared at fundraisers for Democrat Jimmy Carter’s presidential campaign.  As the 1980s rolled in, Daniels’ first attempts at political lyrics in two mainstream hits showed him drifting toward the conservative side of the spectrum.  “In America” (#11) focused on the heartland’s patriotic response to the Iranian

hostage crisis, and “Still in Saigon” (#22) commiserated with veterans who returned from Vietnam with post-traumatic stress disorder and other mental illnesses.

In the new millennium, Daniels chose to take on an increasingly outspoken role in the issues of the day.  After the 9/11 attacks, he issued a single, “This Ain’t No Rag, It’s a Flag,” and when peace activists protested the impending war in Iraq, he wrote “an open letter to the Hollywood bunch,” calling them “pampered, overpaid, unrealistic children.”  He also issued anti-abortion arguments, defended the Second Amendment, and later castigated Barack Obama’s policies.  He seemed to relish in stirring the pot, and since most of his conservative Southern fan base concurred with his views, he didn’t see any downside.

His health began failing around 2010.  He had prostate cancer surgery, suffered a mild stroke and had a pacemaker installed, and yet he continued performing and maintaining involvement in his charity events and philanthropic activities up until the end.  His final album was 2018’s “Beau Weevils:  Songs in the Key of E,” and he toured with Travis Tritt and the Cadillac Three late last year.

I was a modest fan of country rock during its mid ’70s heyday, and liked CDB’s music

fine, although I didn’t buy much of it.  I saw them in concert once, in the summer of 1982, when I was reviewing concerts for a Cleveland newspaper.  Here’s what I had to say at that time:  “CDB is a very tight band, and they clearly enjoy what they’re doing.  They offered two dozen songs that mixed the newer hits with a liberal dose of tunes from their earlier albums to keep new fans on their toes and older fans happy.  Without a doubt, it was Daniels, a mountain of a man with a gentle twang in his fine singing voice, who dominated the proceedings.  He played his trusty fiddle on only four songs, not quite enough to suit me, but his guitar and the piano, lead guitar and pedal steel of his colleagues more than compensated.”

My friend Mark, who was with me at that concert in ’82, reminisced about the time he saw the band in college.  “It was at the little old fieldhouse at Bethany College.  We sat on 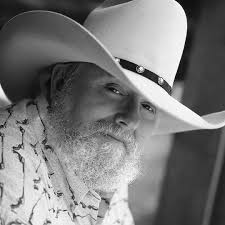 the floor right in front of the stage, with our cowboy hats and bottles of Rebel Yell, and we held up signs requesting ‘MORE FIDDLE!’  The band liked the signs enough that they invited us back stage to party afterwards.  What a memorable time hanging out with them.  They were all really great, fun guys, and such terrific musicians!”

Clearly, Charlie Daniels left quite a legacy as a musician, entertainer, storyteller, philanthropist, opinion sharer and friend.  As he often said, “God gave me a gift to play music for a living, and I feel it’s my responsibility to give something back.”  You’ve surely done that, good sir, many times over.  Rest in peace.

In appreciation of his music, here’s a Spotify playlist of The Charlie Daniels Band’s better known songs along with a few that may be new to you.