For decades, and still true today in some ways, rock music and television have had what Keith Richards describes as “a very weird, unnatural marriage.” 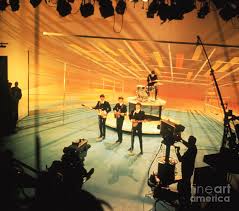 The Beatles’ debut on “Ed Sullivan”

From its inception, rock and roll was rebellious, brazen and controversial.  Television, on the other hand, was mostly bland, familiar and non-threatening.  They had very little in common.

Just as Hollywood and the movie industry ignored, mocked and dismissed rock and roll for many years, television also showed it little respect, at least at first.  Almost everyone in positions of power in TV — the network executives, the program producers and writers, the censors in the “Standards and Practices” department, the established stars and show hosts — all showed a very obvious disdain for rock and roll throughout the ’50s and much of the ’60s.  With only a few exceptions, it would take TV well into the ’70s before they recognized the growing appeal and marketability of rock, and even longer to acknowledge its artistic merits.

If anyone deserves credit for being a pioneer in bringing rock and roll to the small screen, it would have to be the late Dick Clark, “America’s Oldest Teenager” and host of the hugely popular, long-running “American Bandstand.”   Its roots were in Philadelphia, where a radio DJ named Bob Horn played records while local teens danced on camera, interspersed with

Jim Morrison and Dick Clark size each other up

short music films.  In 1956, Clark took over as host and, later, as producer and owner of the franchise.  It became nationally syndicated with a TV audience of more than 20 million, airing live on weekday afternoons, with teen dancers rating the records, and recording artists lip-synching to the recorded versions of their hits. “American Bandstand” moved operations to LA in 1964, where six shows were pre-taped every six weeks and broadcast in most markets on Saturdays, in color beginning in 1967.   The show evolved as tastes changed, from pioneer rockers (Buddy Holly and Bo Diddley) to California rock (The Beach Boys and Jan and Dean), from hard rock (The Doors) to soul (Stevie Wonder), disco (Gloria Gaynor) to hip-hop (Run-DMC).  Against all odds, on a fleeting medium like television, it lasted for 35 years, its final show airing in 1987.

The legendary Ed Sullivan, that curmudgeonly but savvy impresario who ruled Sunday nights for 23 years (1948-1971) with “The Ed Sullivan Show,” gets a nod for bringing 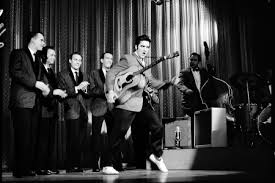 high-profile rock singers to mainstream audiences before anyone else, beginning with Elvis Presley in 1956.  Granted, he was rather patronizing, and insisted on limiting footage of “Elvis the Pelvis” to above-the-waist shots only.  But in the segregated late 1950s, he also was bold enough to defy the status quo by showcasing both known and unknown black artists like Bo Diddley, Jackie Wilson and Fats Domino.

Over the years, the list of rock groups who appeared on Sullivan’s show was fairly broad, from Buddy Holly to The Doors, from The Beach Boys to Smokey Robinson and The Miracles, from The Bee Gees to Ike and Tina Turner, from Creedence Clearwater Revival to Janis Joplin.  All these acts performed live,

with no lip-sync’ing, as was customary ON TV at that time.

And, of course, Sullivan is best known for being almost exclusively responsible for introducing America to The Beatles by featuring them on his show on three successive shows in February 1964, thereby opening the floodgates known as “The British Invasion” of English rock artists and forever changing the face of popular music and pop culture.

By the mid-’60s, pop/rock started showing up on a number of other traditional variety programs.  Musical variety platforms like ABC’s “Hollywood Palace” (1964-1970) gave airtime to some of the tamer bands like The Hollies, Herman’s Hermits, The Lovin’

Spoonful and the top Motown acts (Supremes, Temptations, Marvin Gaye, Four Tops, Stevie Wonder).  Even so, The Rolling Stones’ American TV debut  in June 1964 came on “Hollywood Palace” (as did the debut of The Jackson 5 in October 1969).

Conservative entertainers like Red Skelton and Dean Martin didn’t like rock music, but saw the wisdom in “giving the kids what they want” and 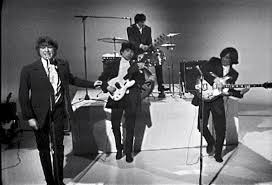 The Kinks on “Red Skelton”

reluctantly included a few of the more “vanilla” acts on their eponymous variety shows on CBS — The Dave Clark Five, Jan and Dean, Johnny Rivers, Manfred Mann, Dionne Warwick.  The hosts, in their introductions of some bands, couldn’t resist making condescending remarks about their long hair and amplified sounds:  The Kinks, The Stones, The Animals (1965); The Four Seasons, The Fifth Dimension (1967);  Iron Butterfly and Three Dog Night (1968-1969). 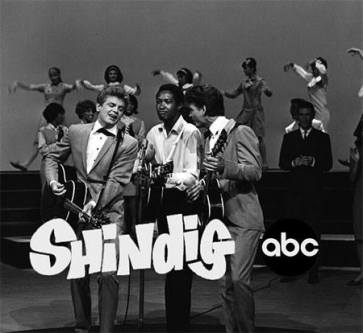 For a year or two, the prime-time TV lineup included shows for the teen market exclusively devoted to pop/rock artists.  ABC’s “Shindig” (1964-1966) and NBC’s “Hullabaloo” (1965-1966) managed to bring more than 150 different artists to TV audiences:  Sam Cooke, The Who, Sonny & Cher, The Righteous Brothers, James Brown, The Yardbirds.  “Hullabaloo” used safe guest hosts like Petula Clark, Paul Anka and Sammy Davis Jr. to make the program more palatable to parents who sometimes watched with their teenagers. “Shindig” featured dancers called The Shin-Diggers (including notables like 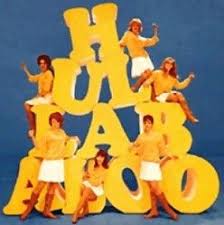 Teri Garr) and a house band called The ShinDogs, comprised of future-star session musicians who were members of the “Wrecking Crew” — Glen Campbell, Billy Preston, Larry Knechtel and Leon Russell.  “Shindig” taped some episodes from London, with Beatles manager Brian Epstein as the emcee.  Neither show lasted long; “Hullabaloo” gave up its Monday night time slot in 1966 to a rock and roll comedy, fashioned after The Beatles’ film “A Hard Day’s Night,” about a madcap pop group called The Monkees. 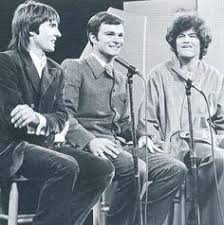 And there were other locally based rock/pop programs that eventually were syndicated.  “Where the Action Is,” another Dick Clark production filmed on the beaches of Southern California, enjoyed a brief arc of popularity in afternoon TV, with Paul Revere and the Raiders as the house band.  The syndicated show “Upbeat,” born as “The Big Five” on WEWS in Cleveland, lasted seven years (1964-1971).  At first it focused on regional talent like The James Gang, Mitch Ryder, The O’Jays and The Raspberries, but eventually featured some of the biggest names in counterculture rock — The Jefferson Airplane,

Steppenwolf, Love, Pink Floyd, even Lou Reed and The Velvet Underground.  The show also had the dubious distinction of airing Otis Redding’s final performance in December 1967 before he died in a plane crash the next day.

British TV had its own unique relationship with rock music.  “Top of the Pops” was a mainstay on the BBC from 1964 until 2006, an amazing 42-year run unmatched in

Bowie on “Top of the Pops”

television history.  Each show offered performances by bands with that week’s top charting singles, concluding with the week’s #1 single.  Famously, the debut show included both the Beatles and the Stones.  “The Old Grey Whistle Test,” which ran on BBC2 from 1971 to 1988, prided itself on avoiding chart-topping artists in favor of edgier, lesser known bands — Bob Marley and the Wailers, The New York Dolls, Judas Priest, Meat Loaf, Lynyrd Skynyrd. 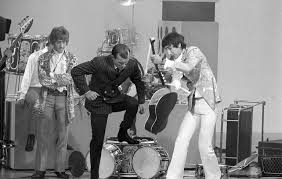 Tommy Smothers helps The Who destroy their instruments

By 1968, as revolution filled the air around the world and down the street, two TV shows attracted attention with hosts clearly sympathetic to the rock music world:  “The Smothers Brothers Comedy Hour” and “Late Night With Dick Cavett.”  CBS didn’t like Tommy Smothers or his leftist politics and soon cancelled the show (“CBS smothers Brothers,” read the headline), but ABC

gave Cavett a lot of leeway as he tried to compete with Johnny Carson’s “The Tonight Show.”  Carson, Merv Griffin and other talk shows very rarely booked rock groups at that time, but Cavett not only gave rock bands a place on TV to perform but also a forum to sit and chat about edgy topics like politics and drug use.  Artists like Jimi Hendrix, John Lennon and Yoko Ono, Crosby Stills and Nash, Joni Mitchell, Grace Slick, David Bowie, George Harrison and Paul Simon all sat for articulate, meaningful interviews in addition to their musical performances.

When the Seventies arrived, so did several rock and soul music showcases that lasted for a decade or more, and they offered an important difference:  Lip sync’ing was abolished in favor of live performances.  Rock audiences had complained about the antiseptic nature of rock music on Sixties TV, where it was obvious the bands’ electric guitars 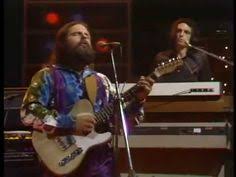 weren’t even plugged in and the vocalists weren’t singing into the microphones. 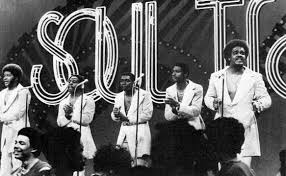 The Stylistics on “Soul Train”

And then there was “Soul Train,” the syndicated ratings behemoth that focused on soul and rhythm-and-blues while dabbling in funk, disco, jazz, gospel and hip-hop as well. Born in Chicago in 1970, it found immediate success there and the first few syndicated markets it tried (Detroit, Cleveland, Atlanta, Philadelphia) and then relocated its operations to LA in 1972, with nationwide syndication that lasted until 2006.  The show, dubbed “the hippest trip in America,” was a highly influential sounding board for many dozens of urban artists, from The Stylistics to Bill Withers, from Barry White to The Ohio Players, from Gloria Gaynor to The Commodores.  The Philly instrumental band MFSB, with The Three Degrees on vocals, had a huge #1 hit in 1974 with the “TSOP (The Sound of Philadelphia),” which served as the theme song for “Soul Train” for three years. 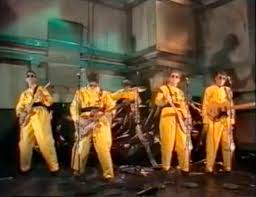 The paradigm really shifted dramatically in the early 1980s as cable television spread from the rural valleys to the suburbs to the nation’s largest cities, challenging broadcast TV norms.   A cornucopia of “Narrowcast” channels offered entire networks devoted to cooking, or Congress, or fishing, or Christianity…or rock music.

Music TeleVision, soon known far and wide as MTV, rocked everyone’s boat, rewriting the rules and pumping new life into everything from filmmaking and choreography to fashion and hair styling.  Oh, and incidentally, music.  Rock music fans suddenly had their own channel, a place they could go 24 hours a day to listen to — and watch — rock bands playing rock music.

When MTV went on the air in August 1981 with the symbolic song “Video Killed the Radio Star” by The Buggles, there weren’t many music videos out there, so the ones that 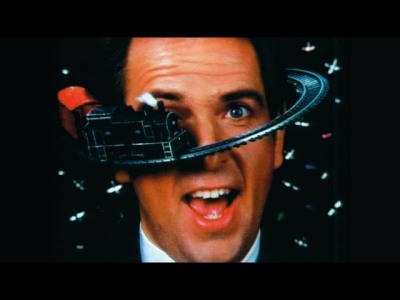 existed — a strange brew of Rod Stewart, Pat Benatar, Men at Work, REO Speedwagon, Andrew Gold, Devo — were aired ad nauseum.  But it didn’t take long for artists and record companies to grasp the new dynamic, and within months, most major pop single releases were accompanied by down-and-dirty music videos of the band performing its hit in various locations.  Within a year or two, the budgets exploded and the videos involved serious directors (David Fincher, among others), outrageous concepts and huge casts of dancers and extras.

Michael Jackson’s iconic 13-minute video for “Thriller” brought MTV’s largest audience ever.  Keith Richards amended his earlier assessment:  “Since the beginning of time, rock and roll and TV have never really hit it off.  But suddenly it’s like they’ve gotten married and can’t leave each other alone.”

Interestingly, by 1992, MTV chose to phase out music videos in exchange for more profitable, non-music programming, alienating their music-loving viewers.  “They don’t play music videos anymore,” whined rocker Sammy Hagar.  “How dare they still call themselves MTV!” Cynics said the acronym now stood for Money TeleVision, and they had a point.

These days, rock music has infiltrated TV in multiple ways.  Rock songs play almost continually in the background of drama shows like “Grey’s Anatomy” and “Scandal”; rock bands appear regularly on every talk show from Jimmy Fallon to Jimmy Kimmel; rock anthems by The Who are used as theme music for the “CSI” franchise; even most commercials use rock tunes to sell their products.

In recent years, the business models of both television and pop/rock music have been battered and shattered to such a degree that it almost makes this essay seem quaint.  But it’s fascinating to note that TV and rock music, once like oil and water, are now pretty much inseparable. 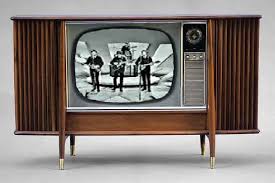 Did your living room have one of these in the ’60s?