Of all the statistics and facts being reported in connection with the extraordinary “Desert Trip” concert experience in Southern California this month, two stood out to me:

1) The average age of the dozen headlining rock titans performing is 72 years old.

2) The combined careers of these musicians as recording/performing professionals totals more than 300 years.

“Hope I die before I get old,” indeed…

No wonder some critics are derisively referring to these shows as “Oldchella” (in reference to the event’s location at the Empire Polo Grounds out in Indio, the same grounds as the famed Coachella Music Festival).

Desert Trip was conceived as a festival for baby boomers who don’t want to go to real festivals anymore, but they might if conditions were right and the lineup was enticing, even at a relatively steep price.  That means they didn’t want anything resembling Coachella or other current festivals, with more than 100+ acts on multiple stages, and crowds forced to stand and walk all day in the blazing heat, and deal with port-a-potties and crummy food choices.

Promoters wisely focused on only two bands per night, MAJOR artists, performing after dusk, with reserved seating, luxury bathrooms, gourmet food options and so forth. Concertgoers were given the chance (last weekend and again this weekend) to attend one, two, or all three evenings of Desert Trip, where they would be treated to the following lineup:

Bob Dylan warming up for The Rolling Stones on Friday

Neil Young warming up for Paul McCartney on Saturday

The Who warming up for Roger Waters on Sunday

Whoa.  That’s six of the most enduring acts in the history of rock and roll, all in one place.  Sounds like the opportunity of a lifetime for a classic rock music fan like me.  And sure enough, many of my friends and readers have assumed, since I live in relatively nearby Santa Monica, that I would surely be attending.

Nope.  For a number of reasons, I’m not going:

Past their prime.  As far as I’m concerned, all six of these acts are years, even decades, past their peak form.  If I’d never seen them perform live before, well then maybe I’d go for it, but I’ve seen each of them at least once back in their glory days, and totally loved it…and I had the uneasy feeling that my expectations would probably not be met this time.

Past my prime.  I’m 61 and reasonably healthy, but I shudder at the thought of the endurance test Desert Trip sounds like.  Driving there through 2-3 hours of LA traffic; dealing with parking or shuttles or Ubers once I get within about five miles of the venue; walking another mile or two to my seat; waiting in long security lines outside and food/drink and restroom lines inside; coping with many thousands of boisterous strangers throughout; and then face it all again two more consecutive nights.

I know, I know, I sound like an old fart…but hey, I’ve been to damn near 400 concerts in my life, and I just can’t work up the enthusiasm to deal with all that anymore.

Over my budget.  When tickets went on sale in May, promoters were selling 35,000 reserved seats at three price levels — $1,600, $1,000 and $700 — for all three nights.  Also available were 35,000 general-admission tickets to a large fenced area well behind the reserved seats for $400 for the three-night experience.  (You could also go for just one night and pay $200 for a general-admission ticket

.)  So, assuming you’re taking a date, a whole weekend there will set you back anywhere from $800 to $3,200…and that’s not including overnight accommodations and transportation costs.  I can think of much better ways to spend that kind of cash.  (I should mention here that tickets eventually became available on the resale market for less than half their face value, so it was possible for people to spend considerably less to attend all three nights.)

But I’ve heard and read accounts from those who attended all three shows last weekend, and while it wasn’t without its glitches and disappointments, the experience generated mostly very positive reviews.

The New York Times‘ Jon Pareles — who, at 62, has been reviewing concerts for almost as long as these acts have been making music — showered accolades on all six artists, and the event’s concept and staging.  He called the lineup “the last of a very limited breed” that “delivered many of the songs that became cultural touchstones.”  He praised their effort and authenticity as well:  “They played as if they still have something to prove,” he wrote, “and none of them took their songs, no matter how popular, for granted.”

Regarding Friday’s show, he praised Dylan’s usual reimagining of classic songs like “Masters of War” and “Ballad of a Thin Man” as being sung “with deep cunning and venom coming through his much-weathered voice.”  He also particularly liked the way the Stones’ guitarists, Keith Richards and Ronnie Wood, “played non-stop games of syncopation and suspense amid the band’s well-known riffs” on war horses like “Start Me Up” and “Midnight Rambler.”

By most accounts, Young was the story of the festival, stealing Saturday’s show, first with an endearing batch of acoustic classics like “After the Gold Rush” and “Harvest Moon” and then a fiery electric set with his new band Promise of the Real, cranking out “Cowgirl in the Sand” and “Rockin’ in the Free World.”  The genial, more controlled McCartney was a crowd pleaser too, offering two dozen Beatles songs and another dozen solo hits, augmented by fireworks and the return of Young to join in for spirited versions of “A Day in the Life,” Lennon’s “Give Peace a Chance” and, of all things, “Why Don’t We Do It in the Road.”

Steve Appleford of Rolling Stone noted how Sunday’s performances by The Who and Roger Waters offered an edgier, more political bent.  The Who’s set list drew heavily from the 1969-1973 triumvirate of “Tommy,” “Who’s Next” and “Quadrophenia,” with songs of defiance and swagger.  This band, he wrote, “were always as much about ideas and attitude as youthful spectacle.” He mentioned how Pete Townshend “jokingly recalled how hot and hip they once were, then a

dded, ‘We were a bunch of reprobates, actually.'”  Waters, meanwhile, played the longest set of the weekend, offering provocative pieces from throughout Pink Floyd’s repertoire.  Appleford mentioned how Waters told the crowd, “It’s rare that I get a platform like this, and I’m going to use it,” and then used his time-honored oversized inflatable pig, this time emblazoned with the words “F–k Trump and his wall.”

One concertgoer — Dawn Wiercinski, 42, of Los Angeles — answered my questions about creature comforts, prices, crowds, logistics and the quality of the performances.  She paid $900 for a reserved seat in the grandstand stage left, and attended as part of a group of six, who spent the nights at a friend’s house in nearby Palm Springs.

They drove themselves the first two evenings, arriving at mid-afternoon, but took a shuttle and an Uber the final night. “The first night departing was extremely challenging, with no direction for cars merging, but the second night was very easy with people there to direct everyone out,” said Dawn. The shuttle and the Uber took a little while, and the Uber charge to Palm Springs ran $100, “but after two nights of a free car ride, I figured the splurge was worth it.”

The 90-degree heat wasn’t much of a factor, she said, because the sun was setting before the first act took the stage.  Security checks went quickly, as did the second checkpoint where bracelets were scanned to admit entry.  “It was a very easy, very painless process every day,” she said.  “There is a lot of walking,” she conceded, “so you’d best be prepared with the right shoes.”  She offered common-sense advice like bringing empty water bottles to refill at various stations on the grounds.  As for restrooms, there were 1,000 flush toilets, but still, she suggested visits during unfamiliar songs rather than waiting until between sets.

Dawn hadn’t seen any of the bands before except the Stones in 2006, so she felt the investment was definitely worth it.  “I knew this was ‘the’ opportunity to see these amazing acts.  We’re all getting older!”

Here was her verdict on the performances (and my history of seeing these acts in past years, just for fun and perspective):

Neil Young.  (I’ve seen him most often:  at old Cleveland Stadium on the spe 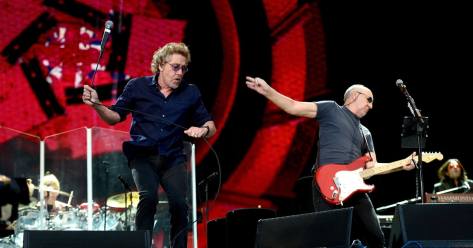 ctacular 1974 Crosby Stills Nash & Young stadium tour; in 1976 in Cleveland at a stop on the one-time “Stills-Young Band” tour; at an intimate acoustic solo concert in Cleveland in 1983; and again with CSNY in Atlanta on their strong 2000 reunion tour…)  Dawn:  “Truly amazed me.  Was never a big fan, but now I’ll get more of his music.  His set was great, and his band, man, they just jammed through the evening!”

Paul McCartney.  (I was too young to see the Beatles, and just missed the 1976 “Wings Over America” tour, but I saw the 1991 stadium tour in Cleveland, and an outstanding 2009 appearance in Atlanta’s Piedmont Park in the pouring rain…)  Dawn:  “Truly special!  And Neil joined Paul, and these two were amazing!  The best evening of two strong musicians, and the most suited to be together on stage.”

The Who.  (Always regretted not seeing them when I had the chance while Keith Moon was still alive.  Saw them in Cleveland in 1979, only days after the tragic debacle in Cincinnati; then again in 1982 on the first of their many “farewell” tours; and most recently in Atlanta in 2006, with John Entwistle now gone too…)  Dawn:  “Everyone was ready to rock to The Who — they looked and sounded great!  So fun.” 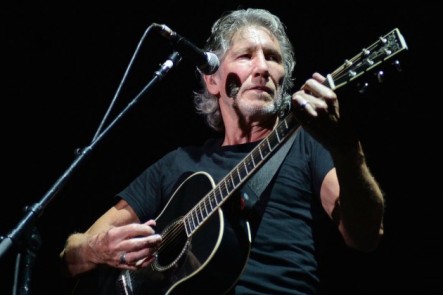 Roger Waters.  (The only one of the six acts I haven’t seen before…although I did see Pink Floyd at Cleveland Stadium in 1987 after Waters had acrimoniously left the band…)  Dawn:  “He played a lot from ‘Animals’ which I enjoyed, with great visuals and sound.  He delivered.  I wanted to be lost in the music, and I was!”

Her conclusion:  “It was spectacular!  I can’t pick which night was best — loved them all.  I’d do this again in a heartbeat!”

It’s unclear at this point whether a festival like this will ever be repeated, or become an annual event (Desert Trip II, III, IV…?).  It begs the question:  Would these same bands return next year for another go-round?  Or should different acts be sought?  If so, who?  The weekend certainly brought in a ton of money — an estimated $160 million.  The bands were handsomely paid, as were the promoters.  But this may have been a one-time thing.  Time will tell.

It appears I might have been a tad harsh in assuming these artists are a little too long in the tooth to still be cranking out the rock and roll to many tens of thousands at a festival.  I may be personally past the point of wanting to subject myself to the whole spectacle, but clearly, they are worthy of their current, enduring positions as titans of rock.