Periodically, I use this space to pay homage to artists I believe are worthy of focused attention — artists with an extraordinary body of work and a compelling story to tell.  In this essay, I salute the man who recently was selected as the first songwriter to ever win a Nobel Prize for literature:  Bob Dylan.

So many seismic lyrics.  So little space.

You might hate his voice.  Many people do.  You can find his public persona too prickly for your tastes.  You can certainly find fault with the lame songs, even whole albums, in his 50-year repertoire of recorded music.

But, like the esteemed folks who each year select the winner of the Nobel Prize for literature, you can’t deny that Robert Zimmerman of Hibbing, Minnesota, is an unparalleled master of poetic thought.  He possesses a rare command of the language that is brought to bear in epic storytelling, persuasive protest, angst-ridden idolatry, even throwaway singalongs.

He is supremely gifted in putting powerful and poignant phrases to all kinds of music — folk, rock and roll, blues, country, gospel.  From “Come gather ’round, people, wherever ye roam” in 1963 (“The Times They Are a-Changin'”) through “And I would not feel so all alone, everybody must get stoned” in 1966 (“Rainy Day Women #12 and #35”) to “And every one of them words rang true and glowed like burning coal…” in 1975 (“Tangled Up in Blue”) to “Freedom, just around the corner for you, but with truth so far off, what good will it do” in 1983 (“Jokerman”) and “You got the same eyes that your mother does, if only you could prove who your father was” in 2012 (“Pay in Blood”) — Bob Dylan has been writing lyrics that examine and reflect our lives for more than half a century now.

His lyrics are insightful, piercing, funny, scathing, heartbreaking, whimsical, bleak, fierce, enigmatic, profound.  On the occasion of Dylan’s 70th birthday in 2011, Rolling Stone published a special issue, in which seasoned writer Jon Pareles pointed out how Dylan’s songwriting draws “from the Bible and Shakespeare, from Celtic ballads and deep blues, from abstract poetry and street talk, from obscure movie dialogue and private lovers’ quarrels.” 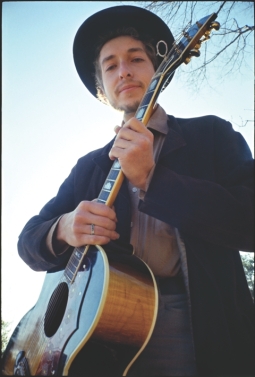 For me, it was a strange, disjointed journey to discover the wonders of Dylan.  Although I knew a few of his early radio hits — “I Want You,” “Like a Rolling Stone,” “Positively 4th Street” — I didn’t really click with his stuff until I was 14 and heard 1969’s “Lay Lady Lay” (which, by the way, was written for, but not used in, the soundtrack to “Midnight Cowboy”).  I loved that song, and bought the album it came from, “Nashville Skyline,” which happened to feature a sweet baritone voice (made possible by quitting cigarettes) far removed from the gravelly, nasal growl that marked everything he’d done up to that point.

And that was my problem with Dylan, mostly.  I have always much preferred a quality, trained singing voice like Sam Cooke, or David Crosby, or Joni Mitchell, instead of a gruff, untrained half-spoken delivery like James Brown, or Rod Stewart, or Janis Joplin.  Dylan certainly falls into that second category, and for many music lovers, it’s a deal breaker.  “I love his songs, but I really can’t handle his voice,” they say.

It’s an acquired taste, really.  When Dylan first arrived, he was vilified for being “a terrible singer of great songs,” as one critic put it in 1966.  Funny thing is, the voice on his masterpiece ’60s recordings is leaps and bounds better than the haggard, decrepit vocals we hear on any of his post-2000 albums, so it’s a matter of perspective.

Indeed, most of America learned of Dylan not through his own recordings but from cover versions with more conventional voices:  Peter Paul & Mary (“Blowin’ in the Wind”), The Turtles (“It Ain’t Me Babe”), Cher (“All I Really Want to Do”), The Byrds (“Mr. Tambourine Man”), even Jimi Hendrix (“All Along the Watchtower”).

There are still plenty of people who never took to Dylan, which is crazy, because his songs simply can’t be ignored.  For those folks, I highly recommend a remarkable 4-CD collection called “Chimes of Freedom:  The Songs of Bob Dylan,” compiled in 2012 to commemorate Amnesty International’s 50th Anniversary.  It offers 72 Dylan compositions from throughout his storied career, interpreted by 72 different artists from a phenomenally broad range of musical styles.  Check out Seal and Jeff Beck teaming up on “Like a Rolling Stone,” or Diana Krall caressing “Simple Twist of Fate,” or Eric Burdon’s ferocious take on “Gotta Serve Somebody,” or Ziggy Marley’s reggae version of “Blowin’ in the Wind,” or Johnny Cash and the Avett Brothers nailing “One Too Many Mornings.”  And there’s Sting, and Michael Franti, and Lenny Kravitz, and the late Pete Seeger, and Bryan Ferry, and Tom Morello, and Pete Townshend, and Kris Kristofferson, and Miley Cyrus, and My Morning Jacket, and, of course, Adele’s “Make You Feel My Love” (most of you Adele fans didn’t even know that was a Dylan song, did you?).

My generation’s Bard came out of a tiny hamlet in the northern hinterlands, migrated to New York’s Greenwich Village in 1961, played coffeehouses and small clubs, and started writing astonishing songs at a torrid pace that never let up until late 1966 when he was hurt in a motorcycle accident that, he conceded years later, profoundly affected him.  He had a spiritual awakening that manifested itself in the tone and lyrical temper of his songs thereafter, sometimes subtly (1967’s “Drifter’s Escape,” 1975’s “Shelter From the Storm”), sometimes brazenly (1973’s “Knockin’ on Heaven’s Door,” 1979’s “Property of Jesus”).

Dylan has always bristled when asked to discuss his songs, protesting, “If you have to explain ’em, then they weren’t any good in the first place.”  He has been an exasperating interview subject, even for sympathetic publications like Rolling Stone, although in recent years, he has proved to be surprisingly candid and forthcoming.  When asked where the monumental “Like a Rolling Stone” came fro

m, he conceded, “It’s like a ghost is writing a song like that.  It gives you the song and then it goes away.  You don’t know what it means…except the ghost picked me to write the song.”  He concludes that many of
his best known songs come from his love for and immersion in folk, country and blues traditions during his formative years.  But he has blazed trails as well; the case can be made that his 1965 diatribe “Subterranean Homesick Blues” was the first rap song.

One of the most intriguing things about Dylan is his restlessness, his all-over-the-map interests and influences, his willingness to work anywhere with almost anybody and everybody in his search to put down on tape the sounds that are wandering through his head.

He has recorded in New York, in Nashville, in LA, in Muscle Shoals.  He has performed and recorded multiple times with Robbie Robertson and The Band.  He has done duets with Johnny Cash.  He participated in George Harrison’s groundbreaking “Concert for Bangla Desh” charity shows.  He has enlisted guitar wizard Mark Knopfler and ex-Rolling Stone guitarist Mick Taylor.  He has recorded with Nashville greats like Charlie McCoy, Kenny Buttrey, Pete Drake and Charlie Daniels.  He has toured with the Grateful Dead and Tom Petty.  Blues guitarist Mike Bloomfield and keyboard legend Al Kooper are prominently featured on his mid-’60s albums.  More recently, Austin-based blues guitarist Denny Freeman, Los Lobos frontman David Hidalgo and multi-instrumentalist Larry Campbell have been at his side. 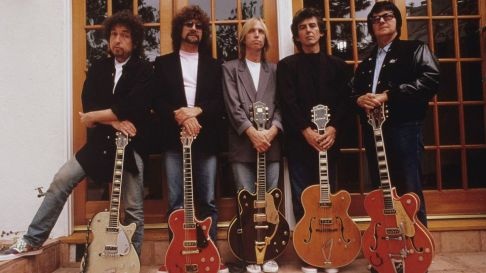 In 1988, he even signed on to be a de facto member of The Traveling Wilburys, a tongue-in-cheek consortium comprised of Dylan, ELO maestro Jeff Lynne, Heartbreaker Tom Petty, ex-Beatle George Harrison and the late great Roy Orbison.  They all brought great songs to the sessions, but one of the best was Dylan’s self-parody track, “Tweeter and the Monkey Man.”

Much like his contemporary Paul McCartney, he has gone through periods of laziness and fallow output (in Dylan’s case, 1970-1973, 1977-1982, 1990-1996) when it seemed he had lost enthusiasm for his craft.  But even then, every lackluster LP (“Shot of Love”) had at least one spectacular track (“Every Grain of Sand”) to keep our hopes up for a return to form. 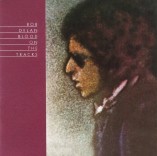 And he has always returned to form eventually.  Following his early ’70s trough, he came back with what some regard as his finest album, 1975’s “Blood on the Tracks.”  When he was counted out in the late ’80s, he startled us all with 1989’s smart “Oh Mercy,” produced by Daniel Lanois. 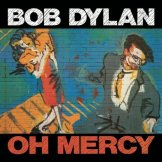 In the most recent 20 years, even though his voice has become virtually unlistenable on many tracks, Dylan has been remarkably consistent with quality songwriting on 1997’s “Time Out of Mind” (which won an Album of the Year Grammy),  the Oscar-winning “Things Have Changed” from the “Wonder Boys” film, and 2001’s “Love and Theft” and 2007’s “Modern Times.”  Sure, he’s been coasting a bit lately with LPs of ’40s standards and even a Christmas album, but mark my words, we haven’t heard the last masterpiece from this cat.

There are also several excellent film treatments of Dylan, achieved both with and without his involvement:  D.A. Pennebaker’s quasi-documentary “Don’t Look Back” (1967) chronicling parts of his 1965 British tour; Martin Scorsese’s documentary “No Direction Home” (2005), focusing on Dylan’s explosive first five years (1961-1966); and “I’m Not There” (2009), Todd Hayne’s extraordinary biographical musical drama based on Dylan but with broad fictionalized elements and a half-dozen actors portraying Dylanesque characters.

Dylan often recorded many dozens of amazing songs that never saw the light of day at the time, but have since been released retrospectively, first as “The Basement Tapes” in 1975 and, more recently, as the multiple-volume “Bootleg Series” for the completists and countless Dylan worshippers out there.

Some purists in literary circles have expressed their displeasure that the coveted Nobel Prize has been awarded to “a singer.”  What nonsense.  Bob Dylan is a lyricist first, a composer second, a reluctant celebrity third, and then, well down the list after that, he’s a singer (and some say not much of one).  I mean, come ON.  What are lyrics, after all, but poetry set to music?  Poets and playwrights have been among the Nobel winners in years past, and it’s about time that a musical wordsmith as perceptive as Bob Dylan finally earned literature’s top prize.

So what does rock’s new poet laureate do for an encore?  Does he have to do anything at all?  Isn’t this the crowning achievement?  Who can say?  Certainly not Dylan himself, who has yet to say anything publicly since winning the prize October 13th.

In conclusion, let’s take a gander at some of the devastating phrases and couplets Dylan has come up with as he addresses life’s hurdles and blessings:

Life:  “He not busy being born is busy dying…”

Betrayal:  “I ain’t sayin’ you treated me unkind, you could’ve done better, but I don’t mind, you just sorta wasted my precious time, don’t think twice, it’s all right…”

Resignation:  “People tell me it’s a sin to know and feel too much within, I still believe she was my twin, but I lost the ring, she was born in spring, but I was born too late, blame it on a simple twist of fate…”

Accusation:  “You’ve been through all of F. Scott Fitzgerald’s books, you’re very well read, it’s well known, but something is happening here and you don’t know what it is, do you, Mr. Jones?…”

Carefree love:  “Throw my ticket out the window, throw my suitcase out there too, throw my troubles out the door, I don’t need them anymore, ’cause tonight I’ll be staying here with you…”

Aging and wisdom:  “‘Equality,’ I spoke the word, as if a wedding vow, ah, but I was so much older then, I’m younger than that now…”