Anyone who knows the Hackett family knows that Halloween is our favorite holiday.  We hosted the “Hackett Haunted House” for 12 out of 13 years from 1998-2010 at our Stilson Circle home in the Peachtree Corners area of Atlanta, Georgia, and it makes me smile, with a certain ghoulish delight, that so many people mention our haunted houses as among their fondest memories of Halloween during those years.

We always worked to frighten people as best we could, emulating horror movie themes and time-honored scary creatures — Texas Chain Saw Massacre guys, mad scientists, Frankensteins, evil clowns, Samarra from “The Ring,” Gollem from “Lord of the Rings,” The Wicked Witch of the West on the roof, the Creature from the Black Lagoon, scary pirates, guillotines, electric chairs, and on and on and on.  You needed courage to make it through our maze of scares and freaky surprises.

Sad to say, I think popular music has been kind of lame in its attempt to give us Halloween soundtrack music.  The more popular examples — Bobby “Boris” Pickett’s “The Monster Mash” (1962), Warren Zevon’s “Werewolves of London” (1978) and Ray Parker Jr.’s “Ghostbusters” (1984) — just don’t quite light my fire as anthems of Halloween.

(The best music for this holiday has always been instrumental movie music:  The shrieking violins of Alfred Hitchcock’s “Psycho” soundtrack; the haunting piano-based theme from John Carpenter’s 1978 film “Halloween”; the creepy strains that carry TV’s “The X-Files” theme; the first four minutes of the epic Mike Oldfield opus “Tubular Bells” from “The Exorcist” soundtrack.  We used all these and more in the background of our haunted houses.)

As I see it, my job here this week at Hack’s Back Pages is to remind you all of great rock music tracks, popular or obscure, that might make an appropriate setlist for a Halloween get-together.  Here, for better or worse, are 15 selections.  Have a Spooktacular weekend!!!!

Written by the great blues guitarist Peter Green and released as a single with his band Fleetwood Mac back in 1968, this song became a huge #4 hit for Carlos Santana and his band in 1970, from “Abraxas.”  It was combined in a medley with the 1966 track “Gypsy Queen,” and used congas, timbales and Latin polyrhythms to give the whole thing a distinct voodoo feel:  “Got your spell on me baby, yes, you got your spell on me baby, you’re turning my heart into stone, I need you so bad, magic woman, I can’t leave you alone…”

This ska/reggae song by one of The Eighties’ quirkier bands is a perfect fit for any Halloween costume party where the crowd is keen to dance.  Songwriter/leader Danny Elfman, now one of most celebrated film soundtrack guys of the past 30 years, came up with this infectious tune, plus “Weird Science,” “Don’t Look in the Basement” and other Halloween-appropriate material.  “I’m all dressed up with nowhere to go, walkin’ with a dead man over my shoulder, waiting for an invitation to arrive, goin’ to a party where no one’s still alive, it’s a dead man’s party, who could ask for more, everybody’s comin’, leave your body at the door…”

Well before Alice Cooper and other “shock rock” rock acts was Jay Hawkins, a blues singer who found his niche with the wild, mesmerizing 1956 recording of his titanic “I Put a Spell on You.” “I was just a normal blues singer,” said Hawkins, “but this version just fell into place one weird night in the studio.  I found out I could do more destroying a song and screaming it to death.”  His stage shows began with him in a cape, rising out of a coffin amidst smoke and fog, as he sang this chiller.  Numerous cover versions followed, by the likes of Creedence, Bryan Ferry, Nina Simone, Marilyn Manson, Annie Lennox, Jeff Beck and Joss Stone.  A true classic.   “I just can’t stand it, the way you always put me down, I put a spell on you, because you’re mine…”

Just as Motown mogul Berry Gordy’s impressive career was winding down, his son, Kennedy Gordy, burst on the scene as Rockwell, and rocketed to #2 with the stalker classic, “Somebody’s Watching Me,” which featured Michael Jackson on background vocals.  The song’s music video utilized a haunted house theme, complete with zombies, ghosts, ravens, graveyards, and references to the famous shower scene from the film “Psycho.” “All I want is to be left alone in my average home, but why do I always feel like I’m in the Twilight Zone, and I always feel like somebody’s watching me, and I have no privacy…”

A clever blend of parody and kitsch, of horror B-movies and ’50s rock and roll, “The Rocky Horror Show” was a sensation when it debuted on the London stage in 1973, and its 1975 film version, “The Rocky Horror Picture Show,” remains a midnight movie cult classic 40 years after its release.  The whole soundtrack is appropriate for Halloween, but “Time Warp,” with its dance-instruction lyrics and singalong chorus, is ideal for any Halloween party.  “Drinking those moments when the blackness would hit me, and the void would be calling, let’s do the time warp again…”

Jackson’s trailblazing 13-minute music video of his title track “Thriller” broke new ground as a short story, fully choreographed with gory zombie makeup, and the first to be preserved in the National Film Registry…and for the finale, horror movie legend Vincent Price recites the spoken section that ends with his maniacal laugh.  It has become a Halloween classic, and rightly so:  “It’s close to midnight, and something evil’s lurking in the dark, under the moonlight, you see a sight that almost stops your heart, you try to scream, but terror takes the sound before you make it, you start to freeze as horror looks you right between the eyes, you’re paralyzed…” 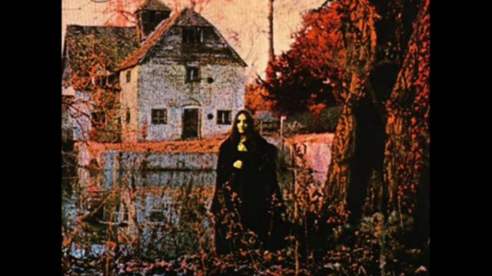 Death metal, Goth, Satanic rock — the bands who revel in these genres have plenty of disturbing, macabre lyrics that could certainly be deserving of space on a Halloween setlist, but frankly, I don’t claim to know much about them.  I do, however, recall the spooky chill that ran up my spine the first time I heard the song “Black Sabbath,” the leadoff track from Black Sabbath’s debut LP (and check out that creepy album cover).  An ominous tolling bell, a rainstorm with distant thunder, then huge power chords in a minor key, and Ozzy Osbourne demanding to know, “What is this that stands before me?”  Brrrrr.  If this isn’t Halloween music, I don’t know what is.

On their 1977 debut LP and again as the opening song of their brilliant concert film “Stop Making Sense” in 1984, new wave giants The Talking Heads offered up this chilling portrait of an unhinged loner.  Another character in a morbid Halloween gallery:  “I can’t seem to face up to the facts, I’m tense and nervous and I can’t relax, I can’t sleep ’cause my bed’s on fire, don’t touch me, I’m a real live wire, psycho killer, qu’est-ce que c’est?…”

Don Henley has said the inspiration for this early Eagles single was the wild, bewitching Zelda Fitzgerald, who haunted novelist F. Scott Fitzgerald all his life.  “I was also reading the works of Carlos Castaneda, and dating a girl who was into the occult,” he said. “All of those things came together to create the witchy woman.”  Nothing more Halloween-like than that:  “Raven hair and ruby lips, sparks fly from her fingertips, echoed voices in the night, she’s a restless spirit on an endless flight, woo hoo, witchy woman, she how high she flies, woo hoo, witchy woman, she got the moon in her eye…”

Out of Long Island, New York, in 1971 came Blue Oyster Cult, in the hard rock/heavy metal genre.  BOC guitarist Donald “Buck Dharma” Roeser wrote this 1976 hit single in his early 20s, imagining an early death for himself.  “I wasn’t suicidal,” he said, “just thinking cosmically about eternal love and premature death.”  Seems spooky enough to me to be perfect for a Halloween mix…   “Then the door was opened and the wind appeared, the candles blew and then disappeared, the curtains flew and then he appeared, saying, ‘don’t be afraid, come on baby, don’t fear the reaper’…” 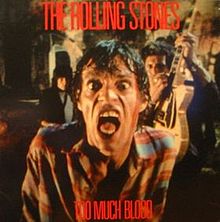 Mick Jagger gets the lion’s share of songwriting credit for this strangely compelling dance track that protests gratuitous violence in 1980s films.  Sparked by a lurid murder in Paris that year involving dismemberment and cannibalism, the song’s lyrics devolved into rap in the middle section, specifically mentioning “The Texas Chainsaw Massacre” and bemoaning, “I can feel it everywhere, feel it up above, feel the tension in the air, there’s too much blood, yeah, too much blood…”

Progressive rock bands have often written about strange creatures and happenings, and Tull songwriter Ian Anderson is no exception.  Minor chords and lyrics that lurk in furtive images are a prominent feature on the band’s 1979 album of nautical mystery, “Stormwatch,” which includes this spooky take of how ghosts have often threatened the well-being of sailors as they navigate the seas at night:   “Hair stands high on the cat’s back like a ridge of threatening hills, sheepdogs howl, make tracks and growl, their tails hanging low… I’ll be coming again, like an old dog in pain, blown through the eye of the hurricane, down to the stones where old ghosts play…” 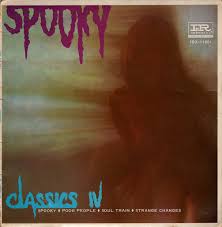 Written in 1967 as an instrumental featuring the saxophone riffs of Mike Shapiro, “Spooky” stalled at #57, but the next year, Mike Hirsch added lyrics about “a spooky little girl like you,” and the Classics IV took that version to #3.   James Cobb of the Classics IV went on to form The Atlanta Rhythm Section in the ’70s, and their re-recorded rendition in 1979 reached #17 on the charts.  Not really a very spooky tune at all, but still appropriate lyrically:  “Just like a ghost, you’ve been haunting my dreams, so now I know you’re not what you seem, love is kinda crazy with a spooky little girl like you…”

The two-note drone of a European emergency siren is the basic hook on which this gruesome song hangs, and embodies that feeling of dread you might feel as you approach a haunted house.  The lyrics graphically describe the thoughts of a plane crash survivor as he is brought into a hospital:  “I try to move my arm and there’s no feeling, and when I look, I see there’s nothing there…Life is flowing out my body, pain is flowing out with my blood, the sheets are red and moist where I’m lying, God in heaven, teach me how to die…”

It’s hard to decide which version of this classic song grabs me more:  Donovan’s 5-minute original, or the 11-minute track by Al Kooper, Stephen Stills and Co. on the legendary 1968 “Super Session” LP.  Donovan, the British mystical folkie responsible for “Sunshine Superman” and other flower-garden essays of the mid-to- 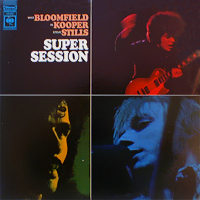 late ’60s, wrote it as a somewhat creepy ode to October.  Two years later, Stills & Kooper recorded a remarkable jam on Donovan’s chords that became something else entirely, also haunting and intriguing in its own way.  “When I look out my window, many sights to see, and when I look in my window, so many different people to be, and it’s strange, so strange…”