If you like a hearty laugh at Christmastime — and who doesn’t? — there’s this guy named Bob Rivers you should know about.

Thirty years ago this month, Rivers, a veteran disc jockey from Connecticut, was listening to the same old familiar Christmas tunes for the umpteenth time, playing incessantly on the radio, in the mall, at parties, everywhere.  “Enough!” he shouted, and decided he needed to give these seasonal songs a new twist.  Or, more accurately, he wanted to replace the real lyrics with something twisted.

In the tradition of musical comics like Allan Sherman, Tom Lehrer and Weird Al Yankovic, Rivers penned several parodies, using traditional Christmas songs, then gathered a few like-minded friends and studio musician acquaintances and made recordings of his amusing concoctions.  The result, released just in time for the 1987 Christmas season, was an album called “Bob Rivers’ Twisted Christmas,” a collection of Yuletide selections, both secular and hymn-like, with radically different (not to mention hilarious) lyrics. 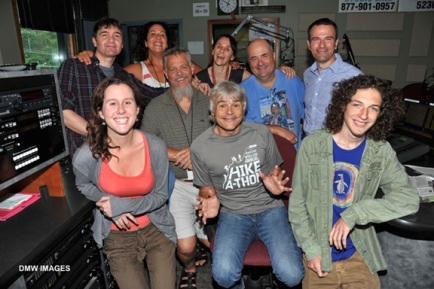 Rivers had already had some success writing and producing parodies of other songs, which were marketed through the American Comedy Network syndication service to stations around the country and Canada.  He also gained notoriety participating in various stunts during his tenure at stations in Baltimore and Seattle.  So it was relatively easy for him to get some airtime for his holiday parodies in the markets where he had connections.  One track in particular you may have heard:  “The Twelve Pains of Christmas,” which chronicled a dozen things about the holiday season that drove Rivers crazy, caught fire and was soon getting airplay all over the country.

Rivers’ creations came in two primary formats:  A) He was most successful when he wrote funny and irreverent lyrics to existing Christmas music; and B) He also took well-known rock songs and replaced the real lyrics with holiday-themed words.  Taken together, he has assembled a pretty decent collection of hilarious parodies to keep us all chucking through the sometimes stressful Yuletide season.

Here’s a tip to you music fans:  Readers who subscribe to Spotify will be able to listen to the full set list I have compiled of Rivers’ best parodies, which can be found at the bottom of this post.  Readers who are not subscribers will still be able to hear short excerpts of each track.

The following are examples of my favorites from Format A.

To the tune of “Walkin’ in a Winter Wonderland,” a saucy take on cross-dressing:

To the tune of “God Rest Ye Merry Gentlemen,” a spoof about a man who’s the victim of a practical joke:

To the tune of “Do You Hear What I Hear?,” a lament about getting the same old gifts year after year:

To the tune of “O Come All Ye Faithful,” a tribute to those hardcore fans known as Deadheads who worship their band as they follow from city to city:

To the tune of “The Christmas Song,” a skewering of the classic cartoon characters, Alvin and the Chipmunks:

“Chipmunks roasting on an open fire, hot sauce dripping from their toes, Yuletide squirrels fresh-fileted by the choir, they poked hot skewers through their nose, everybody knows, some pepper and a garlic clove help to make them seasoned right, tiny rats with a crisp golden coat will really hit the spot tonight…”

To the tune of “Sleigh Ride,” an amusing song of sympathy for those who come down with a flu bug over the holidays, sung by someone channeling Karen Carpenter :

“Just hear those noses sniffling and sore throats are tickling too, come on, it’s lousy weather to be suffering inside with the flu, outside the snow is falling, your fever’s at a hundred and two, let’s take some Alka-Seltzer and a box of antihistamines too… My glands are puffed and swollen and every hour I pee, my throat’s as rough as leather and raspy as it can be, let’s take some kleenex with us and sing a carol or two, we’ll make our noses redder on a sleigh ride to go with the flu…”

To the tune of “It’s the Most Wonderful Time of the Year,” a reminder to watch out for the calorie intake during the coming season:

To the tune of “Deck the Halls,” a heavy metal diatribe against the crass commercialization of the holidays:

To the tune of “We Wish You a Merry Christmas,” a rude kiss-off to house guests who wear out their welcome:

To the tune of “Carol of the Bells,” a choir admonishes us not to drink and drive this holiday season:

To the tune of “Santa Claus is Comin’ to Town,” a Bruce Springsteen impression that hints Santa might be offering more than just presents to the ladies he drops in on:

Format B is less consistently funny, but there are still some clever ones:

To the tune of The Beach Boys’ “Good Vibrations,” a holiday lights enthusiast explains his passion:  “Ah, I love the colored lights every year, snd the way  the neighbors stop their cars and stare, ahh, strap a Santa Claus on my roof, plastic candy canes and reindeer everywhere, I’m stringin’ up decorations, it’s strainin’ the power station, fake icicle light formations imported from third-world nations, I’m stringin’ up decorations, I’m freakin’ out fire stations, I’m sending out radiation, my neighbors are out of patience…”

The words to “Twas the Night Before Christmas” are made to fit into a rendition of Nirvana’s “Smells Like Teen Spirit.”

The words to “O Little Town of Bethlehem” happen to fit perfectly into the phrasing for The Animals’ “House of the Rising Sun.”

To the tune of Black Sabbath’s “Iron Man,” an Ozzy Osbourne soundalike claims, “I am Santa Claus!”

To the tune of The Rolling Stones’ “Get Off My Cloud,” a homeowner shouts at Santa, saying, “Hey, You!  Get off of my house!”

To the tune of Jimi Hendrix’s “Purple Haze,” a harried man rushes by, saying, “‘Scuze me, I’ve got gifts to buy!”

To the tune of The Beatles’ “All You Need is Love,” Santa explains how he makes all those gifts:  “It’s easy, all you need is elves…”

To the tune of Barry Mann’s “Who Put the Bomp?,” an outrageous look at why you don’t want to be the angel on top of the Christmas tree:  “Who put the stump in my rump-ba-bump-ba-bump, who took and jammed it in my rama-lama-ding-dong, who stood the wood where I poop she-poop-she-poop, who put the stick up my hip-dee-dip-dee-dip, who was that man, he shoved it up my can, and left me stranded on this Christmas tree…”

And finally, let’s not forget the one that started it all for Rivers, “The Twelve Pains of Christmas,” which builds in intensity as each new pain is listed, and the singers get more and more exasperated:  “The twelfth thing at Christmas that’s such a pain to me:  singing Christmas carols, stale TV specials, batteries not included, finding parking spaces, whiny kids, the Salvation Army, facing my in-laws, five months of bills, sending Christmas cards, hangovers, rigging up the lights, and finding a Christmas tree!”

A very Merry Christmas to all my readers!