When I moved to Los Angeles in August 2011, I got in my car and started exploring the streets, the beaches, the tourist attractions and the famous landmarks that are mentioned in so many songs I listened to as a kid growing up in far-away Ohio. 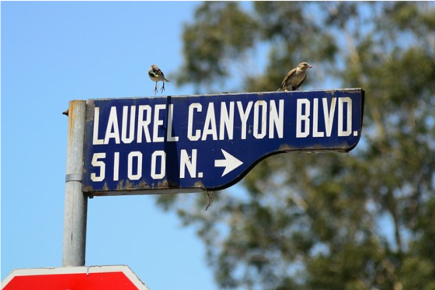 One afternoon, I found myself on Sunset Boulevard, heading toward one of the nation’s meccas for every music lover and album buyer, Amoeba Records.  Sitting at a light, I looked at the street sign and realized I was at the base of Laurel Canyon Boulevard.  Wow, I thought, Laurel Canyon.  So much rock history there!

The main thing I recall reading about Laurel Canyon was how Joni Mitchell lived in a rustic cottage there in 1969, and shared the place for a while with Graham Nash.  They wrote many of their wonderful early songs there, including Nash’s “Our House,” specifically about the idyllic home life they nurtured there as one of counterculture’s better-known couples.

I turned left and headed up the winding road in hopes of getting a taste for what the Laurel Canyon community was all about.  I pictured some sort of woodsy Shangri-La where hippie types strummed guitars on front porches, waving and welcoming passersby in for tea and a hit off the hash pipe.

How silly of me to expect that more than 40 years later.  That was then, this is now.

Laurel Canyon Boulevard today is a very busy, overtaxed roadway that brings way too much traffic up and down the canyon connecting the San Fernando Valley with West Hollywood.   Like other canyon roads that snake through the Santa Monica Mountain range and the Hollywood Hills, Laurel Canyon can be a peaceful exception to the hustle-bustle of the rest of “El Lay,” especially if you turn onto the dead-end side streets that delve even deeper into the lush greenery.  But on the main thoroughfare, the long slow line of cars driven by impatient residents and valley commuters have little patience for swivel-headed tourists who dawdle and gawk, wondering where the peace-and-love musicians have gone.

From the mid-’60s into the early ’70s, an inordinate number of game-changing musicians 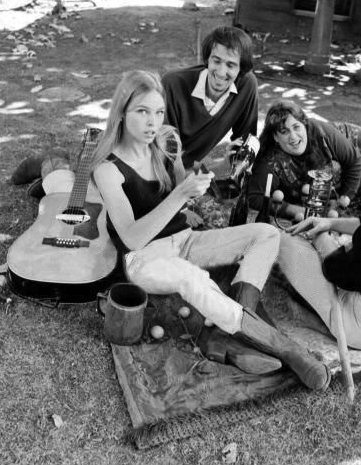 The Mamas and The Papas

whose songs represented “the California sound” called Laurel Canyon home, even if only briefly.  The Byrds (Roger McGuinn, Chris Hillman and David Crosby) ruled the roost for a spell, as did John & Michelle Phillips of The Mamas and The Papas.  John Densmore and Jim Morrison of The Doors lived there, as did Buffalo Springfield (Stephen Stills, Richie Furay and Neil Young).  Bands like Canned Heat and Love were residents, as were Peter Tork and Mickey Dolenz of The Monkees.  Even iconoclast Frank Zappa of The Mothers of Invention made his home in the Canyon for a while.

Carole King, who had first gained fame as a Brill Building songwriter in New York with husband/partner Gerry Goffin, moved to Laurel Canyon in 1970, where she wrote the songs that would end up on her exceptional “Tapestry” album, a defining record of the ’70s and, for a while, the best selling record in history.

John Mayall, pioneer of the British blues movement, moved to L.A. in 1968 in the wake of the breakup of his band The Bluesbreakers, and recorded and released “Blues From 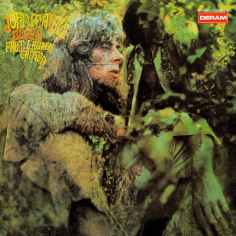 Perhaps most famous of the Laurel Canyon crowd was Mitchell, the Canadian singer-songwriter whose third LP, “Ladies of the Canyon,” was written there in 1969-1970.  The title song describes the innocent waifs and sturdy Earth mothers who inhabited the community at the time:  “Vine and leaf are filagree, and her coat’s a second-hand one, trimmed in antique luxury, she is a lady of the canyon…  For her home, she gathers flowers, and Estrella, dear companion, colors up the sunshine hours, pouring music down the canyon…”

The Doors’ 1968 tune “Love Street” (from their #1 LP “Waiting For the Sun”) is Morrison’s nickname for Laurel Canyon Boulevard.  He also references the Laurel Canyon Store, a

general-store hangout that still exists today:  “She lives on Love Street, lingers long on Love Street, she has a house and garden, I would like to see what happens…  I see you live on Love Street, there’s this store where the creatures meet, I wonder what they do in there…”

Long before this group of musicians descended on the area, Laurel Canyon had been an escapist place, a magical-forest part of Los Angeles where the noise and smog didn’t seem to penetrate.  Hollywood actors in the ’30s, ’40s and ’50s found privacy there, a safe haven in which to conduct private trysts and experiment with drugs, away from the prying eyes of the paparazzi’s cameras.

In “Canyon of Dreams:  The Magic and the Music of Laurel Canyon,” an exhaustive history and exploration published in 2009, author Harvey Kubernik offers this

description:  “It was the place where you ran away from your parents, hid from authorities, wrote music, books, screenplays, hung out with bands, chart-toppers and pretenders.  The music it gave birth to — before swollen egos and swollen nostrils brought a heavy rain down — somehow still informs the soundtrack of our lives.”

In the book’s foreword, Ray Manzarek, keyboardist of The Doors, said, “There was always some kind of magic afoot in that Canyon.  The light and the sun infused that zone with a sense of joy.  There was always something spiritual about that slice through the green earth, but never more so than in the ’60s.  We had become the new tribe, and it felt as if we were spreading the message of (dare I say it today) love to a new world.”

Danny Hutton of Three Dog Night arrived in Laurel Canyon back in 1964 and never left,  raising a family, tending a garden, and becoming a stalwart of the community.  Today, he boasts the unofficial title of ambassador of the canyon.  “Everyone has this thing about Laurel Canyon.  It’s a mythical place for most people.”

The Wallflowers’ Jakob Dylan, son of legendary tunesmith Bob Dylan, has always been intrigued by the aura of Laurel Canyon’s rock ‘n roll heyday.  In 2015, he staged a concert with Beck, Fiona Apple and other musicians to pay tribute to the music of that place and 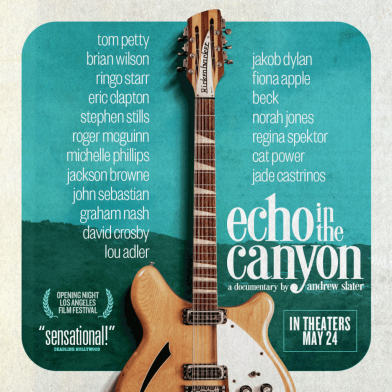 time.  He then collaborated with producer Andrew Slater to conduct interviews with some of the key players of that era — David Crosby, Michelle Phillips, Brian Wilson, Stephen Stills, Jackson Browne, Roger McGuinn, Eric Clapton, Graham Nash, even Ringo Starr and producer Lou Adler.  He also spoke at length with Tom Petty (his final interview before his death) about how the songs and sounds born in Laurel Canyon had a profound influence on him and other contemporaries.

The result is a documentary of sorts called “Echo in the Canyon,” which is currently making a splash in cinema houses around the country.  It’s kind of disjointed, woefully incomplete and flawed, in my opinion, but for people of my generation, “Echo in the Canyon” is a fun and invigorating 82 minutes well spent.  For younger generations, or those who aren’t hip to the influences and inspirations of the Laurel Canyon story, it will no doubt be an eye-opening experience. 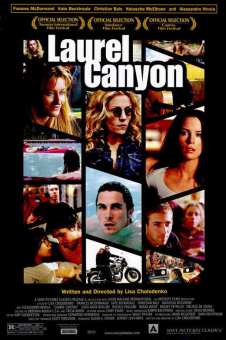 Canyon” starring Frances McDormand, Christian Bale and Kate Beckinsale that is well worth your time as well.  Said director Lisa Cholodenko:  “My film editor and I were listening to music one day, and had brought in that Joni Mitchell album, ‘Ladies of the Canyon.’  I used to love that record. We listened to it, and started talking about what the Laurel Canyon scene must have been like in the late ’60s-early ’70s.  I thought it would be fun to set a movie in that scene but changed to a modern context. And I just took it from there.”  It’s a quirky piece of fiction set in the Canyon that focuses on the evolving relationship between a hippie-type mother and her more conventional son and daughter-in-law as they explore sexual tensions and generational differences.

Photographer Henry Diltz, one of rock photography’s most respected figures, has captured hundreds of photos of Laurel Canyon and its most celebrated musical practitioners.  One such photo appears on the iconic album cover for the debut LP “Crosby, Stills and Nash,” which was taken in West Hollywood, only a stone’s throw from Laurel Canyon.  Another is the wonderful shot (below) of Joni Mitchell leaning out the 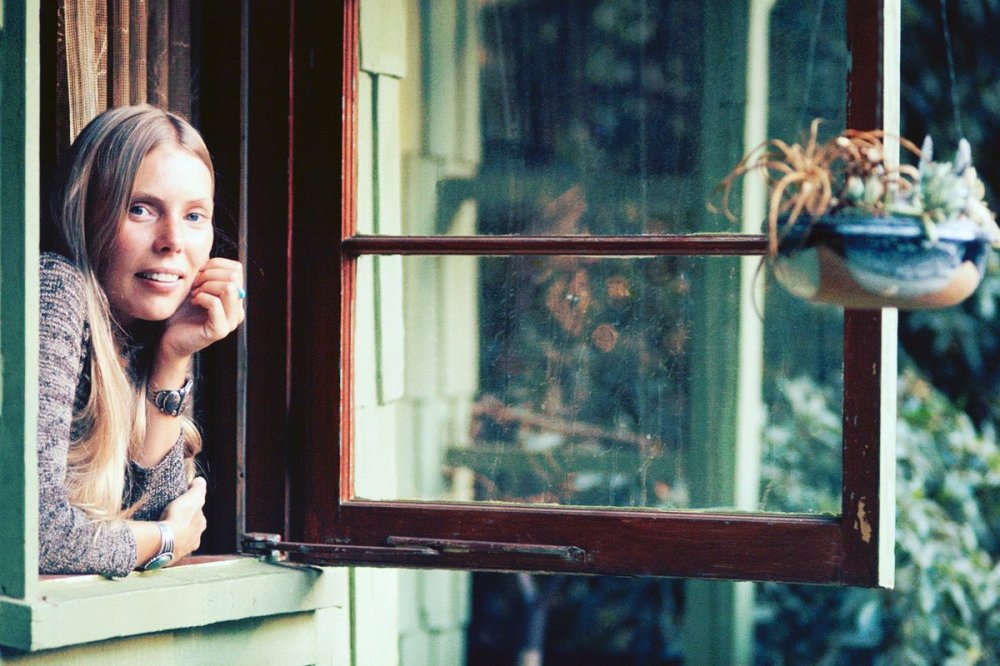 window of her Laurel Canyon cottage.  “I really admired these people and their amazing music, and I felt honored to photograph them in their milieu.  We are still close friends to this day.”

The Spotify play list below includes songs referred to in this essay as well as recordings from the “Echo in the Canyon” film soundtrack.