On the face of it, it really makes no sense. 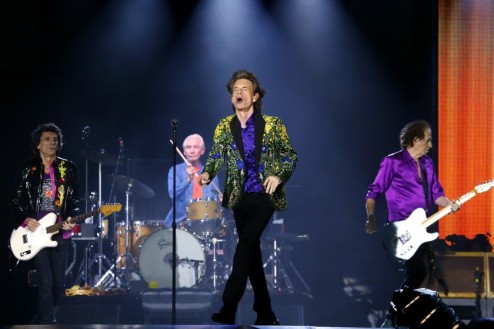 aerobics workout while leading his band of septugenarians through a kickass two-hour performance of classic rock and roll?

I saw it, along with 60,000 other Rolling Stones devotees at the Rose Bowl last week, but I wasn’t quite believing what I was seeing.

(Let’s get my age-related joke out of the way right here:  At the merchandise booths before the show, alongside the tongue-and-lips t-shirts and hoodies, I was almost expecting there would be Rolling Stones walkers and canes for sale.  Boom!  I’ll be here all week…)

Seriously, though, if I were Mick Jagger’s doctor, I’m not so sure I would have given him the green light, following heart surgery only three months earlier, to run relentlessly across the stage like the 25-year-old he isn’t anymore.  Then again, Jagger is and has always been his own man, and I don’t imagine he needs anyone’s permission to do whatever he wants, even if it’s just to go down to the Chelsea Drug Store to get a prescription filled.  Clearly, he loves to perform, he wants to perform, and he is still very good at it, so he WILL perform, whether it’s as a street fighting man, a man of wealth and taste, or as a man stuck between a rock and a hard place.

As for his Glimmer Twin, the indestructible human specimen called Keith Richards, he too has the rock and roll gene buried deep in his DNA, but he appeared far less enthusiastic about the need to continue going through his paces on stage.  He was smiling now and then, and just might have been enjoying himself, as he chipped in some

monster guitar chords just when you thought he might doze off.  But for much of the night, he seemed bored and uncaring, and more than happy to turn over most of the guitar duties to his younger teammate, the 71-year-old Ronnie Wood.

And wow, what a 180-degree difference!  I went home from the show with a revived respect for Wood’s contributions to this band.  He did almost all of the heavy lifting, from some inspired slide guitar playing to quicksilver lead guitar runs, all the while demonstrating an impish playfulness in the way he carried out his assignments.  Not to mention, he’s a lot easier on the eyes than Richards, who looks these days as if he’s wearing a rubber mask that was left out in the sun too long.

Drummer Charlie Watts, meanwhile, was… well, critic Chris Willman from Variety put it beautifully:  “He’s still our darling, sitting at a minimalist kit and moving even more minimally with his casual jazz grip, looking like the mild-mannered banker who no one in the heist movie realizes is the guy actually blowing up the vault.”  The 78-year-old guy didn’t appear to even break a sweat as he unfailingly laid down the beat for 20 Stones classics for more than two hours.  Me, I get winded going up a few flights of stairs.

At a stadium show like this one, most people are so far from the stage that they can barely see the performers, and if not for the four truly astounding visual screens that hung behind the stage, they wouldn’t know for sure it was the actual Rolling Stones and not some paid actors.  I

don’t know who the art director is who was responsible for the spectacular graphics and visual content of these displays, but if you ask me, he should be paid as much as Jagger and Company.  The audience (unless you were those fortunate few in the first 30-40 rows) spent the entire evening watching the concert via the screens, and believe it or not, this was not a bad thing.  Unlike the simplistic, average-quality visuals I’ve been forced to watch at many other stadium shows, these were state-of-the-art, presenting the four featured players in as favorable a light as you could possibly imagine.

The camera people didn’t neglect the other musicians who added significant parts to The Stones’ live stage presentation.  Darryl Jones, who has been handling the bass guitar parts in the touring band since original member Bill Wyman’s departure in 1994, had several moments in the spotlight, most notably as he carried the day on an extended rendition of “Miss You.”  Similarly, veteran keyboardist Chuck Leavell, who has toured with not only the Stones but also The Allman Brothers for decades now, offered some integral piano work on crowd-pleasing selections like “She’s a Rainbow” and the anthemic “You Can’t Always Get What You Want.”

Most photogenic, though, was 37-year-old Sasha Allen, making her debut appearance in place of long-time touring vocalist Lisa Fischer to belt out backing vocals and, most significantly, the Merry Clayton vocal solo during “Gimme Shelter,” which still sounds as threatening and chilling as the original did 50 years ago.

Those uber-professional screens, by the way, proved to be far better stage accoutrements 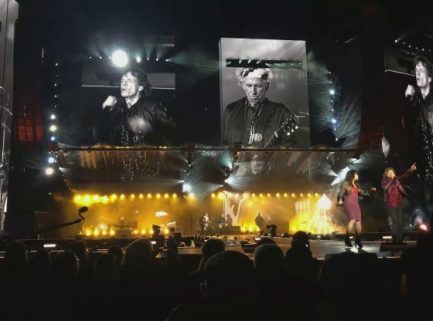 than the silly cherry pickers and inflatable penises The Stones previously trotted out as concert spectacles.  I had been a witness to both of these laughable visual props at the 1981 “Tattoo You” arena tour and the 1989 “Steel Wheels” stadium tour, respectively, and I can tell you I would have much preferred these quality screen shots of the band members doing their thing.

While the visual presentation is always important (why else go to a concert in the first place?), equally crucial is the song list the band decides to perform.  Most classic rock bands still out there on the road have chosen to play it safe by limiting themselves to the hits everyone supposedly came to hear, and in that regard, The Stones did indeed stick to the tried-and-true standards.

I look at the Stones’ music in four distinct eras.  First there’s the early years (1963-1967), from their humble beginnings covering old blues tunes through their first attempts at writing their own songs, some of which become huge Top 40 hits in the UK and the US alike.  From that period, they offered three tunes at the Rose Bowl show:  the vaguely menacing “Paint it Black,” the flower-power curiosity “She’s a Rainbow” and the most durable war horse of their whole catalog, “(I Can’t Get No) Satisfaction.”

Then, there’s the glory years, from their “Beggar’s Banquet” LP in 1968 through “Exile on Main Street” in 1972.  This is when The Stones were truly “the greatest rock and roll band in the world,” especially in the studio, writing and recording some of the most amazing music in rock history.  This period was, as expected, broadly represented at the Pasadena show:  “Street Fighting Man,” “Sympathy For the Devil,” “Jumpin’ Jack Flash,” “Gimme Shelter,” “You Got the Silver,” “Honky Tonk Woman,” “Midnight Rambler,” “You Can’t Always Get What You Want,” “Brown Sugar,” “Dead Flowers,” “Sweet Virginia” and “Tumbling Dice.”

It was during “Midnight Rambler” that Jagger whipped out his harmonica and helped make that song the winner of my “best moment of the evening” contest, although it won by only a fraction over a mesmerizing, hypnotic “Sympathy for the Devil.”

The third era of Stones music I’ll describe as the erratic years, when the group’s records meandered between average ambivalence (“Goat’s Head Soup,” “Black and Blue”) and meaty masterpieces (“Some Girls,” “Tattoo You”), and this wild swing in quality was a frustrating time for Stones fans.  From this period (1973-1986), last week’s show included only three selections:  The not-to-be-denied disco stomp “Miss You,” Richards’ defiant “Before They Make Me Run” and their final #1 hit single, 1981’s “Start Me Up.”

The fourth era, if you can even call it an era, is everything from 1989 to the present.  It’s a pretty lame 30-year stretch that included just four LPs, and only one of those (“Steel Wheels”) was anywhere close to the high standards they’d laid down in their best days.  Not surprisingly, we heard only one track from this period, the so-so “You Got Me Rocking.”  (Wouldn’t “A Rock and a Hard Place” have been a better choice?)

When you analyze the setlist in this way, it’s clear to see that The Rolling Stones in 2019 choose to present themselves pretty much as The Rolling Stones of 1969 or so, concentrating on the finest songs they ever wrote.  And why not?  I mean, hey, if they’re going to continue to tour well into their 70s, they might as well put their best cards on the table.  The audience, largely made up of longtime fans also in their grey-haired years, wants to hear the songs they know and love best.

Me, I’m a rock writer and veteran rock-concert attendee, and I would’ve frankly preferred to hear a few more of the less obvious choices. I guess they did go out on a limb when they moved down the catwalk to sit down and try their hand at “unplugged” tunes like “Sweet Virginia” and “Dead Flowers.”  But I don’t know, it seems to me they could have taken a chance or two with the set list during the meat of the program. Maybe drop “Honky Tony Woman” and make room for “Monkey Man” or “Can’t You Hear Me Knockin’.”  Or even go deep and offer up “Respectable,” or “Too Much Blood,” or “Slave.”

Understand, I’m not complaining.  It was fun to hear Jagger make references to L.A. landmarks and neighborhoods like “Thursday night’s turtle races at Brennan’s” (in Marina Del Rey), or unsuccessfully searching for their star on Hollywood Boulevard (inexplicably, there isn’t one, guys), or being unable to get a reservation at Spago’s (it’s been closed since 2001).  And we were all reminded of our mortality when he said it has been 55 years since The Stones’ first Los Angeles concert, and 25 years since they’d last played the Rose Bowl.

I was thoroughly entertained, and who knows if these guys will still have enough in the tank to show up in town again four or five years from now for another go round.  If so, I suspect I’ll be here, “just waitin’ on a friend.”

The Spotify playlist below offers the songs from the August 22nd Rose Bowl show in the order they were played, followed by a few other gems from their catalog I would have loved to have heard…