You had your diehard rock fans who preferred the mainstream, power-chord rock of Springsteen, Seger, Heart and Aerosmith.  Emerging from the left end of the dial came the punk sounds of The Clash, Talking Heads, The Ramones and Elvis Costello.

And yet, there was at least one band that found a way to straddle that fence and please both audiences.  That band was The Cars.

“We were walking a fine line, and it contributed a great deal to the success of the band,” said guitarist Elliot Easton in the liner notes of The Cars’ excellent 2-CD anthology “Just What I Needed” (1995).  “The Cars would have that one record in a punk rocker’s collection that was a just a little right of center.  And it might be that one record for mainstream fans who thought they were being really punky.  We managed to span those two audiences.  It’s not something you can calculate, just that we had the songs.  And we really had great songs.”

From 1978 to 1988, The Cars graduated from small clubs to arenas, released six LPs (four of which reached the Top Ten) and had a dozen or more Top 40 singles, all the time finding the musical formula that satisfied the palettes of punkers and rockers alike.

The key ingredient in that success was the uncanny songwriting talent of their frontman, Ric Ocasek, who wrote 75% of the group’s repertoire and served as lead vocalist and rhythm guitarist.  Influenced by Beat poets as well as the pioneers of rock ‘n roll, Ocasek cranked out smart, literate, accessible songs, and the band recorded and performed them  with more polish and style than most bands on the circuit at that time.

Ocasek died this past week “suddenly and unexpectedly” of heart failure in his Manhattan apartment while recuperating from surgery.  Supermodel Paulina Porizkova,

Ocasek’s wife of 28 years until their amicable split last year, said she found him dead upon bringing him his Sunday morning coffee.  The couple’s two sons, Jonathan and Oliver, were also present.  He was either 70 or 75 — there are conflicting reports of his age, although The New York Times and other reputable sources say he was born in 1944, and died at 75.  Not that it much matters.  Ocasek is gone, and his music lives on.

Three-chord rockabilly, New Wave synth-pop, echoes of The Beatles, avant-garde art rock, surf music, punk and glam rock — you can hear all of these genres in a single Cars tune, or certainly on any given Cars album.   In his induction speech on The Cars’ behalf at the 2018 Rock and Roll Hall of Fame ceremonies, Brandon Flowers of the Killers described the band this way:  “They were a slick machine with a 340 V8 under the hood that ran on synergy, experimentation and a redefined cool.  They had it all: the looks, the hooks, Beat romance lyrics, and killer choruses.”

Ocasek and his bandmate Benjamin Orr (born Orzechowski) met in high school in Cleveland in the late ’60s and formed a musical bond that took them to Columbus, Ohio, 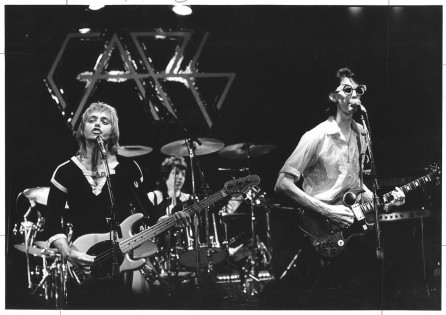 and Ann Arbor, Michigan in various groups before relocating to Boston by 1972.  They tried their hand as an acoustic twosome, then formed a country-folk-rock band called Milkwood and released one album, selections of which you can hear on the Spotify playlist below.  It’s interesting to contemplate:  What if Milkwood’s CSN-inspired harmonies and arrangements had caught on?  Would Ocasek and Orr have stayed in that groove instead?  Knowing Ocasek’s penchant for experimentation, it seems likely he would’ve gravitated toward the quirkier hybrid music of The Cars anyway.

With Gregg Hawkes on keyboards, Easton on lead guitar, David Robinson on drums and Orr now playing bass, The Cars were born in 1977 and signed to Elektra Records.  Ocasek’s songs were usually curt but catchy, laced with Easton’s prominent guitar lines and Hawkes’s intriguing keyboard hooks.  Thanks to Roy Thomas Baker, the accomplished producer behind Queen’s finest albums, the tracks on The Cars’ debut

album took on a professional sheen that deftly mixed the group’s elements into an irresistible sound that captured many listeners from the get-go.

Truth be told, I was a traditional rocker who found the chaos of punk a bit too noisy and unmusical, so I was reluctant to accept The Cars’ punk-flavored tunes at first.  But I heard them perform in one of the “World Series of Rock” concerts in Cleveland in 1978 with Fleetwood Mac, Bob Welch, Todd Rundgren and Eddie Money (who, coincidentally, also died this past week), and that was enough to make me pay them at least grudging respect.

TV talk show host Stephen Colbert, a discerning rock music critic as well, was a huge fan of The Cars from the beginning, and he paid tribute to Ocasek on his late-night program the other night.  “That first Cars record is packed with hits like peanuts in a Snickers Bar,” he said.  “I think that album and ‘My Aim is True’ by Elvis Costello were two of the greatest debut pop albums of all time.  In 1978, Ocasek was already 34 years old when their first album came out.  He had put in the hours.  His music — he wrote everything for The Cars — his music was the soundtrack of my high school.”

It’s true, that first album was so chock full of radio hits — “Just What I Needed,” “My Best Friend’s Girl,” “Good Times Roll,” “Bye Bye Love,” “You’re All I’ve Got Tonight” — that I couldn’t help but warm up to them — eventually.   And The Cars kept motoring along

But it really took me until their fifth and most successful album, 1984’s “Heartbeat City,” to fully appreciate The Cars’ real accomplishment:  connecting the cynical cool of new wave with a timeless AM-radio spirit, putting an ironic spin on well-worn rock ‘n roll catch phrases like “let’s go,” “got a hold on you,” “shake it up,” “let the good times roll,” “all I want is you.”

“Heartbeat City” contained four Top 20 hits, including “You Might Think,” “Hello Again,” “Magic,” and their highest charting single, “Drive.”  The shimmer of that song, written and sung by Orr, is somewhat atypical of The Cars, with lyrics that take a sober look at

the self-destructive behavior of the singer’s girl.  It was during filming for the music video of “Drive” when Ocasek met Porizkova, who played the part of the strung-out girl.

The Cars’ sixth LP, 1987’s “Door to Door,” managed to reach only #27 on the charts, and Ocasek concluded that he had grown tired of touring, and pulled the plug on the band he’d founded.  Many years later, in an NPR interview, he explained he’d never really intended to wind up in the spotlight.  “I’m not much into being the front guy,” he said.  “I was the songwriter, really — the person who put the songs together, and maybe a bit of a director.  But being an entertainer was never my main thing.”

As for the songwriting part of it, Ocasek said, ““I’m happy that I’ve been able to write pop songs that have a bit of a twist.  When I’m writing, I never know how it’s going to come out.  I don’t think, ‘Well, I’ve done a catchy one, now I can do a weird one.’  Our albums clearly had some of each, but it wasn’t really intended that way.”

If you’re looking for “weird” songs in The Cars’ repertoire, you might look at “Shoo Bee Doo” from 1979’s “Candy-O,” or “A Dream Away” from 1982’s “Shake It Up.”  Better yet, start with “Moving in Stereo” from the debut album, which was never released as a single but got plenty of FM-rock radio attention.  Interestingly, its instrumental section, carried by Hawkes’ keyboards, was used in scenes from the 1982 film “Fast Times at Ridgemont High” and the current Netflix hit show “Stranger Things.”

Following The Cars’ breakup, Ocasek stayed active with several solo LPs (actually, his first two solo projects came during The Cars’ active period — 1982’s “Beatitude” and 1986’s “This Side of Paradise,” which both reached the Top 40 on the album charts), but his later efforts failed to chart.  Orr similarly tried a few solo albums, but then protracted pancreatic cancer and died in 2000.

Easton and Hawkes, with Ocasek’s blessing but not his participation, recruited Todd Rundgren and Utopia cohort Kasim Sulton to tour under the banner The New Cars in 2005, performing classic Cars tunes as well as a handful of Rundgren’s material.

In 2011, Ocasek capitulated and reunited with Easton and Hawkes to release “Move Like 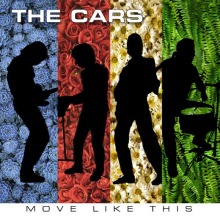 This,” which captured some of the vibe of earlier Cars music and even reached #7 on the album charts, even sparking a brief US tour.  But the magic didn’t last.  “On about half the new songs, I felt Ben (Orr) would’ve sung them better than I did.  In the liner notes, we said so:  ‘Ben, your spirit was with us one this one.'”

When The Cars were inducted in the R&R Hall of Fame in 2018, Ocasek cooperated, performing with Easton and Hawkes, and they brought in Scott Shriner of Weezer to play bass.  Said Ocasek at the podium that night, “I was never big on trophies and all that, but all things considered, I’d rather be in the Hall of Fame than not.”

Whether or not the adulation was important to Ocasek, there are many bands eagerly willing to reference The Cars as key influencers.  Here are just a few:

“The Cars are a big part of my musical love affair,” said Carnie Wilson of Wilson Phillips.  “Ric was amazing and will be missed. The music of The Cars will inspire people and move people forever.” 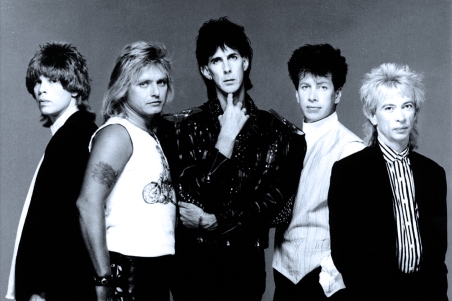 Michael Peter “Flea” Balzary of the Red Hot Chili Peppers wrote, “Ahh man, say it ain’t so. I loved Ric Ocasek. What an interesting, smart, kind, funny man who made incredible records. I loved those Cars albums when I was a teenager. Perfect pop songs with those wicked Elliot Easton guitar solos. Absolute candy.  As an adult, I met him several times and he was gracious, funny and engaging.  Ahh man.  Ahh damn…”

The first three tracks, from Ocasek’s and Orr’s earlier band Milkwood, are a revelation for any fan of The Cars.  What follows is my list of the band’s best tracks.