“The harmonica is the most voice-like instrument.  You can make it wail, feel happy, or cry.  It’s like singing without words.” — Bluesman Charlie Musselwhite

Who knew that one of the most expressive instruments in the annals of rock music got its start in ancient China?

Have you ever heard of the sheng?  Me neither.  As one of the first free-reed wind instruments ever devised, it happens to be the precursor of the harmonica, also known as the mouth harp, or French organ, or blues harp.

The harmonica, as we know it today, was invented in Germany in the early 1800s.  It

migrated to America in the 1850s and, because of its relative simplicity and affordability, was quickly adopted and widely used in American folk music.  Almost anyone could play a harmonica, almost anytime or anywhere.  Indeed, even Abraham Lincoln was known to keep one in his pocket.  He once said, “Sometimes I think I’m happiest when I’m sitting on my porch playing my harmonica.”

By the 20th Century, the harmonica became an important part of country-western music, and the blues, and folk music.  It should probably come as no surprise that when rock and roll arrived in the mid-1950s, the harmonica came along for the ride.

Whether it’s played in a slow drawl or a frenetic double-time, the mouth harp can create a musical mood unlike any other instrument.  It’s suitable for a gentle acoustic arrangement or a rockin’ blues band at full tilt, and the best mouth harp players are capable of handling both environments.

In the Spotify playlist at the end of this post, you’ll find a sampling of the work of the artists who have been rated as the best harmonica players of the past 50 years.  Let’s take a look at who they are: 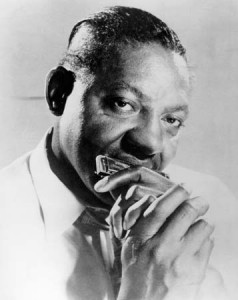 Delta bluesmen like Sonny Boy Williamson, Muddy Waters, James Cotton and Marion “Little Walter” Jacobs set the standard and forged new trails in the use of the harmonica in classic ’50s and ’60s blues tracks like “Bring It On Home,” “Hoochie Coochie Man,” “Don’t Start Me to Talkin’,” “Mean Ole Frisco,” “Key to the Highway” and “Roller Coaster.”  They went on to inspire dozens of up-and-coming mouth harp artists like Britain’s blues titan John Mayall, and Keith Relf of The Yardbirds, and Chicago blues wunderkind Paul Butterfield and Canned Heat’s Alan Wilson.

King of the jazz harmonica players was the great Toots Thielemans, the Belgian-American who performed and recorded with everyone from Benny Goodman to Quincy Jones.  You can also hear his work on such well known pop pieces as the 1969 “Midnight Cowboy” soundtrack theme and the 1984 Julian Lennon hit “Too Late for Goodbyes.”

Meanwhile, in Nashville, harmonica greats like session wizard Charlie McCoy were in high demand, inserting expert harp solos on many dozens of tracks by the leading artists of the day, from Johnny Cash and Buck Owens to Willie Nelson and Dolly Parton.

Folk music may be the genre through which the harmonica reached the widest audience, 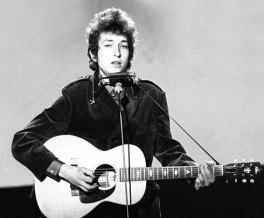 thanks to Bob Dylan, who was inspired by the harmonica playing of the Memphis Jug Band, Woody Guthrie and John P. Hammond.  Beginning in 1962, Dylan used a harmonica mounted on a neck rack, which allowed him to play it and an acoustic guitar simultaneously.  Many of his early anthems — “Blowin’ in the Wind,” “Don’t Think Twice, It’s All Right,” “The Times They Are A-Changin'” — showcased prominent (albeit rudimentary) harmonica passages.  Dylan continued to use harmonica selectively in the ’60s (“I Want You”), the ’70s (“Tangled Up in Blue”) and the ’80s (“Every Grain of Sand”) as well.

Over in England, a Liverpudlian named John Lennon took notice of the harmonica, particular the way Dylan used it.  Prior to The Beatles’ arrival on American shores, the band’s debut single on the British charts was “Love Me Do,” which put Lennon’s harmonica front and center.  And the band’s next hit single, the #1 “Please Please Me,” also featured the harmonica in key moments of the arrangement.  In the 1964 smash film “A Hard Day’s Night,” Lennon’s mouth harp completely dominates the recording of “I Should Have Known Better.”  Later, on his solo albums, Lennon occasionally added a harmonica lick here and there (“Oh Yoko” on the “Imagine” LP).

In Detroit, a blind child prodigy named Stevland Morris had wowed the key people at Motown Records, who dubbed the 12-year-old “Little Stevie Wonder” because of his multiple talents.  Said Wonder many years later, “I never imagined I’d ever meet (Motown chief) Berry Gordy.  When I did, he told me, ‘You know, your singing’s okay, but I like your harmonica playing better.’”  Sure enough, his first appearance on the charts in 1963, an amazing live performance called “Fingertips,” was a tour-de-force that stressed his harmonica abilities over his vocals. 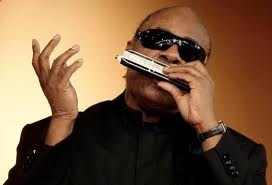 In fact, it was only the tip of the iceberg, as Stevie Wonder emerged as one of the finest harmonica players of his age, from his ’60s hits like “I Was Made to Love Her” and “For Once in My Life” to ’70s staples like “Isn’t She Lovely,” “Too High,” “That Girl” and “Boogie On Reggae Woman.”  Just as important were his many guest harmonica solos on the recordings of others, like James Taylor’s “Don’t Be Sad ‘Cause Your Sun is Down” (1976), Elton John’s “I Guess That’s Why They Call It the Blues” (1982), The Eurythmics’ “There Must Be an Angel” (1985) and Dionne Warwick’s “That’s What Friends Are For” (1991).

In the rock music world, the harmonica has been a celebrated component of some of the genre’s biggest names: 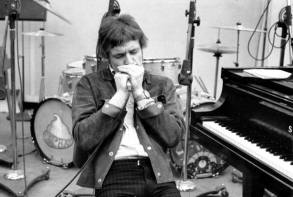 Jack Bruce, Cream’s bass player and lead vocalist, was also a virtuoso on harmonica, as heard on the 7-minute live recording “Traintime” from their #1 LP “Wheels of Fire.”

Steve Miller plays a mean harp on such vintage tracks as 1968’s “Living in the U.S.A.”

On The Doors’ blues stomper, “Roadhouse Blues,” that’s The Lovin’ Spoonful’s John Sebastian chipping in with a great harp solo.

Mick Jagger offers some mean licks on “Midnight Rambler,” the great Rolling Stones track from 1969’s “Let It Bleed” (as well as the live “Get Yer Ya-Yas Out” LP).  The Stones also invited the great blues harps man Sugar Blue to contribute to monster hits like “Miss You” and “Emotional Rescue.”

Robert Plant belts out some earthy blues harp on early 1969 Led Zeppelin songs like “I Can’t Quit You Babe” and “Bring It On Home,” as well as on the seismic 1971 track, “When the Levee Breaks.” 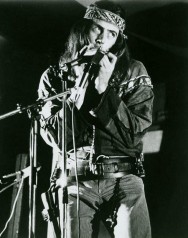 The aforementioned John Mayall must be singled out for his incredible mouth harp work on the 1969 song “Room to Move,” the most well-known of dozens of harmonica-laden songs in his voluminous catalog.

Allan Clarke, co-founder and lead vocalist of The Hollies, also played harmonica, which was featured most famously on their Top Ten hit, “He Ain’t Heavy, He’s My Brother.”

Richard “Magic Dick” Salwitz of J. Geils Band is widely praised as a ferocious mouth harp player, and you can hear him wailing away on studio and live versions of tracks like “Lookin’ for a Love,” “Homework” and especially “Whammer Jammer.”

Tom Johnston of The Doobie Brothers had a way of making a harmonica sound like a locomotive chugging down the tracks, which came in very handy on the group’s 1973 #1 hit “Long Train Runnin’.”

Neil Young‘s early work is full of songs that feature his aw-shucks brand of harmonica, from the #1 hit “Heart of Gold” and CSN&Y’s “Helpless” to deep tracks like “Out on the Weekend” and “Oh Lonesome Me.”

Billy Joel won his claim to fame as the Piano Man, but on that same 1973 song, it was Joel himself who provided the telltale harmonica part that helped catapult the song to legendary status among ’70s anthems. 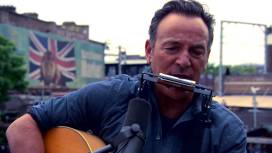 Bruce Springsteen added harmonica parts to his songs as early as on his 1973 debut album (“Mary Queen of Arkansas”) and his classic “Born to Run” (the intro to Thunder Road”).  Later, harmonica was critical to his arrangements for the title track on “The River” and throughout his spared-down LPs like “Nebraska” (1982) and “The Ghost of Tom Joad” (1995). 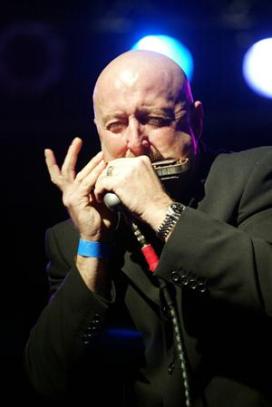 Kim Wilson of The Fabulous Thunderbirds is still among the Top 20 harmonica players mentioned when such lists are compiled.  Check out his playing on such tunes as “I Don’t Care” and “Look at That, Look at That” from the group’s 1986 album “Tuff Enuff.”

Steven Tyler of Aerosmith surprised many when he contributed harmonica to the excellent song “Cryin'” from the group’s 1993 LP “Get a Grip.”

John Popper of Blues Traveler emerged as one of the top harmonica players of the ’90s, especially on incredible tunes like “Run-around” and “Hook” from their Top Ten LP “four” (1994).

Tom Petty added the harmonica parts to his song “You Don’t Know How It Feels” on the 1994 “Wildflowers” album.

Because harmonicas are inexpensive and portable, many people without much musical talent have picked them up and tried to play them without success.  (Perhaps you have a friend or family member who has done this!)  Their lame results have caused the harmonica to suffer some undeserved belittlement as a serious musical instrument, lumping it in with the kazoo and the recorder.  This is unfair…but it has sparked humorous cartoons like the ones below: 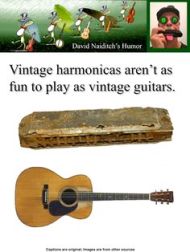 And then there are one-liners like:  “I play the harmonica…but the only way I can play is if I get my car going really fast, and stick it out the window.” — Comedian Steven Wright

A little-known fact about the harmonica is its healthcare benefits.  Because of the sucking and blowing of air required to make it work properly, the harmonica has been used in pulmonary rehabilitation programs to help patients regain lung capacity.  How many instruments can make that kind of claim?

Let us conclude by praising Tom T. Hall, award-winning country singer-songwriter, who in 1983 came up with “The Harmonica Man,” which told the story of an old man who longed for, bought, and eventually died holding a harmonica he’d seen in a storefront window:  “An old man stood and stared into the music store window, and he saw a sorta harmonica lyin’ there in the sun, he thought of the music the harp could be playing, he closed his old eyes and he started to hum… Well, he bought the harmonica and he took it on home, with his youth all behind him and livin’ alone, he soon learned to play it as pure and as cool as any great master musician could do…”